Fashion Scoops: You Don’t Say … In Her Fashion … Another Olivier Twist …

YOU DON’T SAY: Been wondering what LVMH Moët Hennessy Louis Vuitton chairman Bernard Arnault makes of all the speculation swirling around Gucci Group, and the possibility that Tom Ford and Domenico De Sole could leave if their autonomy is... 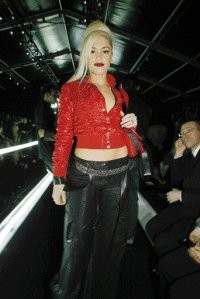 YOU DON’T SAY: Been wondering what LVMH Moët Hennessy Louis Vuitton chairman Bernard Arnault makes of all the speculation swirling around Gucci Group, and the possibility that Tom Ford and Domenico De Sole could leave if their autonomy is compromised by Gucci’s majority owner, François Pinault? At a news conference Tuesday morning to announce LVMH’s 2002 profits, Arnault made a statement that caused the audience of analysts and journalists to gasp. Boasting about the design talent in his group, from John Galliano and Marc Jacobs to Hedi Slimane, he quipped: “We get along with our designers,” he said, “and they are treated in a very professional way.”

This story first appeared in the March 7, 2003 issue of WWD. Subscribe Today.

Meanwhile, on Thursday afternoon, Gucci’s London press office released a brief statement addressed to “all fashion teams and subs” asking them to amend their magazine credits to read “by Gucci.” Most editors were already aware six months ago that Gucci Group had dropped Ford’s name from both the Gucci and YSL credits. But why put it in writing now? Sources close to Gucci say it was just a simple clarification for those editors who were still confused about what to do. But it seems the statement has sparked more questions and answers, fueling speculation about whether Ford and De Sole will stay or leave the group when their contracts expire next year. A Gucci spokesman could not be reached for comment.

IN HER FASHION: Tight clothes are fine. But Gwen Stefani, who is launching her own fashion line under the L.A.M.B. label, doesn’t like the tight deadlines of the fashion business. “It seems so glamorous and fun until you have to start thinking about keeping to the seasons,” complained the No Doubt front woman on the sidelines of the Christian Dior show. “I’ve just started working on my collection and I’m learning fast that it’s a real drag. I hate having to be on time.” Stefani also waxed on about her new married life with fellow rocker Gavin Rossdale of Bush. “It’s about the best thing in the world I’ve ever done. The best!” But Stefani didn’t only have love on her mind. She also had something to say when it came to the possibility of a war in Iraq. “I think it will affect music a lot,” she mused. “I’ve always tried to avoid getting political in my songs. I didn’t think war would happen in my lifetime.”

ANOTHER OLIVIER TWIST: Speculation is building that Olivier Theyskens, who showed his first collection for Rochas Thursday night, might be plotting a foray into couture as early as next January. Theyskens could not be reached for comment.

COME SAIL AWAY: Christian Lacroix is quickly turning into a very sporty guy, thanks to his new design duties at Pucci. After his show in Milan last week, a yacht builder approached him about designing interiors. And Laudomia Pucci also has Lacroix working on one of his biggest designs to date: The sail for a boat that is slated to make its debut in St. Tropez this summer. “It’s really like a very big scarf,” Lacroix said with a laugh.

A PRESSING ENGAGEMENT: Milla Jovovich hasn’t been front row at any shows in Paris, but she’s having an eventful week. She just wrapped up shooting the advertising campaign for a new Emporio Armani fragrance with Peter Lindbergh and actor Justin Chambers. On Thursday, she was holed up at the Costes hotel reading three movie scripts. Oh, and her personal life is evolving, too. On Tuesday night, her boyfriend, the film director Paul W.S. Anderson, dropped to one knee in the Place Vendôme and proposed after a glamorous dinner at the Ritz. And yes, she said “Yes.”

EARLY BIRD: Is Stella McCartney on a collision course with Chanel over their abutting shows on Monday morning? You bet. Sources said McCartney is “freaking out” over the fact that some 52 models, including most of the majors, have already been reserved by Chanel for a minimum of three hours before its 11 a.m. show. McCartney is slated to show at 9:30. Final casting decisions won’t be made until the weekend, but precedent suggests McCartney might have a tough go. Other designers who have abutted Chanel have been able to negotiate to use one or two top girls. But there’s no love lost between McCartney and Chanel designer Karl Lagerfeld, who has had few kind words for the British designer since she succeeded him at Chloé in 1997.

BIRTHDAY BLUES: “I’m the unlucky one,” model Karolina Kurkova said backstage before the Christian Dior show Thursday. The statuesque blonde was bemoaning the fact that her birthday always falls during the ready-to-wear shows. But Kurkova, who turned the ripe old age of 19 last week, wasn’t going to let work get in the way. “There are a lot of parties happening this week,” she said. “I’ll consider that as celebrating.”

GO ASK ALICE: A young girl is waiting for her friends in front of the Louis Vuitton shop on Ometesando in Tokyo. Oops! She drops her cell phone. A giant panda, covered in multicolored LV logos, arrives to her rescue. Uh-oh! Panda picks up the phone and eats it. Then he eats the girl, who goes swirling down a tunnel lined in Damier checks to a strange world peopled by creatures with onion-shaped heads and flower-shaped hats. That’s the storyline of a psychedelic, yet charming five-minute animated film by Japanese artist Takashi Murakami that just bowed at major Louis Vuitton stores around the world, including Paris, London, Berlin, Moscow, New York, Hong Kong, Shanghai, Tokyo and Florence. Murakami, who collaborated with Vuitton creative director Marc Jacobs on spring accessories, titled the film “Girl Meets Monogram.” But no worries — there’s a happy ending. The girl emerges unscathed. The film, and the windows, announce the arrival of the hotly anticipated leather goods, starting with limited-edition “eye love” and cherry-blossom pieces this month, and multicolored monogram items in April. At a special screening Thursday night, Murakami was musing about seeing his art work on the streets. “I haven’t seen anyone with one yet,” he said. “Maybe in another month.”

Meanwhile Louis Vuitton chief Yves Carcelle and model Eva Herzigova were seeing nothing but. After an impromptu photo session, Herzigova dutifully handed one of the multicolored bags back to its minder. “We’ll have to get you one of those, Eva,” quipped Carcelle. “Make it even more than one,” Herzigova parried.

KATE’S DEBATE: Kate Moss gave some rare — and frank — answers to sticky questions Thursday during a live Web cam interview aired on Nick Knight’s fashion Web site, SHOWstudio.com. Moss fielded questions from friends — including Alexander McQueen, Marianne Faithfull and Naomi Campbell — on everything from sex, love, motherhood and pole dancing. She named Mario Testino her “number one” photographer, and squashed rumors that her partner — and the father of her child — Jefferson Hack wants to marry her. “He hasn’t [proposed],” she said, adding: “He is the sweetest man I’ve ever met. Definitely.” (For more on Kate, see Suzy, page 4.)

FLORE SHOW: Chloé fan Kylie Minogue arrived at the house’s party at Café de Flore to celebrate its 50th anniversary Thursday night hand-in-hand with new flame, French actor Olivier Martinez. So much for either of them pining over former loves Justin Timberlake and Mira Sorvino.