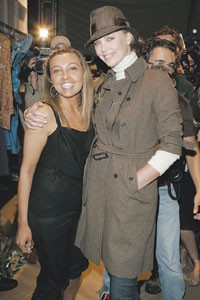 YOU’VE GOT A FRIEND: When celebrity shutterbug Andrew Macpherson photographed Gerda Theron‘s recent wedding for his friend — and the bride’s daughter — Charlize, the Oscar-winner decided to return the favor. So Theron, in trenchcoat and fedora, braved the torrential rains late Monday in support of Macpherson’s companion, designer Pegah Anvarian, who graduated to the main tent at Mercedes-Benz Fashion Week at Smashbox in Los Angeles. “I’ve been wearing [Pegah’s] things to smaller events, but after this you’ll definitely be seeing me in more. I thought it was really beautiful,” said Theron, who would pose for the media circus only inside (save for WWD backstage) — and strategically in front of Anvarian’s name on the runway backdrop. With her was Ivana Milicevic, incognito in a beanie and scarf. A few seats down from them, longtime Anvarian supporter Tracee Ellis Ross watched with her fellow stars on “Girlfriends.” Anvarian was already clicking her heels, thanks to a limited-edition collaboration with Manolo Blahnik. The strappy, super-high sandals will sell exclusively at Des Kohan in Los Angeles.

INTERIOR WAYS: Jamie Drake, the decorator whose personality matches the vibrant interiors he designs for clients such as Madonna and Mayor Bloomberg, will celebrate the publication of his first book by hosting a bash at Pace Prints tonight. The Mayor himself is expected to show up to toast Drake for his tome, “New American Glamour,” out from Bulfinch Press. As well he should, since he’s been a Drake devotee for 18 years. Not only is Drake responsible for Bloomberg’s town house, he also painstakingly refurbished Gracie Mansion on Bloomberg’s watch. Not that public scrutiny would make Drake buckle under pressure — the angst of the first-time author is certainly not for him. “I think we had it pretty easy,” he said jubilantly on Tuesday, fresh from transforming the rooms at Pace into one of his signature lush interiors. “From signing to the party, it’s been 11 months. Pretty fast for publishing!” Nor did he pause from his regular responsibilities as the design guru to the jet set: Drake was simultaneously working on projects as far-flung as a Parisian duplex, a Saudi Arabian villa and an Upper East Side penthouse. “We’re still super-go, me and my staff,” he said.

It’s clear from the pages of his book that Drake is proselytizing for the use of sumptuous hues to his worldwide clientele. “I’ve always been attracted to color,” he explained. “When I discovered my childhood drawings,” which are included in the book, “I realized my taste hasn’t changed since I was 10.”

BIDDING NIGHT: The annual Henry Street Gala might see some competition among the likes of Valesca Guerrand-Hermès, Vera Wang and Dayssi Kanovas. They’ll be fighting over the hot-ticket auction items from Missoni, Fendi, Roberto Cavalli and Calvin Klein, jewels by Pomellato and Anthony Nak, and a photo session with Elle creative director Gilles Bensimon. Luckily, Christie’s auctioneer George McNeely will be on hand at the Oct. 25 event to keep order.