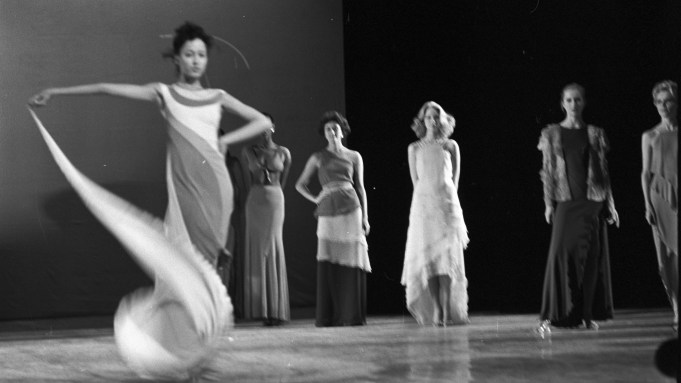 “Americans came, they sewed, they conquered,” a front-page headline declared in WWD on Nov. 30, 1973, pronouncing the winner of the Battle of Versailles.

That landmark fashion show, anointed as the “Battle” by WWD’s legendary editor John B. Fairchild, pitted five French designers against five from the USA and became one for the history books. It was unique in its conception, and stupefying in its execution and outcome, partly because the French had spent an estimated $30,000 each for elaborate stage sets, while the Americans came with backdrops that didn’t fit the stage, leaving them to rely on canned music, pools of light, some snazzy choreography — and chutzpah to spare.

It was a triumph of sportswear ease over couture fussiness, and something of a cultural moment in that the stars of the show included Stephen Burrows, a Black designer whose vivacious jersey gowns were praised to the heavens by competitor Yves Saint Laurent, and 10 Black models, including Bethann Hardison, Billie Blair, Norma Jean Darden and Pat Cleveland, each captivating and original in their way of walking, twirling and emoting.

The event has perhaps the longest tail of any fashion show or fund-raising gala. It spawned an exhibition at the Costume Institute of the Metropolitan Museum of Art in 1993, a book by Washington Post scribe Robin Givhan in 2015, and two documentaries, released in 2012 and 2016. A movie treatment for HBO, written by Ava DuVernay and based on Givhan’s work, is still in the works. In 2011, the Huffington Post handed its Game Changer Award to the African American models at the Versailles event.

Writing under the nom de plume Marie Antoinette Esterhazy, Fairchild detailed the extravagance of the event. He pilloried elaborate sets erected for the French designers, calling them “so tacky they weren’t even camp.” Cardin had a rocket ship; Dior a pumpkin-shaped carriage; YSL a “mile-long Bugatti chugging on stage;” Ungaro a rhinoceros pulling a gypsy cart. The French contingent also featured a 40-piece orchestra, dancers from the Crazy Horse cabaret, Rudolf Nureyev and musical icon Josephine Baker.

It all seems prescient of recent runway razzmatazz, with major European heritage houses constructing elaborate sets and hiring marquee entertainers, albeit with more flair and aplomb.

The American designers at Versailles had Liza Minnelli, dramatic pools of light — and energy to spare. Esterhazy, née Fairchild, enthused that “the American mannequins knew how to move in the clothes they showed.”

The serious method of French fashion shows in those days — models carried numbers, and walked without music, hips thrust forward — would yield to more animated displays in subsequent years. (Forever cheeky, Jean Paul Gaultier long mocked the old system at his couture shows by conscripting the likes of Catherine Deneuve to call out the numbers of each look, along with a saucy description.)

Beyond show business, the Versailles showcase marked the beginning of the “internationalization of Paris” as a fashion capital, according to Didier Grumbach, longtime head of the Chambre Syndicale, French fashion’s organizing body. He noted that English designers Jean Muir and Ossie Clark, plus Japan’s Issey Miyake, also began showing in Paris around that time, giving the French a run for their money.

The fund-raiser, viewed as a promotional event, did not generate much media attention then, or in subsequent years, in France, though it was meaningful and impactful for the U.S. industry, according to Grumbach. American licensing firms, until then focused on a roster of French names, began to see the potential in designers like de la Renta and Bill Blass.

Observers agreed that the 10 Black models selected by the American designers not only owned the night, but impacted the French fashion establishment.

Grumbach notes that André Courrèges, Ungaro and Saint Laurent used Black models since the Sixties, but not as extensively as post-Versailles.

Hardison, who caused a sensation with her steely confidence and dramatic throw of her gown’s lengthy train, characterized the presence of so many Black models that night more as an expression of the freewheeling, progressive Seventies era than a manufactured statement about diversity.

She noted that each model had to be selected by three of the five American designers, and “it was a balanced cabine,” she said, using the French term for fit models. “There weren’t only girls of color.”

Yet she doesn’t underestimate their impact. “Mr. de Givenchy was smitten with the girls of color,” she said. “The idea of a Black model inspired him.” In 1979, de Givenchy became “the first couturier to have an all-black cabine,” WWD reported in a front-page story penned by then-Paris bureau chief Andre Leon Talley.

According to Hardison, the popular music that soundtracked the American segments, played from cassette tape at high volume, was a similar revelation for the French — and a reminder that energy, from the speakers and the models, is a potent ingredient that can make fashion more impactful, and memorable.

Cleveland described the sojourn as one big party, from the moment the models boarded the plane to the cold supper in the royal apartments that capped off the grand fund-raiser. Organized by public relations doyenne Eleanor Lambert and Versailles curator Gerald Van der Kemp, the event raised money for the rickety palace’s renovations.

And while the French presentation came off as stiff and old-fashioned, the American segment pulsed with the vibrancy of the groovy disco era, and a more liberated view of femininity.

Cleveland said Burrows instructed her and other models to line up at the edge of the stage and strike poses — hence the spontaneous invention of vogueing, according to her.

“We were trying to bring life to the clothes,” she enthused. “It was bodies moving under the flag of creativity, of design.”

That the American contingent chose to have many Black people representing fashion had a big impact on French shows in the coming years, Cleveland said.

Donna Karan, then Anne Klein’s right hand — and pregnant with her daughter Gaby — lamented that her boss “wasn’t exactly welcomed as a woman.” She noted that Klein was the only designer shunted to the basement of the chilly palace to prepare her segment.

“It took Paris by storm, there was no question about it,” Karan said. “The French were so in shock of the American clothes. ‘What do you mean you don’t have hooks and eyes and you just throw them on?’

“The Americans were just so far into the future. It was about ease of dressing, day to night,” she continued. “[Klein] was ahead of the game.”

Following Klein’s death from cancer in 1974, Karan and Louis Dell’Olio jointly took up the design reins, with Karan bringing a bit of inspiration from the battle.

For their second fall collection, Karan chose to parade it at The Winter Garden Theatre. “I think I was a little Versailles-driven,” she recalled. “Everybody stood up and it was just like being in Versailles again and they realized this was a show.”

Indeed, the collection landed on the front page of WWD on May 10, 1976, with the paper declaring that “it was like an opening night on Broadway.”

What’s more, the clothes triumphed, with one retailer lauding them as “still fresh-looking even after seeing sportswear in Europe for three weeks.”