Fashion Shows Its Classical Side

Fashion industry executives got some classic treatment Tuesday, when Josie Natori and Georgia Frasch were hosts of a champagne cocktail party for the Orchestra of St. Luke's. 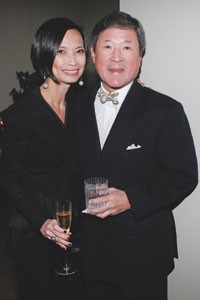 NEW YORK — Fashion industry executives got some classic treatment Tuesday, when Josie Natori and Georgia Frasch were hosts of a champagne cocktail party for the Orchestra of St. Luke’s.

About 50 guests, including Mark Badgley and James Mischka, Elie and Rory Tahari, Tiffany Dubin, John Pomerantz, Ron Frasch and Vera Wang and husband Arthur Becker listened to a chamber music recital by three string players, a flutist and a pianist. The music, which included Mozart’s “Requiem,” was played at the Manhattan home of Josie and Kenneth Natori.

The orchestra appeared at Carnegie Hall on Thursday with principal conductor Donald Runnicles on the podium, also for a performance of “Requiem.” Marianne Lockwood, executive director and founder of St. Luke’s, said Josie Natori joined the organization’s board after the orchestra accompanied Natori’s piano recital at Carnegie Hall in 1997.

“We had to do something in honor of Josie and everything she has done for us,” Lockwood said.

Georgia Frasch, who also recently joined the St. Luke’s board, said, “I just adore chamber music, so much so I had Bach ‘Cantatas’ played at our wedding. But I told my husband, ‘This is a wedding, not a recital.'”

Georgia and Ron Frasch, who is vice chairman of Saks Fifth Avenue Enterprises, were married in 2002 at the Natori’s home in Pound Ridge, N.Y.

Meanwhile, cocktail chat ranged from the 20-year history of St. Luke’s performing in major halls, schools and private homes, to diet advice for the fashion-conscious and a new generation of contemporary opera, such as “Doctor Atomic,” which was conducted by Runnicles and was a three-week sellout this month at the San Francisco Opera.

Jana Klauer, an internist and nutritionist who penned “How The Rich Get Thin” (St. Martin’s Press), due out in January, gave pointers to guests on how to maintain a slim figure.

“You must exercise every day, curb your cravings and eat protein,” Klauer said. “I decided five years ago it was diet that was responsible for a lot of my patients’ illnesses, such as high cholesterol, osteoporosis and diabetes.”

Runnicles said he was “very encouraged” by the new opera’s success.

“It’s a deeply disturbing subject and has caused much debate and controversy,” he said. “I think it will enable some [opera] companies to choose subject matter that is close to us, less about being historical and more to which we can relate today.”

“Doctor Atomic,” created by John Adams, is about physicist J. Robert Oppenheimer and the project to develop the world’s first atomic bomb. The cast is ultimately confronted with the moral crisis of using the weapon on Japanese citizens at Hiroshima and Nagasaki.