The reason for such an honor? The fashion veterans, along with executives from Macy’s... 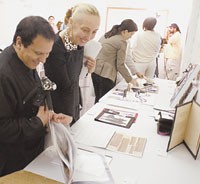 The reason for such an honor? The fashion veterans, along with executives from Macy’s West, were in town to judge the final design projects at the Academy of Art University fashion show, in which 20 seniors presented their final designs. After the one-hour runway show, Alaïa and Sozzani picked up their honorary doctorates from the university, which is the largest private art and design school in the U.S. Guests included Vanessa Getty and Tatiana Sorokko, both dressed in Alaïa couture, as well as Suzy Menkes and retailer Wilkes Bashford.

Sozzani, owner of Milan’s famed Corso Como 10, awarded internships at her company to two students: Kia Faulkenberry-Lewis, a bachelor of fine arts textile major whose designs were inspired by the Art Nouveau and Art Deco periods, and Jamie Mihlrad, a fashion design and knitwear master of fine arts student who had been an intern at Marc by Marc Jacobs. Meanwhile, Alaïa awarded his own design internship to knitwear student Jeehyun Shim, and Macy’s executives selected eight students to present their designs on the runway at Macy’s Passport shows, set for San Francisco and Los Angeles in September.

“I loved the students’ mix of colors, and the freshness of their ideas and drawings,” Sozzani said. “Many of the concepts and patterns were very charming and original, and could be applied to a range of textiles. It’s impressive the way students work them out technically, then realize their designs.”

“I love to encourage students rather than judge them,” Alaïa added. “Their work is modern, not retro. Some of the knitwear is especially creative and impressive.”

There were several design standouts during the show. Mihlrad’s bubblegum pink tuck-stitch sweater featured knitted appliqués of Art Nouveau tree motifs, while Ya-Wen Mathilda Chang’s cobalt wool crepe jackets and tops were decorated with intricately folded collars and corsages. And Staci Snider, who said she was inspired by Hemingway and the Riviera, sent out a green chiffon dress with a low-slung gold belt, worn over dark brown tights.

While Sozzani and Alaïa spent most of their time here at the university, the two friends (they run a new three-suite hotel together in Paris) squeezed in a quick tour of the city; Haight Street and Chinatown were their first stops. “The people were wearing flowers in their hair and theatrical dresses [on Haight Street], as if it was still the Summer of Love,” said Alaïa, who had never before been to San Francisco. “They weren’t even born in 1967.”