Top collections for fall in the City of Light based on Style.com page views during the first 12 days they were posted online.

By Cecily Hall and Emily Kaiser on March 30, 2006
View Slideshow 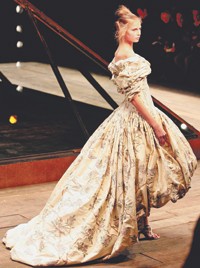 Top collections for fall in the City of Light based on Style.com page views during the first 12 days they were posted online.

1. ALEXANDER McQUEEN
Page views: 1,751,794
Leaping to the top of the rankings from October’s spring showing at number seven, McQueen showed bustled and tartan skirts and tulle dresses. A highlight was the closing note: a 3-D image of Kate Moss, projected onto a glass pyramid, wearing a McQueen gown.

2. CHANEL
Page views: 1,444,030
Karl Lagerfeld opened with evergreen tweeds and narrow-cut coats, then moved into fresh sportswear from the Sixties, including sweater dresses, capes and knits. He also continued his haute Victoriana theme, “working in a few wicked frills along the way,” said WWD.

3. BALENCIAGA
Page views: 1,419,938
Considered a “reference collection” for an upcoming museum show devoted to Cristobal Balenciaga, relaxed jackets and blouson-back dresses were gorgeous and creative, but Nicolas Ghesquière seemed more caught up with showing off a retro fest versus a fall collection.

This story first appeared in the March 30, 2006 issue of WWD. Subscribe Today.

5. CHRISTIAN DIOR
Page views: 1,244,781
If you love jackets, check out John Galliano’s Dior collection for fall. “He showed them in everything from printed felt to rubberized linen,” WWD said. He went crazy with skins, too. His Goth girls even adorned coats over glorious evening gowns.

7. VALENTINO
Page views: 1,071,430
Black and white were in abundance for Valentino this season, evident in his overcoats, A-line skirts and slim wool trousers in the two shades. Color showed up after a while: He threw in a green mohair jacket, an embroidered gold lace shirt and a sheer chiffon blouse in eggplant.

8. YVES SAINT LAURENT
Page views: 1,036,666
Though WWD noted that Stefano Pilati’s vision for the label is “still in development,” this is a house dedicated to sophisticated, yet sensible, sportswear. He brought out some playful skirts and blouses, but “weighty fabrics and decoration made for heaviness of mood and appearance.”

9. JEAN PAUL GAULTIER
Page views: 1,014,707
Fashion’s dark side could be found at Gaultier. Fortunately, the designer showed off beautiful, evocative clothes, said WWD, and the collection moved up the rankings by three notches. “Gaultier’s corpse brides looked prettily so. They were decked in broodingly romantic regalia.”

10. STELLA MCCARTNEY
Page views: 913,797
Empire-waist dresses and tailored cashmere coats made Stella McCartney’s fall collection for Paris one of her best ever. WWD called it “everyday sophisticated dressing,” where McCartney succeeded in pulling off looks that were “grown-up, but not stuffy.”

13. MIU MIU
Page views: 851,361
Miu Miu shifted its show to Paris from Milan this season and the trendy and chic side of Miuccia Prada was as sophisticated as ever. Miu Miu showed an expanded collection of minidresses that ranged from “iridescent taffetas and brocades to one of a mélange of spliced knits.”

14. VIKTOR & ROLF
Page views: 837,046
Viktor Horsting and Rolf Snoeren pulled inspiration from the Fifties. They mixed old classics with bold new design and the result was “a show of little black dresses and white shirts alongside clothing with various parts that were dipped into liquid silver,” said WWD.

15. GIVENCHY
Page views: 797,761
Despite the trouble Riccardo Tisci is having in re-creating the Givenchy brand, the young designer pulled off some beautiful pieces, such as his tailored coats and velvet dresses. But his lack of direction is evident. “No clear picture has emerged — looks seem as if they had been pulled straight from the archives,” WWD said.

16. DRIES VAN NOTEN
Page views: 784,456
Elegant and refined sum up Van Noten’s show, which gave the feeling of afternoon tea in the royal court. From the sweets served to the “regal coat and rich embroidery of skirts,” Van Noten “presented a sophisticated collection that relied on his well-traveled roots.”

18. CELINE
Page views: 701,206
WWD was confused by “airy chiffon dresses, belted coats and tailored suits that swung between a dowdy redux of vintage silhouettes and tricked-out stabs at trying to add modern-girl vitality.” Ivana Omazic did impress with a pleated-bodice dress and cashmere sweaters.

19. JOHN GALLIANO
Page views: 676,161
It was a theme of cowboys and Indians for Galliano’s own label this fall, which fell six places in the rankings from the spring shows. WWD said, “What the laid-back look lacked was the high-voltage glamour and fabulous folly his fans adore.”

20. YOHJI YAMAMOTO
Page views: 592,574
Yamamoto stuck with the men’s wear concepts he is famous for having perfected, showing “huge pantsuits with three sleeves and 50-inch waists and would-be skirts somehow connected into pants,” WWD said. The collection was dominated by volume and a dark color palette.

Source: style.com; the web site has a monthly readership of more than 1.3 million; the average age of the audience is 35.4 and the median income is $75,000; 86 percent of readers are female