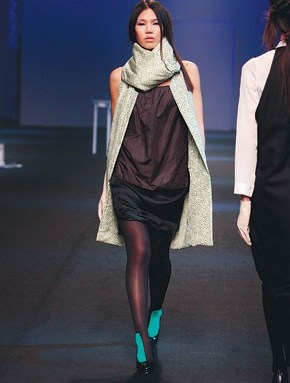 SEOUL — Seoul aspires to become the fifth major international fashion city — and Seoul Collection is part of that drive.

The runway shows, organized by the Seoul Fashion Centre, take place twice a year in the South Korean capital and started in 2001. In the past, the season was as long as 11 days and this year it was eight days with 52 collections presented. The first two days of this 16th edition of Seoul Collection, held from March 17 to 24, were devoted to men’s wear, with the remaining six focused on women’s wear and a spattering of children’s wear mixed in.

On the penultimate day, Oh Se-Hoon, the mayor of Seoul, who is known for his passion for fashion and worked as a fashion model before winning office in 2006, made a surprise visit to the event. Earlier this year, he led a group of designers to visit some key fashion cities in Europe to promote South Korean fashion. Overseas visitors included Jean-Pierre Mocho, president of the French ready-to-wear federation, La Fédération Française du Prêt-à-Porter Féminin, and Anna Orsini, head of London Fashion Week International.

Each show lasted about 30 minutes with looks ranging from the outdoor and casual to elaborate eveningwear. The shows themselves featured everything from clouds and mist to sparkling confetti falling from the ceiling.

Leading Korean designers such as Moon Yong Hee, Lie Sang Bong, Chang Kwang Hyo, Gee Choon Hee, Song Zio, Park Choon Moo, Lee Young Hee, Andy & Debb, Rubina, Kim Dong Soon, An Yoon Jung, Jung Hun Jong and Kang Kiok were among the presentations. Many of them have participated in exhibitions and fashion shows outside South Korea. Moon Yong Hee was the first Korean designer to set up in Paris (in 1992), and was soon followed by others such as Bong, who has been presenting at the Paris shows since 2002.

For the finale, the creations of eight young designers were showcased. Each of the designers will receive support from the Seoul government to grow their businesses through programs such as participation in international fashion events, developing co-branding and assistance in opening an online shopping mall.

The expansion of Seoul Collection fits in with the government’s drive to create an advanced economy.

The South Korean fashion market is worth about $12.6 billion a year, to rank 11th in the world. Fashion exports total about $15.3 billion annually. Seoul accounts for about half of the overall fashion market in the country, which has about 67,000 fashion-related businesses. More than 90 percent of South Korea’s 50,000 fashion designers are located in the capital city .

Backed by the Ministry of Culture Industry and Education, the Seoul metropolitan government targeted several key industries worthy of extra support and the Seoul Business Agency was created to carry out the mandate. Fashion is one of the identified industries.

The Seoul Fashion Centre, the fashion arm of the SBA, was established in 2000 and collects and provides information to the fashion industry. It initiated many programs to support the industry with the goal of making Seoul a world-renowned fashion city. SFC also helps Korean designers participate in fashion shows abroad.

Hahn Seong-hee, the director of SFC, said the Seoul event must first become the premier fashion week in the Far East before it can think of joining the ranks of New York, London, Milan and Paris. As a result, SFC hopes to expand its shows to include designers from elsewhere in Asia. In addition, it is their plan to make Seoul Fashion Week a citywide celebration of fashion.

To become world class, Korean designers must develop their own style by translating Eastern styles into a modern look, said Bong.

Hwang Jae-bock, the president of KFDA, said his association hopes to recruit more young designers and help them market abroad.