With its nonchalant mix of sexy edge and tomboy twist, the Heimstone label has drawn comparisons to another cult French brand — Isabel Marant. 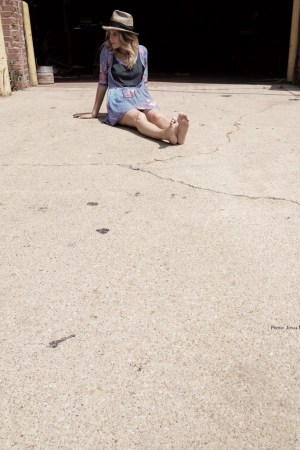 With its nonchalant mix of sexy edge and tomboy twist, the Heimstone label has drawn comparisons to another cult French brand — Isabel Marant. Launched by Alix Petit five years ago, Heimstone has remained under the fashion radar as Petit has focused on quietly opening two stores in Paris (and, as of last week, e-commerce at Heimstone.com) rather than pursuing the spotlight during fashion week. As her profile rises, it’s becoming harder for Petit to maintain her self-described fashion outsider status.

WWD: What were you doing before you launched Heimstone?
Alix Petit: I studied art for one year. Then I did fashion school for three years and I specialized in knits. That’s how I got my first job at Michel Klein — I was in charge of the knits for his two lines. That was for like six months, and then I thought, “It’s kind of cool, but I want to do my own line.” Three months later I said, “OK, I’m going to quit and start my own line.” Heimstone was supposed to be an accessories line at the beginning. Then I started to do some swimsuits. Then I said, “OK, now I want to do some clothes.” So it became a full collection.

WWD: When did you open your first store?
Petit: October 2007. So six months after I launched my first line.

WWD: What’s the Heimstone aesthetic?
Petit: It’s really clothes for girls who want to be sexy, but who don’t like to dress like a sexy girl. For example, dresses in nice fabrics with a neckline that’s very wide, very open, so she can show her skin. But at the same time, it’s an oversize dress. I like girls that dress like men, so I want my girls to look like that. Not too girly with too girly details. It’s not just like a pink silk dress — it’s pink silk with leather and zippers. It has kind of a boyish addition, but at the same time, it’s very sexy.

WWD: Where did the name Heimstone come from?
Petit: It’s two words that I put together. At the beginning, it was Heim. I didn’t want to have a name meaning something or being too French. I liked Heim because when you write it by hand, it’s very round and very feminine. But it was too feminine so I put ‘Stone’ behind it to add something boyish.

WWD: What are some of your design influences?
Petit: I’m really not involved in fashion that much, meaning I don’t really care about other brands or what they do. I like some brands, like Proenza Schouler — I really like what they are doing. It’s more about nature and open spaces, art, music — everything that is not proper fashion. It makes more sense to me because I really feel in some ways, I’m not part of the fashion scene. I have never been a big shopping girl, being crazy about this and that from this and that brand. But I really like all the fabrics and textures, the materials and mix of colors. That’s how I ended up in fashion, but I’m not really crazy about clothes.

WWD: Are you planning to show during Paris Fashion Week next season?
Petit: Not yet. I’m going to keep doing a press presentation for the moment and maybe show in two seasons. I don’t want to do shows because, first of all, it’s a lot of money to invest. And when I do something, I like to do it well, and not because I’m rushing. But as soon as I have the budget, I will definitely do it because I like to tell a story about something.