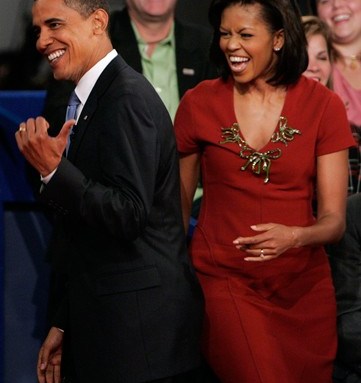 As their husbands paced the stage at Nashville’s Belmont University Tuesday evening, Cindy McCain and Michelle Obama took the opportunity to show their true — or rather, patriotic — colors. McCain wore a royal blue suit, and Obama, a paneled cranberry red Narciso Rodriguez dress (curiously, the sparkly green ribbon pins at the neck said “Christmas” more than “campaign countdown”). Both women also stuck close to their established looks — see McCain’s sleek navy pantsuit in Ohio, Obama’s snappy striped T-shirt layered under a short-sleeved turquoise jacket in Michigan — while Obama continues to limit her appearances (and thus opportunities to entice the fashion press) as she juggles campaign duties with parenting two school-age girls. Gov. Sarah Palin, meanwhile, traded in her skirt-and-blazer combo for jeans and a Nike track jacket for debate-watching at a Greenville, N.C., pizza parlor (this may be Palin’s TV-watching outfit — she wore an orange track jacket while watching the last one). For her own prime-time appearance against Sen. Joe Biden, however, Palin went with listen-don’t-look, no-frills black, though her shiny patent red pumps lent a certain Dorothy-in-Oz quality to the ensemble. In fact, Palin appears to be using her accessories to stay on message: On Wednesday she crossed the tarmac in Allentown, Pa., to meet Sen. John McCain, carrying a canvas tote with a certain animal’s head printed on the side. The words above the antlers? “Real Women Hunt Moose.”