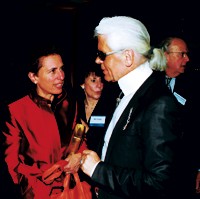 Most people at the annual WWD/DNR CEO Summit focus on immediate, actionable, best-practicey “take-aways,” but that’s not to say there isn’t a little room for some long-term thinking, particularly when cocktails are involved.

As this year’s summit theme centered on “Fashioning the Future,” several guests at an opening-night party at the United Nations were asked to gaze into their personal crystal balls to come up with some industry predictions. Given the unexpected nature of recent fashion developments, more than a few were left scratching their heads.

“Let me ask my psychic,” snapped Donna Karan. But taking in the East River views from the U.N. delegates’ dining room, if not the drab decor, she was suddenly inspired: “You know, the route to world peace is to get the fashion designers in here. They get along better than most people in the world.”

Lars Nilsson, the Nina Ricci designer, suggested there is one constantly evolving characteristic customers will be looking for: “Quality.” Beyond that, “it’s hard to say,” he said. “One year you feel color and the next year you feel black and white.”

Most executives on hand tended to maintain a sunny outlook, seeing in recent designer breakups and executive shuffles the early signs of good things on the horizon. Graziano de Boni, president and chief executive officer of Valentino Inc., pointed out that fashion — and fashion news — is reaching the masses these days.

“Fashion is getting more and more deep into society,” he said. “People overall are becoming more aware of fashion, and they want to express themselves as who and what they are. Fashion is no longer an egalitarian thing the same way luxury is becoming more democratic. I’m very happy about what the future looks like, because it’s fun.”

Claudio Del Vecchio, chairman and ceo of Retail Brand Alliance, pointed out that as the general population becomes more aware of fashion, fashion executives should expand their scope, as well.

“We are in a very fast-changing environment, politically and in business,” he said. “We have to be more aware of what’s going on outside of our own world in order to deliver to the customer who also lives in a much bigger world than he used to. We have to understand how the customer is changing, what they are looking for, what they are interested in, how they react to certain facts and events. If we can learn that, we can deliver better service and be more successful. Everything else is logistics.”

But logistics and specifics certainly will play a part. Take the outerwear business, where executives are always looking to the outside world for signs of the future, their favorite being snowflakes. “What’s affecting me right now is warm weather,” groused Glenn Palmer, ceo of Amerex Group. “We want the weather to get cold so we can do more business and see retail pick up again. I’m more interested in the weather turning cold than I am in Tom Ford.” And Howard Socol, chairman and ceo of Barneys New York, was frankly a little sick of the outside world and all its rumors, like the one that he was an early contender for the top job at Saks Fifth Avenue. “Don’t believe rumors,” he said. “Don’t believe any rumors. I love Barneys.”

Others had specific fortune cookie warnings for the future, like Marc Bohbot, ceo of Brandevelopment, who said, “You’ve always got to be as good as what they want tomorrow.”

Or Jack Wu, president of Rainforest, who said, “In the mass area you have to continue to send the message to men that they can really dress like a woman.”

“What I’m saying is that they should try to dress and look like their age and situation. If they are in business, they have to be more open. We have to try to educate and send the message to men that they can be more passionate about fashion.”

Jeffrey Bezos, ceo of Amazon.com and one of the summit’s keynote speakers, pointed out that the fashion category is becoming an important area for his Web site. Looking forward to the start of the event, his thoughts seemed applicable to the future of fashion, as well: “I think it’s still the beginning and I think there is a lot of innovation and invention still to come.”