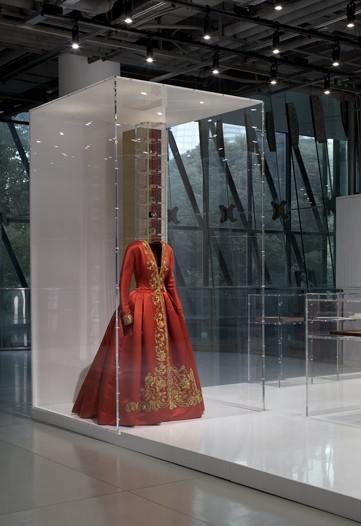 A flurry of displays at major cultural institutions points to an increasingly popular — and potent — method of brand building, particularly in fast-growing emerging markets like Russia and China.

On Monday, “Louis Vuitton Voyages” opens at the newly renovated National Museum of China in Tiananmen Square, displaying everything from a portable zinc and copper trunk bed from 1885 to a graffiti-splattered skateboard in a monogram case, circa 2009.

“Exhibitions give us the possibility to invent innovative ways of storytelling, and also to enrich our network of friends and family,” said Pietro Beccari, executive vice president at Vuitton, also the subject of a survey at Les Arts Décoratifs here next year that will pay tribute to its founder, Louis Vuitton, and current artistic director, Marc Jacobs, as key figures of the Industrial Revolution and the globalization of contemporary fashion, respectively. “Our exhibitions can be directly inspired by the brand, its history and heritage, or they can be disconnected, allowing artists to freely express their creativity.”

Beccari noted that exhibitions represent a long-standing tradition at Vuitton, stretching back to 1867 when the namesake founder and his son exhibited trunks and luggage at the Paris World Exposition, anticipating the boom in fossil-fueled transportation.

Lines snaking outside the Pushkin Museum in Moscow, currently hosting “Inspiration Dior” through July 24, speak to the popularity of brand-focused exhibitions. And the international cultural calendar is cluttered with a variety of options, from a Jean Paul Gaultier retrospective opening June 17 at the Montreal Museum of Fine Arts and a retrospective of master watchmaker Abraham-Louis Breguet at the Swiss Natural Museum in Prangins to a “Culture Chanel” showcase bowing in November at the National Art Museum of China in Beijing.

“Fashion in general and haute couture in particular are more and more popular for the general public,” noted Thierry-Maxime Loriot, curator of the Gaultier expo, who credits a glut of fashion-themed television programs for fanning its notoriety. “Haute couture can never be seen by the general public, that is why these exhibitions are important, it democratizes access. Even if you attend the show, you never see the incredible craftsmanship and unique savoir-faire of it. You have to see it up close. It is an experience, just like a painting or a sculpture can bring an emotion to the visitor.”

Beccari said Vuitton organizes a lot of trunk exhibitions around the world, “mostly in new markets where there is a particular need to tell the story of the brand.”

He noted, however, that its exhibitions could also be about “broader values that we incarnate, such as the art of travel, the history of Paris or French lifestyle.”

“Luxury is all about emotions, and we believe in the importance of permanently inventing new ways of creating emotional links — not only with our customers, but with a larger public,” he explained.

Paurav Shukla, a University of Brighton-based academic and consultant with a specialty in luxury marketing, noted that luxury brands can carry negative connotations of snobbism and conspicuous consumption, especially in tough economic times. “Exhibitions, especially in world-renowned museums, provide luxury brands an added benefit of going beyond those negative value associations and associate positively,” he said. “In a way, many consumers take the museum’s view as the reality.”

Shukla noted that many museums, once focused on historical artifacts, are striving to embrace contemporary design to remain relevant and attract younger visitors.

“Many brands are old enough to have a strong heritage aspect,” he said. “This fits with the museum’s agenda of being historical and contemporary at the same time.”

Hermès International, which has a full slate of traveling exhibitions in 2011 and beyond, often mounts important displays before having a commercial presence in the country, as it did in the Forbidden City in Beijing in 1998 with a showcase of rare artifacts around a horse theme. They can also run in tandem with new or enlarged stores, which was the case with its “Festival de Metiers” displays of craftsmanship that are in Brussels after having made stops in Chicago, Seattle and Washington, D.C., in the U.S.

“We use it as a tool to help people understand and get to know more about the house,” Patrick Albaladejo, deputy chief executive of Hermès, said.

Last year in Shanghai, close to 50,000 people took in the company’s “Leather Forever” exhibition, held in a space where a future Hermès Maison boutique will rise in 2013. “We’re talking big numbers here,” Albaladejo said, noting that the showcase would make two stops in Europe later this year: in Rome and probably London.

Asked about the payback for such free, open-to-the-public displays, Albaladejo said Hermès never expects an immediate return, even if some customers might rush to the store or the Web site after.

“It nurtures the link between the customer and us, and for people who are not yet our customers. We’re doing it to create the most desirable brand for the long term,” he explained. “We want to work at the root rather than the plant level.…This is a determining factor in creating the desirability and the uniqueness of our house.”

The executive declined to say how much Hermès spends on its exhibitions, but he noted that almost two-thirds of the company’s total communications budget falls outside of advertising, and “exhibitions are an important feature.”

Echoing other observers, Beccari described a “win-win” for brands and museums: “They allow institutions to reach out to a different and broader public, and they also allow us to benefit from their expertise in organizing these exhibitions.”

The Pushkin has been welcoming between 1,500 and 3,000 visitors a day to the Dior showcase, emblematic of fashion’s drawing power at the Moscow institution, which mounted a Roberto Capucci exhibit in 2006 and one dedicated to Chanel in 2007.

Bonami said the museum has no clothing-related exhibitions on its calendar, “but I think as we try to show the 20th century from different angles, I hope we in time will come back to fashion.”

According to Chanel, exhibitions “enrich the perception” of the brand by presenting its history and “fundamental values” in a “modern, comprehensive and interesting cultural approach.”

“We reach a different audience, not only our clients or people interested in luxury brands, but also students, opinion leaders and artists,” Chanel added.

Lucian James, creative director and founder of Paris-based strategic consultancy Agenda Inc., warned that brands can go too far with exhibits, however.

For example, Van Cleef & Arpels’ recent show at the Cooper-Hewitt Museum was criticized in The New York Times as an embarrassment for an outpost of the Smithsonian. “So essentially a hijack of a museum to buy a kind of credibility; where all the promotional text read like ad copy,” James noted.

Still, he said fashion and museums each have a place in the culture industry: Brands get a stamp of cultural approval and museums get younger viewers.

Indeed, James credits the explosive growth of Las Vegas partly to the “interplay between entertainment, museum culture and luxury…at its most creative, messy, and populist.”

Meanwhile, dedicated and permanent monobrand museums could represent the next step in fashion’s exhibitionist path, with a Gucci museum slated to open in Florence this fall, complete with a bookstore, cafe and gift shop.

In a similar vein, a Louis Vuitton-branded art museum, by renowned architect Frank Gehry, is slowly rising over the Bois de Boulogne in Paris. It is slated to open in early 2013.

Since the Nineties, many fashion houses have been quietly organizing and building their archives, readying them for close-ups in museums of many stripes.

“Gucci has an extremely rich archive of vintage items that has never before been accessible to public viewing,” said Patrizio di Marco, Gucci’s president and chief executive officer. “The aim is to develop a dynamic experience where visitors can appreciate and enjoy our history but at the same time understand how vibrant and alive Gucci is today.”