Fashion’s Night Out to Be Repeated in 2010

Mayor Bloomberg, Vogue magazine, the CFDA and NYC & Co. will unveil the return of the event next September.

By David Moin and Marc Karimzadeh on October 28, 2009
View Slideshow 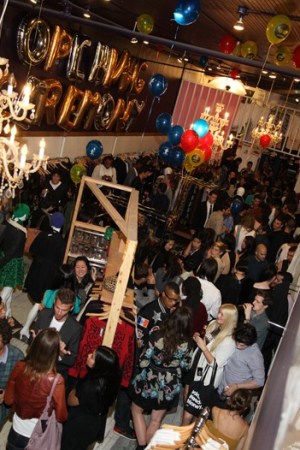 NEW YORK — Fashion’s Night Out, the global shopping event that gave retail a much-needed kick last month, is due for an encore in 2010.

Today, Mayor Michael R. Bloomberg, Vogue magazine, the Council of Fashion Designers of America and NYC & Co. will unveil the return of the event on Sept. 9 — and the plan is to make the second one bigger and better than the first.

This story first appeared in the October 29, 2009 issue of WWD. Subscribe Today.

“The numbers are in, and it’s clear that Fashion’s Night Out was a tremendous success,” Bloomberg said. “Thousands of New Yorkers attended the events in all five boroughs, supporting the city’s retail and fashion industries, and helping a worthwhile cause. It’s sure to be an even bigger event in 2010.”

The first event, which took place Sept. 10, was widely considered a success. In New York alone, more than 700 retailers remained open until 11 p.m., and designers planned special personal appearances or events, with various spots around the city turning into major block parties.

“We were absolutely bowled over by the response to Fashion’s Night Out,” said Vogue editor in chief Anna Wintour. “It was only 15 minutes after the event began, and we were getting reports about lines around the block at stores throughout the city. It was wonderful to see people embrace this initiative, and we are thrilled that they wish it to return.”

CFDA president Diane von Furstenberg added, “To have designers in stores to celebrate and start a shopping season is the best idea for everybody. It creates excitement and lots of business.”

According to an independent study by ShopperTrak, foot traffic in stores jumped by 50 percent that night. Meanwhile, NYC & Co., the marketing, tourism and partnerships organization of the city, conducted a survey of 1,300 shoppers and concluded that 75 percent of them bought something that night. The survey also found two-thirds of those consumers visited stores they have never been to before, and 61 percent ventured out of their comfort zones, going to neighborhoods outside of their work and living areas.

“I think that when the partners planned the first one, it was pretty clear that it was going to be successful, but until we hit the streets that night, I don’t think we knew the extent of the success,” CFDA executive director Steven Kolb said. “As it went into the nights and days after, during fashion week, we talked to all the participants, and there wasn’t one person who didn’t immediately ask when we were going to do this again.”

In the weeks since Fashion’s Night Out, top retailers have been meeting with the mayor and city officials, seeking a repeat of the event and trying to devise strategies to spur shopping and tourism in the city year-round. Specifically for Fashion’s Night Out, some retailers are pressing to make Sept. 9 free of sales tax. There is also a proposal to stage a fashion show for consumers at Lincoln Center, where New York Fashion Week will be held for the spring 2011 designer collections for the first time, instead of at Bryant Park. The show would promote merchandise in the stores, not the next season’s.

It is expected to be challenging to get the required city and state approvals for making the day of Fashion’s Night Out tax-free for retail sales.

“There are a lot of state budget issues,” said one source. The mayor has been pushing for an increase in the sales tax and, recently, the state senate agreed to raise the sales tax by one-half of a percentage point to 8.875 percent, making it one of the highest rates in the country. However, the exemption on clothing purchases for $110 or less remains. The increase applies to the city’s portion of the sales tax, which when added to a state tax and transit tax lifts the total rate to 8.875 percent.

While retailers were pleased with the turnout at the first Fashion’s Night Out, several did acknowledge there was far more partying, gawking at celebrities and autograph-hunting than shopping. But retailers still felt the event did a lot to elevate the industry’s image and at least put some people in more of a shopping mind-set.

And there remains a groundswell of support for repeating the initiative. “I thought Fashion’s Night Out was a terrific event,” said Stephen I. Sadove, chairman and chief executive officer of Saks Fifth Avenue. “It generated traffic and excitement around fashion. It was very focused. It was never designed to generate huge sales, but I do believe incremental sales were generated by the event.”

Michael Gould, Bloomingdale’s chairman and ceo, concurred. “It was a fun evening and it excited a lot of people,” he said. “Like most things, the first time there’s great novelty to it. The second time, there has to be even more substance. We had incredible activity at Bloomingdale’s and a strong sales performance.”

One source said the amount of time to prepare for the second installment will be instrumental in making it a bigger success.

“Last year, the event was pulled off on very short notice,” the source said. “This time, we have a lot of lead time and the ability to strengthen it.”

Like the first installment, Fashion’s Night Out will extend to the city’s five boroughs and beyond, and include international cities such as London, Paris, Milan, Moscow, Berlin, Madrid, Athens, São Paolo, New Delhi, Taipei, Tokyo and Beijing.

Nina Ricci ceo Manuel Puig said he would welcome the opportunity to again take part in Fashion’s Night Out, which was centered on tony Avenue Montaigne in Paris. “It would be good, but it would be best if it weren’t held too close to the Vendange [a wine-tasting event], since these events are similar,” Puig said. “At any rate, Fashion’s Night Out was very good for generating traffic, which was also helped by the warm weather.”

A spokeswoman for Harvey Nichols said, “There was a real buzz at the store….We were at a disadvantage of not being in the main area like on Bond Street in the West End, but…we were very pleased with how the evening went and with the sales figures for the night.”

Liberty in London also experienced a boost in sales. “Compared to the average takings for a Thursday night, we were 40 percent up,” a Liberty spokeswoman said. “There was a huge increase in [foot traffic] particularly to areas of the store that are usually more sedate, like the international fashion floor. It was really lucrative for us.”

“I don’t remember ever seeing that many people in the streets and stores that full,” Ferreri said. “There was heavy store traffic, though I have to say that we did not see any extraordinary sales. Surely, the second time around it will have an even greater effect,” she noted.

CFDA’s Kolb said even though the economy is expected to be in recovery by fall 2010, Fashion’s Night Out still serves an important purpose. Once again, the night is scheduled at the start of New York Fashion Week, and the spring shows will run Sept. 9 to 16. “You often talk about fashion week and it being a trade event that isn’t accessible to consumers,” Kolb said. “This gives consumers a way to celebrate fashion in a direct way.”