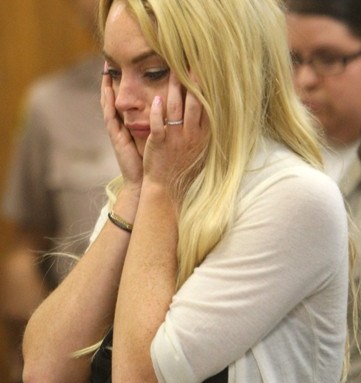 Pros: Leggings make comfortable prison attire. And even if Lohan serves only 25 percent of her sentence, as predicted, it will be a nice media palate cleanser. Like justice-flavored sorbet.

Cons: Lohan has two weeks to potentially do more damage to herself and her brand (albeit with a SCRAM bracelet but access to her prescriptions: Ambien, Adderall and Dilaudid) before she has to report to jail.

Pros: Hilton presides over a perfume empire with Parlux Fragrances Inc.: Her 10th fragrance, Tease, based on Hilton’s fascination with Marilyn Monroe, is set to launch this summer. She also inked a post-prison shoe deal with Antebi Footwear that’s still active, and has a line of hair extensions. Also, she’s still reportedly huge in Japan.

Pros: She reportedly lost more than 10 pounds from her stint in prison. Since being released, Stewart also went back to work full tilt — she launched lifestyle collections for Macy’s and The Home Depot, her own Sirius channel, a line of modular floor coverings (with Flor) and houses (with KB Home) and recently announced that her own video game is in the works.

Cons: Stewart was stripped of her role as chief executive officer of Martha Stewart Omnimedia. The company lost $59 million in 2004 and $75 million the following year.

Pros: The former wild child went on to launch two fashion labels — House of Harlow 1960, which features jewelry, eyewear and footwear, and the contemporary collection Winter Kate. She now has two children with her boyfriend, singer Joel Madden.