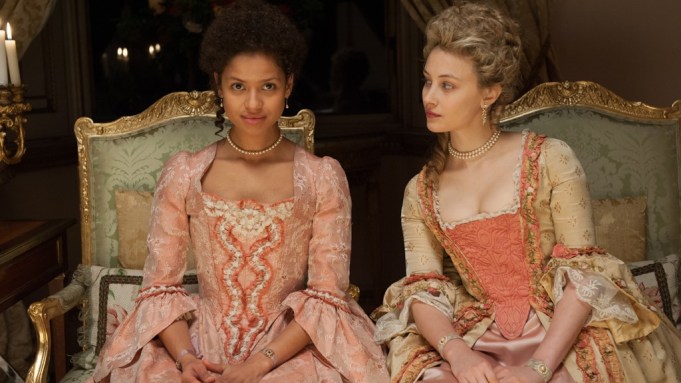 It was 18th-century fashion that played a key role in setting the tone and backdrop for the film “Belle” — the true story of Dido Elizabeth Belle, a biracial woman who had aristocratic privileges, but not the same social status as her white cousin.

“This was no Cinderella story,” said Amma Asante, the film’s London-based director on a recent trip to the U.S.

Dido, the illegitimate daughter of Admiral Sir John Lindsey and a former slave, was orphaned as a child and raised by William Murray. A great uncle from her father’s family, Murray was also the first Earl of Mansfield and later the Lord Chief Justice of Britain. The earl raised her as his own alongside his other niece and Dido’s cousin Lady Elizabeth Murray.

While Dido’s lineage did allow certain privileges, her biracial status prevented her from certain traditions of noble social standing. She could eat with her family, but was barred from sitting with them during a formal dinner. Although she passed away in her early 40s, Dido was said to be instrumental in helping her uncle, in his role as Lord Chief Justice, in a decision that helped to end the slave trade in England.

The film also touches upon some of life’s ironies, with wealth trumping prejudice. Although Dido had to deal with some societal norms, she had it easier than most Anglo-Africans, particularly as an heiress to her father’s fortune. Elizabeth had stature, but was penniless and her lack of wealth in some ways made her more inferior to her cousin.

While Dido’s life is the micro story, with slavery the macro theme, it was 18th-century fashion that almost takes center stage in the film. Asante worked closely with Polish costume designer Anushia Nieradzik to get the right tone and backdrop for the story line, set in the late 1760s at the beginning of the film.

Taking their cue from the painting that once was hanging in London’s Kenwood House — a portrait of the two cousins that was an original fixture at Scone Palace in Scotland, where the earl was born — color charts and mood boards were created for the on-screen imagery depicting life in the 18th century.

“Each woman had about eight to 10 dresses in total. We mixed and matched, and added sheer shifts over a dress to change its color and feel, and then added accessories such as shawls,” Asante said.

The director learned that being fashionable in the 18th century wasn’t easy: “You think that these women dressed beautifully, but they had their diaphragms pushed up [from the tight corsets] and all they can think about is breathing.

“We even made sure the color of the silk lining in the interior of the carriages didn’t clash with the dress the girl is wearing,” the director noted.

She had the girls dressed more in “ice cream pastels” when they were younger and living in the country, and then moved to deeper shades of the same colors to reflect the grittiness of the city when they later moved to Kenwood House. The character Dido was dressed in pinks and then fuchsia and burgundy, with Elizabeth in blues and later teal.

“The corsets and cottons were worn at home. There were bursts of color on the silks for going out for show. It was about how, if you had money, you made sure people knew from what they saw, such as [necklaces with] bigger pearls when they went out,” Asante said of the fashion and accessories that were worn by nobility in that time period.

The jewelry worn by the women were antique pieces, although a few were replicas created from photographs from that period. To keep the feeling of authenticity throughout the period piece, even the food the family ate was typical of that served at the time.

Guga Mbatha-Raw and Sarah Gadon were cast in the roles of Dido and Elizabeth, respectively. The film, distributed by Fox Searchlight Pictures, is currently showing in select theaters in the U.S., with a June release date for the U.K.