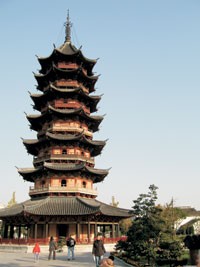 Situated a mere 40 minutes from Shanghai by train, in Jiangsu Province, Suzhou remains a town that time forgot, despite being one of the industrial hot spots of China’s thriving Yangtze River Delta. Suzhou originated as the capital of the ancient Wu Kingdom during the Shang Dynasty in the 11th century B.C., and was consolidated into its current incarnation in 514 B.C. Over the millennia, it has remained a center of regional culture and trade, and it was home to the many mandarins and literati who built the 150 or so Chinese gardens and mansions that attracted some 20 million Chinese and 890,000 foreign tourists last year.

Alongside China’s Grand Canal, Suzhou is also one of the cities known as the “Venice of the East” for its crisscrossing canals, which are plied by boats and straddled by countless traditional bridges. Suzhou’s population of almost six million, about a third of whom live in the city proper, enjoy the highest per capita gross domestic product in China. The city is the third most popular destination for foreign investment in China, with electronics production being the chief industry.

Economic success has done little to alter Suzhou, however, due in part to vigorous preservation and strict building codes. A five-floor cap on downtown buildings allows the ancient pagodas to tower over the streets, making Suzhou one of the few cities in China that still feels distinctly Chinese.

Suzhou’s shopping district centers around the busy pedestrian street Guanqian Jie, which is named after a temple at one end. The area is home to several department stores as well as an array of small shops offering all price levels. The Metro Shopping Center, at 245 Guanqian Jie, is where international brands cluster, and it includes shops such as Zegna, Givenchy and Balenciaga.

Pedestrian underpasses at the entrance to Guanqian Jie under Renmin Lu are crammed with petite boutiques offering the latest hip styles at bargain prices. Among them is the Chinese chain Sanfu, popular outside the largest cities, which offers youth street fashion in the under-$30 range. The Ningbo-based sportswear label Ton Lion is also big in Suzhou, with several locations on Guanqian Jie as well as elsewhere in town.

Entertainment in Suzhou remains as laid-back as the city’s pace of living. An assortment of popular restaurants clusters around Guanqian Jie, but the main downtown entertainment strip is Shiquan Jie. The street’s main drag offers scores of bars, pubs and restaurants, with everything from Korean karaoke—Asian expatriates outnumber Westerners in Suzhou—to trendy minimalist cafes. Young Suzhounese cram into Scarlet, a hip dance club at 441 Shiqian Jie that was established in 1998. Suzhou’s professional and expatriate communities are largely based not downtown, but 15 minutes away at the Singapore Suzhou Industrial Park, at 2 Suhua Lu, which boasts a diverse array of international cuisines as well as several popular expatriate bars.

The Suzhou Sheraton, at 259 Xinshi Lu, is far and away the best hotel in Suzhou, as well as one of the best-designed five-star hotels in China. Its exterior architecture evokes the towers of the old city wall in Beijing, or a gate of the Forbidden City. The interior, however, more resembles the maze-like intimacy of Suzhou’s famous garden manses, with hallways of Chinese windows providing glimpses of traditional rock gardens and of the adjacent Panmen Gate. The labyrinthal layout accommodates 400 rooms and suites while meeting the city’s requirement of not exceeding five floors. Completed in 1998, the Sheraton is located in the heart of downtown Suzhou, and its amenities include an outdoor pool—a rarity in China—allowing swimming among the gardens and a view of Panmen’s pagoda.