The Fashion Center BID is recommending that the city lift a zoning rule that side street buildings set aside half their space for manufacturing. 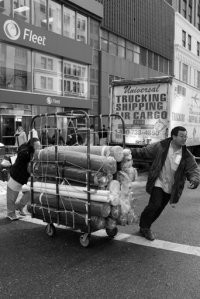 NEW YORK — The Fashion Center Business Improvement District has begun quietly lobbying the city on behalf of a controversial proposal that could permanently change the face of the Garment District.

This story first appeared in the March 11, 2003 issue of WWD. Subscribe Today.

FCBID officials are recommending that city officials lift the special zoning regulations put in place in 1987 that require landlords of buildings on district side streets to set aside half their space for manufacturing. The special preservation area encompasses side street buildings on West 39th and 38th Streets between Seventh Avenue and Ninth Avenue, and on West 37th, 36th and 35th Streets between Broadway and Ninth Avenue.

The FCBID argues that to a great extent, manufacturing has already left the district. Between 1989 and 2000, apparel manufacturing employment in zip code 10018, a larger area encompassing the preservation district, fell 30.6 percent to 14,601, according to “Remodeling the Fashion District,” a 49-page report the FCBID has compiled to support its position. If the decline continues, building vacancies are a likely outcome in the district, FCBID officials contended.

Total fashion-related employment, which also includes textiles and wholesale trade in the FCBID area in 2001 was 49,438, representing 46.6 percent of all jobs in the area, according to the report. The FCBID is roughly bordered by West 35th and 40th Streets to the south and north and Fifth and Ninth Avenues to the east and west.

FCBID officials contend that the neighborhood hasn’t enjoyed the level of economic growth seen by many other areas of Manhattan over the past decade and suggest that loosening up on the zoning restrictions could help turn the area into a more vibrant and attractive community. For instance, Chelsea and TriBeCa have seen tremendous economic growth and development since the early Nineties.

Officials at UNITE and local apparel-manufacturer groups said they oppose the proposal, which they said could mean the end of the road for midtown apparel manufacturers.

Barbara Randall, executive director of the FCBID, said apparel manufacturing in midtown — and throughout the nation — has been in decline for the past few decades as a result of Federal policies and larger economic trends that are beyond its control or that of any other local powers.

Lifting the special zoning requirements would leave the buildings zoned for commercial or manufacturing uses, which could allow anything from the current makeup of sample houses, contractors, warehouses and showrooms to advertising, publishing and other industries, which had infiltrated Seventh Avenue and Broadway buildings in recent years.

The FCBID is also suggesting the city amend zoning rules on the blocks between Eighth and Ninth Avenues to allow residential uses. That, the organization contends, would be an advance toward the FCBID’s long-term goal of making the district a “24-hour neighborhood” with more restaurants, entertainment and shopping options than it currently affords.

The report also contains recommendations for the FCBID itself. It plans to begin a study of retail space in the district to see how to attract more appealing stores and to continue its work on improving security, lighting and cleanliness.

The FCBID has a large and diverse board, which includes district landlords, tenants, government officials and UNITE, as well as nonvoting members from various fashion organizations. But the real power in the organization is believed to rest with the landlords, who hold the Class A directorships.

Bruce Raynor, president of UNITE, said he opposed the proposal.

“We think it’s a bad thing,” he said. “The preservation of the garment industry in New York is critical to the preservation of thousands of jobs. Even in this economy, to give in to the needs of real estate developers over the needs of workers that are struggling at hard jobs in an industry that’s facing terrible problems from offshore competition, that’s facing a weak economy, that’s facing a harsh winter which has hit retail, and then to do something like this, is a serious policy mistake.”

Jerry Scupp, deputy director of the FCBID, said the organization didn’t want to make this move unilaterally. Rather, he said, apparel manufacturers should try to turn the proposal into an opportunity to bargain with the city to gain other types of support.

“This is the best opportunity that the manufacturers have to go to the government and say what they want,” he said.

George Kaufman, chairman of the FCBID and a district landlord, said: “We believe that a cooperative effort of the city, the property owners and the fashion industry can produce a plan which will provide benefits to all of the interested parties.”

“Once we allow them to lift the protection, it means that the Garment Center is going to disappear,” said Lai, who sits on the the FCBID board as an observer.

He noted that the proposal would be particularly painful to a city industry that has been in sharp contraction since the devastating Sept. 11 attacks that closed much of Chinatown to traffic for weeks and put about half the manufacturers there out of business.

“During the period when Chinatown was in sharp decline, many of these manufacturers did move up here to uptown,” Lai said. “Now you are telling those people to leave?”

The FCBID asserts that lifting the special zoning requirements would make it easier for landlords to rent space for apparel showrooms. Many floors on side street buildings are occupied by showrooms, and the age and condition of the buildings have made rents on the side streets cheaper than on the avenues —?a plus for small companies or those just starting out.

The report said that rents in zip code 10018 were on average 14.8 percent to 17 percent lower than in the rest of Midtown. While the entry of major corporations like Bates Worldwide into the neighborhood have raised some fears that small fashion companies could get muscled out of the district, FCBID officials and others have noted that the age and condition of many of the side street buildings limit their appeal to blue-chip tenants.

Bud Konheim, chief executive of Nicole Miller, which manufacturers half its products in New York, said the biggest danger to changing the zoning would be if showrooms could no longer afford the rents.

“That would be a bad thing, if the landlords all of a sudden start squeezing out the Garment Center and the showrooms,” he said. “That would mean the end of New York as a fashion capital.”

However, he said he didn’t believe that to be an “imminent” event. FCBID officials acknowledged that getting the special zoning lifted will be no easy feat. Zoning requests are handled by the City Planning Commission, but because of the various interest groups involved, officials said they expected to need to get Mayor Michael Bloomberg or one of his deputies involved to meet success.

They said they’ve held meetings with city officials from a few departments, including the Department of Business Services, over the past two months. City officials did not respond to requests for comment.