Designers here are on edge — about business and trade in a post-Brexit economy, the environment — and more conflict in the world.

By Samantha Conti and Natalie Theodosi on January 6, 2020

LONDON — The year is still new and full of promise, but one look at the men’s runways and it’s clear that designers here are on edge — about business and trade in a post-Brexit economy, about the environment — and the threat of more conflict around the world.

The three-day men’s showcase began 48 hours after U.S. forces killed Iranian General Qassem Soleimani in Baghdad, a surprise move that ratcheted up worries about a full-blown war in the Middle East, threats to security in the big fashion cities, rising oil prices and threats to international trade.

It’s no wonder the London collections were oozing nostalgia — for the Seventies in particular — and brimming with lavish materials, color, pattern and exaggerated proportions meant to comfort and cocoon.

Grace Wales Bonner, Astrid Andersen, Jordan Bowen and Luca Marchetto of JordanLuca were among those who looked to their family or cultural histories — or as far back as the Renaissance — for inspiration.

Giddy with Seventies nostalgia, Andersen sent out hippie fringed ponchos and reworked the rose print from her mother’s first sofa, from 1971, scattering the petals across boiler and track suits. She also crafted camouflage coats — a chubby and a long Huggy Bear style — out of patchwork fur. 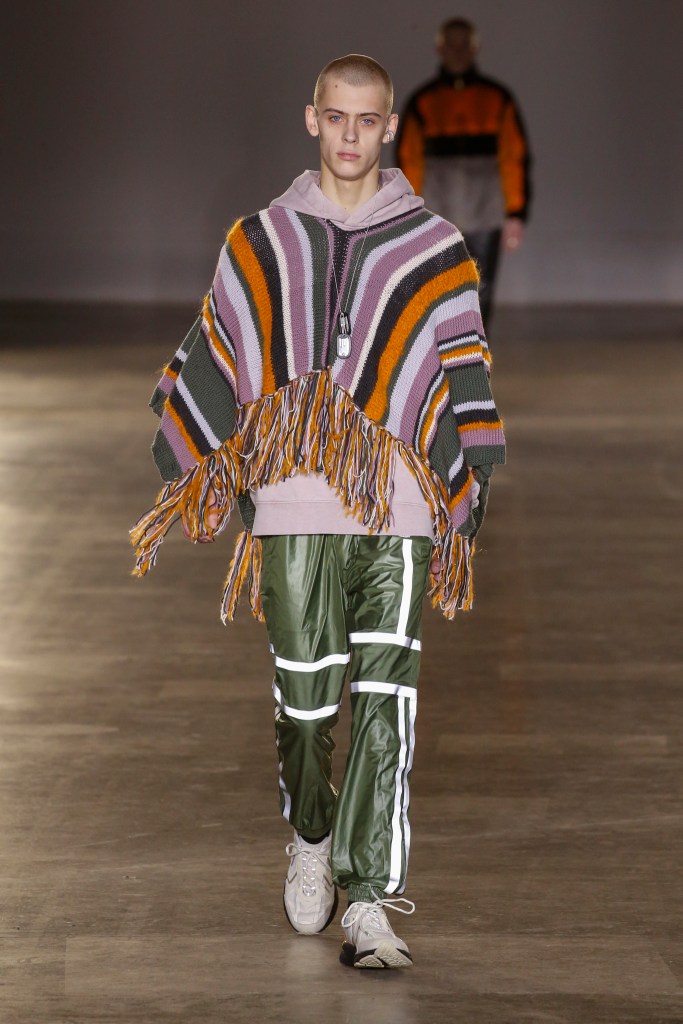 The Danish-born Andersen said she was looking to the social changes of the Seventies, the anti-war movement in Denmark, the creation of the free state of Christiania and the upbeat “Age of Aquarius energy” as inspiration in these difficult, frustrating times.

Buzzy up-and-comer Priya Ahluwalia looked back to a happier, more carefree era, drawing inspiration from “the cultural renaissance” of Sixties London, injecting a hefty dose of positivity to the London showcase with her psychedelic wave prints, bright patchwork shirts and pattern mixes.

Chinese designers were working out their own solutions, with collections that looked to the balancing forces of yin and yang.

At Xander Zhou, each model had half of his face painted a different tone and wore a single contact lens — suggesting the same person from two parallel universes merged into one. Zhou called his man “Homo Multiversalis,” a fictional creation that embodies the ultimate idea of inclusivity.

Talk about a balancing act. 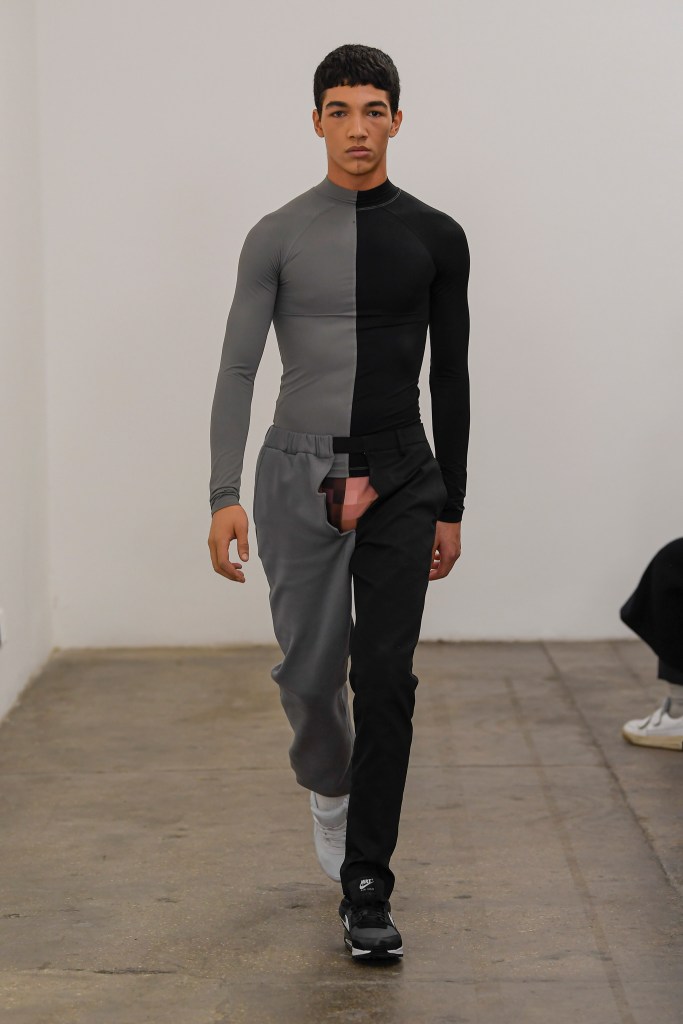 Pronounce and 8on8 were also seeing double, with the latter sending out a long, dramatic coat made from thick navy wool on one side and a shiny, black-and-copper pattern on the other.

Anxiety about the environment spurred other designers to make big, save-the-planet statements through their collections.

For Patrick Grant of E. Tautz, the battle cry was “Make Do and Mend,” echoing the World War II appeal to British citizens to reuse and recycle their clothing.

Grant, who believes consumers should buy less and treasure their old clothes season after season, sent out a collection full of patches, mended holes, and oversize proportions. He said he’s happy for his business to be smaller if it means creating less waste.

Bethany Williams, who regularly works with upcycled, recycled and organic materials, staged her show in collaboration with the Magpie Project, a charity that supports homeless women and children.

Her collection incorporated recycled bedding, blankets, bell tents — and even waste from children’s toys, such as offcuts of ribbons from rosettes. 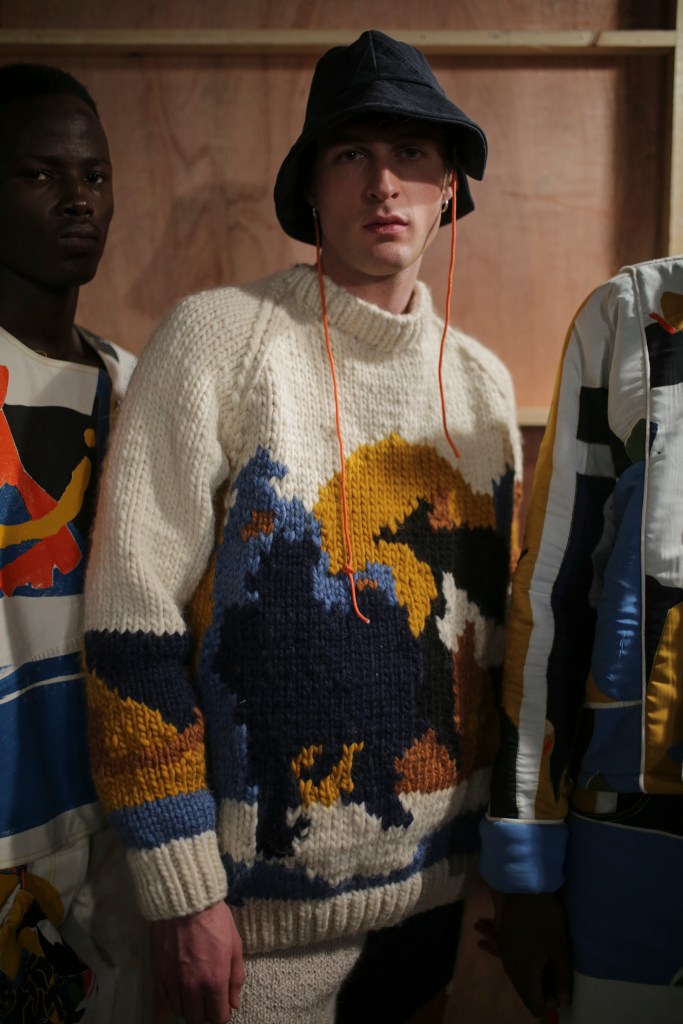 Ahluwalia and the British-Iranian designer Paria Farzaneh both worked with deadstock fabrics. When they did use new fabrics, they said they picked sustainable options. Ahluwalia used recycled jerseys and polyblends in her range, while the wave patterns on her denim were made from lasers to avoid printing or bleaching.

Another common thread among London designers this season was a deeply personal approach to design.

Martine Rose, whose heritage is Jamaican, continued to draw inspiration from her experiences as a born-and-bred Londoner, combining elements from British subcultures, or the areas in the British capital she grew up in. Community and neighborhood are so important to her that she staged her show at her daughter’s school, Torriano Primary, in north London.

Farzaneh’s show began with a traditional Iranian wedding ceremony, as she was keen on telling the story of her heritage and making a statement about gender imbalance. 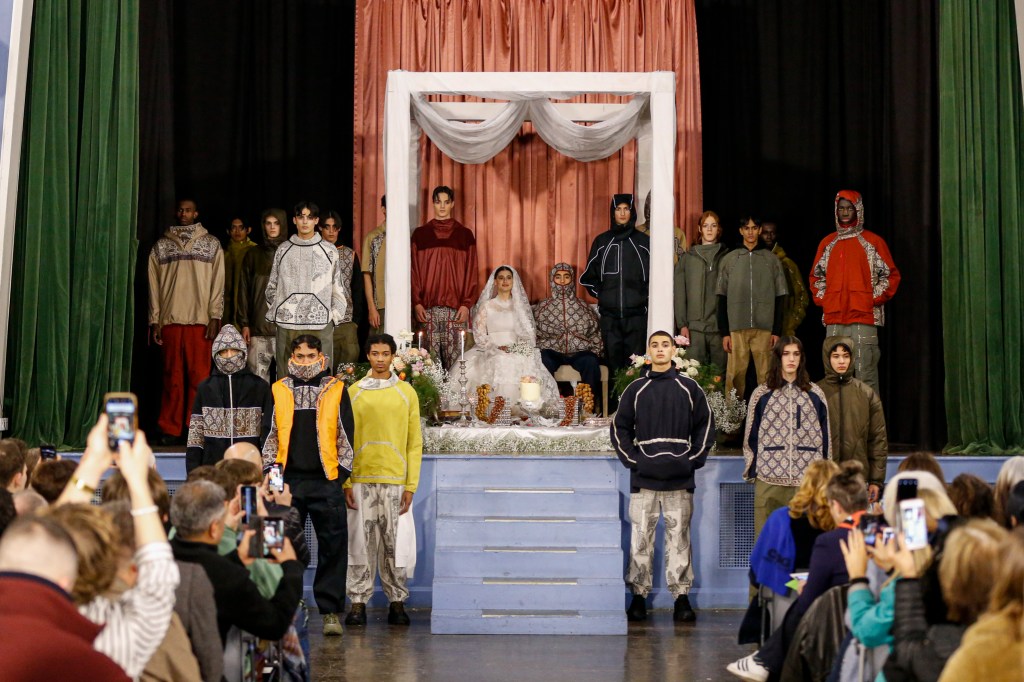 “I see myself more as a storyteller, not a designer. And this is my story,” said Farzaneh, after she showed a collection of streetwear, some of which featured prints made using a traditional Iranian woodblock technique.

As intriguing as these stories — and their political, cultural and environmental messages — might be, it’s questionable whether such deep, autobiographical narratives are necessary, or even interesting, to end consumers.

When there is exciting product to back up the narrative — as in the case of Rose or Wales Bonner — a personal story can be an added bonus. But in the case of small, not-yet-established names, the insistence on storytelling, rather than the product, can be self-indulgent, distracting — and a reason why so many British labels fail to survive more than a few years in business. 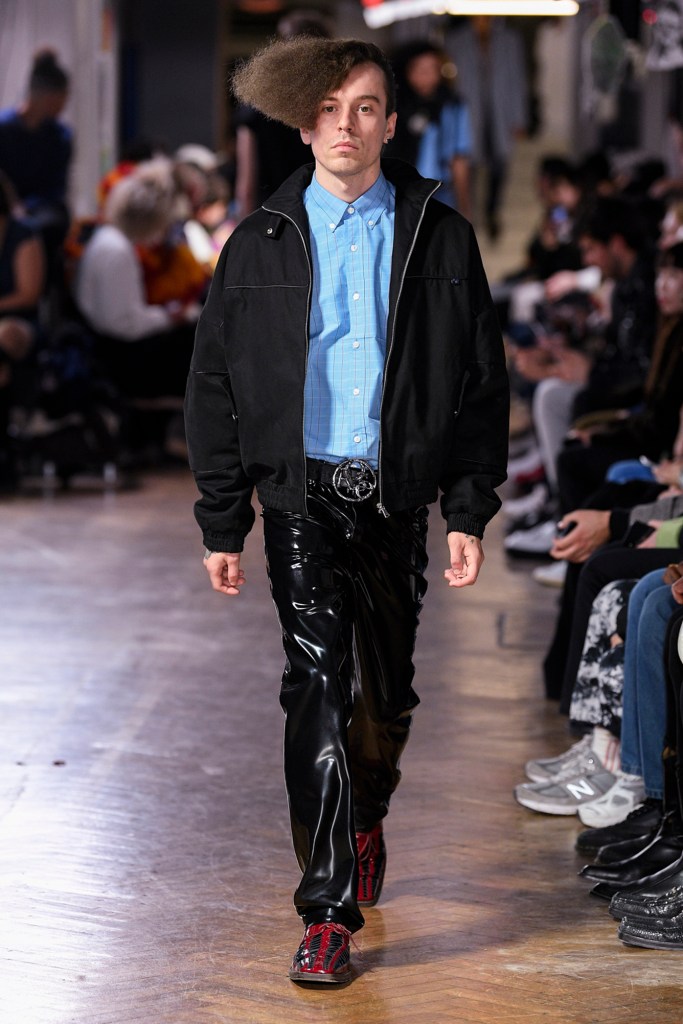