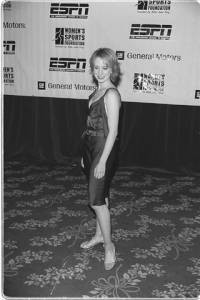 NEW YORK — Fashion and women’s sports have long had an uneasy relationship, but now the two forces are gaining a newfound respect for each other.

The growing tie between fashion and sports was evident in a variety of ways at Monday night’s Women’s Sports Foundation awards dinner at the Waldorf-Astoria. Snowboarder Kelly Clark traded in her wool beanie and oversized Burton jacket in favor of a new Prada strapless dress, a Vera Wang-clad Peggy Fleming critiqued skaters’ on-ice attire and a sleek Nadia Comaneci discussed her endorsement deal with a melba toast company.

Donna Lopiano, executive director of WSF, said: “A lot of champion athletes like Serena and Venus Williams have interest in fashion and sports. But athletes are not about to lend their names to brands without having some say in design.”

In addition to discussing their design input with apparel sponsors, athletes talked about the influx of younger, stylish performers, the desire to have more designers dress them for special events and the impact of the media’s focus on athletes’ appearances. Several credited the fashion-forward Williams sisters for ramping up the glam factor on and off the playing fields.

That was clear in the blinding sea of sequins and sheen worn by many of the 75 female athletes in the opening grand march of athletes. Save for Billie Jean King’s black sneakers, the parade was decidedly more New Year’s Eve-inspired than in previous years.

The last time billiards champ Jeanette Lee tallied her yearly apparel purchases, $18,000 was the grand total, and she hadn’t saved all her receipts. Nicknamed “The Black Widow,” and known to compete in body-hugging items, Lee managed to wrangle a black short-sleeved sweater, suede pants and ankle-length boots from Kenneth Cole for the WSF press conference earlier in the day.

“I’m very comfortable in this. I could play pool right now,” Lee said. “One of the biggest struggles we have is that we are almost condemned for being sexy. People have said I’ve taken billiards back 25 years because I’m selling sex instead of the sport.”

“People only pay attention to athletes’ appearances when they make an issue of it and wear something unusual, like Serena did [at this summer’s U.S. Open],” she said. “It’s totally personal. If you want the attention, you can get it.”

Clark got her share of second glances with her straightened hair, strapless dress and slingbacks. Prada will also outfit her for next week’s Glamour Women of the Year awards.

“I think they have cool stuff,” the 18-year-old said. “It helps me and it helps them when I get my picture taken in their clothes.”

Her sponsor, Burton, has also given her an upgrade. This year, for the first time, she will serve on the brand’s global team of riders, attending sales meetings, listening to feedback from sales reps and getting more involved with product development.

“I’m not so much into fashion as the technical aspects to improve performance,” Clark said.

Her friend, Shannon Bahrke, a silver medalist skier in moguls, envied Clark’s outfit. Bahrke said: “Our ski team is sponsored by Tommy Hilfiger, but I wish that the designers would outfit us.”

Bahrke scored the ruffled black dress with a plunging V-front she was wearing in an unconventional way. “My sponsor bought it for me for the Grammys last year,” she said.

And who might that be? Captain Morgan — the rum company, sent her shopping in New York’s hip SoHo district. As for who made the dress, Clark had to check the label. “Diane Von Furstenberg?” she shrugged.

The fine print was more important the previous night, when the pair, along with Sarah Hughes and other Gen-Yers, played phonetic Scrabble until midnight. Referring to one of the competitor’s playing style, Bahrke said: “I think she cheated,” which is quite a feat considering dictionaries are of no use. “Her father helped her,” Clark explained.

“‘Anof’ was my best word,” said Tristan Gale, the gold medalist in skeleton in Salt Lake City, and bounded away.

A few guests, like former Texas governor Ann Richards and novelist Patricia Cornwell, who was an award presenter, seemed out of place. Others questioned the choice of REM’s “It’s the End of the World As We Know It” during the medley for the athletes’ grand march. Some saw it as the elders in the crowd reaching out to the teens in the audience.

Even the evening’s emcee, Diana Nyad, addressed the generational differences. She clued in the crowd about how the night before she put on her new JLo pants and “messed up her hair as much as possible” with the hopes of gaining favor with the younger athletes over a few beers. But the state’s drinking age crimped that plan, and phonetic Scrabble ensued.

In some ways, the scenario seemed to capture the challenge athletic companies are facing, as they try to speak to a new generation of fitness fans who favor a different field of sports. During the cocktail hour, one mother dragged her three daughters for a photo op with Peggy Fleming. Once the bulb flashed, one tween asked as they walked away, “Who was that?”

“She’s using her celebrityhood to help others instead of helping herself,” Fleming said. “I’m proud she’s thinking that way at 17. A lot of people would say, ‘Oh cool, I’m a celebrity now. Let’s see what I can get.’”

Like other elite athletes in the crowd, Hughes said she had no qualms about the public’s preoccupation with athletes’ appearances.

“Of course, in my sport, they’re going to write about what I wear, especially if I wear something new,” Hughes said. “But the reason they take notice is because of what we do.”

Hughes said she bought the brown Gucci dress she was wearing, which was a sophisticated turn for a teen who wears “her lucky Peggy Fleming pajamas” the night before competitions. Hughes said she hopes to renew her year-old endorsement deal with Capezio.

Fleming praised apparel companies for getting athletes more involved with product development. She said: “It helps them adapt to the other side of the world, in dealing with the media and the sales world.”

The sport wasn’t nearly as commercialized back in the Sixties, when her mother made her Singer-sewn skating outfits.

“It was more an economical thing than anything else,” Fleming recalled. “She made all our clothes. She taught herself to sew. I’m grateful that she had good taste. She didn’t glop it up with all this costumey stuff as opposed to [what] some do today. Some of them are so over-the-top. You can’t even see their bodies.”

Fleming is considered a pioneer in changing the way people viewed female athletes. At the 1968 Olympics in Grenoble, France, her performance coincided with the first games broadcast in color on ABC, and her elegant chartreuse dress and on-ice style were both eye-stoppers. She also led the way in marketing her career, going on to star in TV specials that garnered her an Emmy Award, and continuing to perform professionally after her competitive skating ended.

Fleming was decked out in a long-sleeved, nude-colored sequined gown provided by her friend, Vera Wang. The designer sometimes gives Fleming clothes for special events and her role as a commentator on ABC Sports. As for her bamboo clutch, that she picked up at Barneys.

“Outside Barneys doesn’t count,” joked IMG agent David Baden, referring to the street vendors that camp out near the Madison Avenue store.

“It was actually inside Barneys,” said Fleming, demurely.