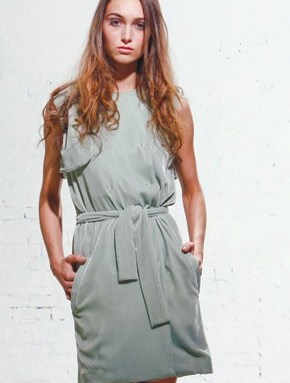 From architecture to theater, when it comes to a designer’s entrée into the industry, anything goes. Here, two more names worth a look.

Backstory: Like many designers, Julianna Bass fell in love with fashion because of her grandmother. “It’s such a cliché, but she taught me how to sew and always inspired me,” says Bass of the Fashion Institute of Technology. Then there was her mother, who “was a big vintage shopper before that was popular.” But there’s someone else to whom Bass is probably the most indebted: Barbie. Her grandmother had a 50-plus collection of dolls, and Bass recalls making clothes for herself based on their vintage styles. “I was fascinated,” she says.

Collection: Before enrolling at FIT, Bass studied costume design at Middle Tennessee State University, which explains her affinity for the theatrical. “I’m drawn to anything dramatic,” she says. There’s also that heavy vintage influence, courtesy of Mom and Mattel. Channeling the Fifties: a strapless cocktail gown with beaded appliqués and a sexy sheath with a giant bow in the back. In fact, it all skews polished, fancy and elegant.

Backstory: Even as a freshman at Princeton studying architecture, Christine Rhee toyed with the idea of working in fashion. And so, when she graduated in 2004, it wasn’t long before she left her job working for architect Lynn Breslin to hone her design skills with designer Mary Ping. “I didn’t love buildings enough to pursue architecture as a career,” she remarks. But that doesn’t mean she has any academic regrets. “I’ve learned to approach clothing design in a very similar way [to architecture],” she says.

Collection: It’s hard not to connect Rhee’s architectural background to the clean, streamlined attitude in her collection. A fitted shirtdress is accented with windowlike cutouts at the collarbone, and two-tone slim trousers have curved seams around the thighs and back. “I like contradictory pairings,” says Rhee. For fall, that translated to a lineup of moody velvet dresses and crepe de chine button-downs inspired by the novel “The Little Prince.” “The story is really delightful in one way and yet maudlin in another,” she explains.

Stats: Crhee wholesales from $72 to $480 and is available at Eva in New York and Standarddeviationny.com.