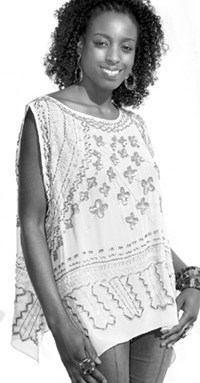 PARIS — Echoing trends seen on other European runways, spring 2004 collections shown at Paris’ latest round of apparel trade shows were awash with color and feminine details.

Although the mood at the shows was optimistic, buyers were not spending with abandon.

“We are placing orders but we are doing it very carefully, picking with prudence but ensuring the quality and design of what we chose,” Victoria Ambrosetti, owner of Vickyh Shop, a 3,300-square-foot boutique in Geneva, said at Tranoi.

With the global economic outlook cloudy, buyers were looking on the bright side by introducing color and femininity into their selections for next season.

“I’m seeing a lot of florals and a lot of softness, but the big trend of the season is color,” said Mena Farakos, buyer for five-door California chain Wilkes Bashford. “It’s like the world has come out of the kind of funk it’s been in.”

Farakos was at Atmosphere d’Ete to pick up entry-level items, such as Majestic T-shirts, which wholesale from $11.65 to $52.50, to fill out the chain’s offer of designer labels.

“Bright colors are the sure sell for next summer,” agreed Inaki Muñoz, adding that an orange trenchcoat wholesaling for $223 was among his bestsellers at the show. (Dollar figures have been converted from euros at current exchange.)

“We are seeing a lot of bright colors and feminine silhouettes,” said Debbie Dickson, partner in Claire Dickson, a 3,800-square-foot boutique in Pennsylvania, at the Tranoi fair. “[The look is] not as bohemian anymore, it has gotten very Fifties.”

In line with the retro feel, miniskirts were getting a lot of attention at the shows.

“I see feathers and miniskirts everywhere,” said Marnie Legrand, buyer for Blue Bag and GAS stores in New York, who was attending Workshop.

While proving to be more than a short-term trend, minis for next season are maximizing on length.

“Skirts seem to be right above the knee rather than mini,” said Ambrosetti.

“I think we can forget about long skirts for a long time,” said Marina Merova, art director for Lide, a 4,600-square-foot store in Moscow, who was attending Tranoi, adding that minis are not as short as last season, “but more medium length — right above the knee.”

Dresses were also out in force for next season, according to Brigitte Moody, buyer for Takashimaya in New York, who was attending Workshop.

“[Customers] get more out of one garment,” he explained, adding that beaded tops wholesaling for $233 were among the brand’s bestsellers at the show.

At the American Retro stand at Paris Sur Mode, items in fuchsia, green and white were a hit with buyers, according to Gregory Pariente, the brand’s sales manager. Multicolored printed silk pants, wholesaling at $62, were among bestsellers.

“Next season, the trend toward fantasy is very important with bright and pastel colors,” said Harinella Sbaiz, owner of the eponymous 7,500-square-foot store in Lignano, Italy. Sbaiz was attending the Atmosphere show.

“All that is light, very feminine and romantic with a modern side that isn’t too childish [is working],” agreed designer Yesim Chambrey, at Atmosphere d’Ete. “Colors work very, very well, clients aren’t buying any black — only color.”

At the stand, tulle pieces in pink and green sold well, and a baby-doll dress wholesaling for $117 was among the bestsellers.