Fendi is gunning to become a profitable $500 million fashion house and won’t pin its hopes on a hit handbag, but on a sound business strategy. 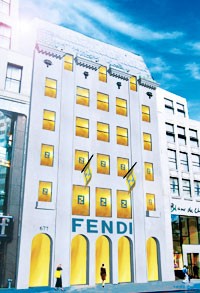 MILAN — Fendi is gunning to become a profitable $500 million fashion house —and won’t pin its hopes on a single hit handbag.

“We’re not asking ourselves every morning when we wake up, ‘How can we duplicate the Baguette?’” said Michael Burke, chief executive officer of Fendi. “It’s not an obsession.”

Instead, Fendi is hinging its fortunes on multiple categories, a stronger emphasis on directly owned retail and the fashion prowess of Karl Lagerfeld — even if the designer occasionally bites the hand that feeds him.

In an exclusive interview, his first since assuming the helm of the money-losing Roman fashion house a year ago, Burke outlined a strategy designed to double the company’s volume and achieve operating profits in the double digits within three to four years. Key elements of the plan include:

But Burke emphasized that parent LVMH Moët Hennessy Louis Vuitton, which bought Fendi at the height of the luxury acquisitions boom in 1999, is taking the long-term perspective.

“We don’t want a short-term success that next year goes down like a souffle,” Burke said, seated in a spartan conference room at the Fendi showroom here. “We want to build a really healthy business.”

Sidney Toledano, president and ceo of Christian Dior, joined Burke in the interview by conference call from Paris. In May 2003, LVMH chairman Bernard Arnault tapped Toledano to also oversee the Fendi strategy — and he said the company has been the focus of intense reorganization behind the scenes.

“We wanted to be quiet because we needed to really work,” Toledano said. “But the name is fantastic and the know-how of this company is really great.”

The vacuum created by Fendi’s silence on business strategy often has been filled by rumors and speculation of the negative sort.

Most recently, the Italian daily Corriere della Sera published an interview with Lagerfeld in which he complained about a revolving door of managers at Fendi, disorganization within the company and shortcomings in the design department.

The remarks are said to have ruffled feathers with top brass at LVMH, which owns 94 percent of the house.

Toledano and Burke declined all comment on the article and Lagerfeld’s design contract, which is believed to be good for another two seasons after today’s show.

“We’re not at the moment of contract discussions,” Toledano said.

However, when asked about Lagerfeld’s suitability to continue designing its furs and ready-to-wear, as he has for more than 35 years, Toledano replied: “He’s definitely the right one. Karl knows this house perfectly.”

He went on to assert that LVMH has a strong track record of supporting the creative process and intimated that Lagerfeld’s working conditions at Fendi would be no exception.

“We want everyone in this company to have the means to develop the best products,” Toledano said.

Burke echoed the vote of confidence for rtw and fur going forward. “It’s Karl’s [domain] and we’re sure he will give us fantastic collections,” he said.

Reached late Tuesday night as he was preparing his latest Fendi collection for the runway, Lagerfeld hinted once again at some frustration with Fendi: “Because of Mr. [Bernard] Arnault, I would like Fendi to be a success, but there are things I need [to accomplish that].”

Having delved deeply into the Fendi archives and rich history, Burke boasted how Lagerfeld was the first to take fur into the fashion realm, ripping out the linings of furs more than two decades ago and showing them with jeans. “They were so light, like chiffon or tulle,” he enthused. “Karl is an innovator. He’s just perfect for that.”

At present, leather goods represent about 70 percent of Fendi’s volume, with fur and rtw, about 20 percent, and the balance men’s wear and other minor categories.

Shoes are considered a major opportunity and Fendi recently engaged acclaimed Italian shoe designer Ernesto Esposito to beef up the category. Burke said the first full collection would be shown for fall-winter 2005-2006, but that his fingerprint would be evident on the catwalk this season. Burke said the plan is to have footwear represent at least 10 percent of overall volume.

He also spies growth potential in eyewear, citing Dior’s track record as a role model. At present, Fendi has two eyewear licensees: Marchon for the U.S. and De Rigo for the rest of the world. Come 2005, Marchon takes the global lead.

On the fragrance front, Fendi’s license is currently held by Yves Saint Laurent Beauté, part of Arnault archrival François Pinault’s luxury holdings. That license expires in 2005, and Burke vowed to move quickly to launch new products under the auspices of LVMH.

Toledano said the beauty category will bring “brand energy and momentum” to the franchise.

But distribution is perhaps the most ambitious goal, converting Fendi from a wholesale dependent company to one where a majority of revenues, at least 75 percent, stream in from a network of directly owned stores.

Today, the network counts 103 locations — with the goal of 150 stores by 2007. Key openings next year include South Coast Plaza in Costa Mesa, Calif.; Bellagio in Las Vegas; Osaka; Beijing; Seoul, and the long-shuttered flagship in Rome.

As noted, Fendi sold the lease for its Fifth Avenue flagship to Abercrombie & Fitch, and Burke disclosed that the Italian company is simply decamping across the street, to 677 Fifth Avenue between Cartier and Gucci. Slated to open in fall 2005, the unit boasts 50 feet of storefront, and will showcase Fendi’s product range over five floors and 10,000 square feet.

Burke noted the previous location was too large at 20,000 square feet and “on the wrong side of the street.”

Besides new locations, Fendi is unveiling a new “palazzo design” by architect Peter Marino that will replace its so-called “dark store” concept and an earlier incarnation based on blond wood. Burke declined to give specifics but said the first store showcasing Marino’s design would be Osaka, which features massive logos in rusted steel. He said each design would be tweaked for the location, with the New York town house featuring a more neoclassical facade with more discreet logos.

“It’s a departure from what you’ve seen to date at Fendi. All I can say is it’s very strong and very Roman,” Burke said.

The old New York store is slated to go dark in January; however, so as not to miss out on holiday sales, Fendi said it will open a temporary store on Madison and 64th street in November.

Burke also gave an update on efforts to beef up Fendi’s key subsidiaries, confirming a WWD report that Gianluca Flore, formerly at La Perla, started last week as head of the company’s U.S. operations. There are plans to appoint a new ceo for Japan later this year.

Burke and Toledano declined to target a date for breakeven, or disclose the size of current losses at the company. “The trend is strong, so we still reach the objective [of double-digit operating profitability],” Toledano said.

On the handbag front, Burke cited accelerating sales of its Sellier and Chef bags and the latest style, Vanity, is doing “exceptionally well.” Silvia Venturini Fendi continues to head up design for leather goods, sometimes in tandem with Lagerfeld.

Toledano stressed the need to diversify the range of handbags Fendi has on offer.

“The competition is such that you have to come to the market with a wide offer,” he said.