Fendi continues a 20-year tradition of having its furs on film in "Basic Instinct 2," which ceo Michael Burke calls subliminal brand-building. 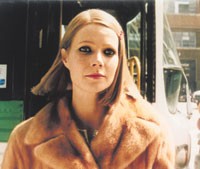 PARIS — Wearing fur in May on the Cote d’Azur? Why not, if you’re Sharon Stone and out to promote your forthcoming film, “Basic Instinct 2: Risk Addiction,” during the Cannes Film Festival.

In fact, her vintage Fendi mink bolero from the early Eighties was a sly preview of some of the styles the Roman house designed just for “Basic Instinct 2,” continuing a 20-year tradition of having its furs on film.

But Michael Burke, chief executive officer of Fendi, characterizes it as a “subliminal” brand-building effort that stretches back to the golden age of the Cinecitta studios. “This was before product placement,” he said. “They just called up houses and we shipped over a bunch of furs.”

Today, most of the furs that end up on cinema screens are designed expressly for the actress and according to the script. Still, Burke said Fendi is solicited directly from stylists or producers, and projects are chosen “when we feel the movie is in keeping with what Fendi is about.”

Besides Stone, who also wore Fendi fur in last year’s “Catwoman,” the house recently supplied costumes for Sofia Coppola’s upcoming “Marie-Antoinette,” now filming in Paris, and for Monica Bellucci in a Bertrand Blier film now in postproduction, titled “Combien tu m’aimes” or “How Much You Love Me.”

Other films that have showcased Fendi furs include “The Godfather,” “The Age of Innocence,” “Evita” and “Die Another Day,” in which more than 30 coats appeared. Meanwhile, actresses who have worn the Roman house’s handiwork onscreen include the likes of Sophia Loren, Catherine Deneuve and Jessica Lange — all strong female leads.

Burke said a starring role for fur can spark a fashion trend. For example, the tufted styles Lange wore in “Titus,” the 1999 Julie Taymor film, were Karl Lagerfeld innovations that ultimately made their way into Fendi’s lines of furs and accessories.

For the most part, however, returns are cumulative, helping to build brand awareness and credibility over time, Burke said.

In fact, Fendi recently spliced several decades of screen credits, which it currently projects onto travertine marble walls at the flagship in Rome that bowed last month. It is also featured at a concurrent exhibition of the Fendi archive that soon will travel to New York and Tokyo.

This story first appeared in the June 7, 2005 issue of WWD. Subscribe Today.

Burke said such images are even used as a training tool for new employees. “You sit someone down and have them look at 45 minutes of film clips and you get it instantly,” he said.