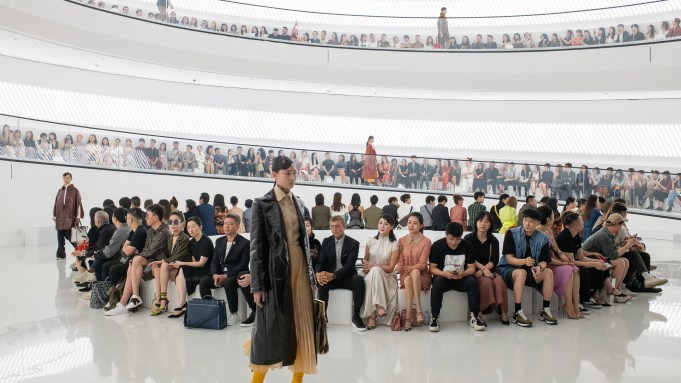 SHANGHAI — It’s been 12 years, or one full zodiac cycle, since Fendi last held a show in China. Back then in 2007, it was a show-stopping spectacle held atop the Great Wall. On Friday evening, the brand returned to the country to stage its first co-gender show, although with a very different tack.

“The location of tonight is the opposite of what we chose that time,” said creative director Silvia Venturini Fendi. She was reclining at the lounge at The Middle House a few hours prior to the event, which would reprise its fall 2019 men and women’s collections.

“Last time we brought our European spirit, which is linked to tradition and heritage,” she explained, “which is why we chose the most historical monument there is in the country. Tonight, we’re focusing on the new, and the space is out of this world to me — it’s like being in a white spaceship.”

That venue was the Powerlong Museum, where a slick futuristic winding ramp that spread over multiple floors acted as the runway, recalling the spiral interior of the Guggenheim. Actor Timmy Xu opened the show, which added 15 new looks — 10 women’s and five men’s. Although not purposefully done, the show was likely to bring to mind this year’s Chinese sci-fi smash hit film “The Wandering Earth” for many in the audience.

At least for now, Fendi is overseeing both collections herself. The late Karl Lagerfeld was not involved in the planning of the China event so the combined men’s and women’s collections accurately reflected the new creative structure. At the same time, Fendi said that the futuristic feel of the event was also perfectly Karl.

“We are celebrating him in a country that is the emblem of new to me,” Fendi said. “Not looking at the past but to the future is something we have very much learned from Karl. China, to me, is really a country which embraces the future a lot.”

While it is a favorite move for brands to mine China’s long history going back thousands of years, it seemed like the right lens to put on. Contemporary China is plenty fertile ground for inspiration. It is the country where 5G is the norm, thanks to current political lightning rod, Huawei, and where ATMs allow cash withdrawal by facial recognition software, not that people here ever really use cash. It’s a nation that has produced tech juggernauts like Alibaba, a company which makes Amazon’s ambitions look almost provincial, to DJI the undisputed leader in drone technology.

The industry has already witnessed how a vision of China steeped in problematic stereotypes and outdated clichés can lead to trouble.

There was no definitive word still on if the brand might name someone to succeed Lagerfeld. “‘Replacing Karl’ is a sentence that has no sense so let’s not talk about it,'” Brunschwig said.

Also strictly not up for discussion, Brunschwig said, was the idea of turning away from fur. The material is deeply ingrained in the history of the house and despite the growing list of brands who have forsaken it, the house is standing fast.

“We’re not taking the easy route. We have values, we express them,” Brunschwig said, noting that the fur debate is more nuanced than the usual treatment it is given in mainstream conversation.

“[Our attitude is] let’s explain to people why we believe in it and why we’re going to continue,” Brunschwig said. “Maybe in the future it will come back. I’m amused by these people who say we don’t do fur. So you do plastic? Fine. Or, in fact, they were not doing much fur anyway.”

Whichever way the wind blew on that matter, Brunschwig shared he had reason to be optimistic.

“Frankly, I think it’s a land of opportunity,” Brunschwig said of China, which is Fendi’s biggest market. “We don’t see any limit. The only limit is how much we can do…We need more artisans in Italy able to make our products, and more people in China joining the brand, bringing their enthusiasm and youth helping us to connect the brand to the Chinese people.”

With Shanghai to host two more shows from Chloé and Prada next week, both presenting new collections, it seems that is something on which the industry agrees.