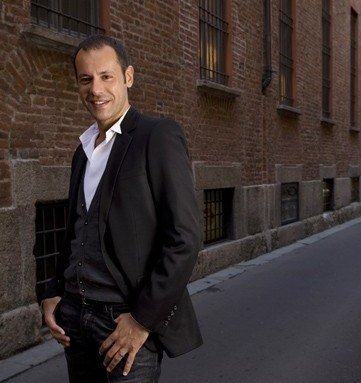 MILAN — It’s not yet 9:30 a.m. when Massimiliano Giornetti arrives at Ferragamo’s offices here, fresh from his triweekly game of tennis.

“It’s important to do something special for yourself in the morning and the evening,” the 37-year-old said, smiling. “I tend to start my day early.”

In Giornetti’s professional life, that discipline has paid off. Since his appointment as men’s wear designer at Ferragamo in June 2000, his efforts to update the collection with leaner, sharper and younger styles have helped the men’s category swell to more than 35 percent of total sales.

“Before [Giornetti’s] arrival, the men’s wear category didn’t have a clear direction. This  has changed,” Norsa said, citing marked improvement “not just with the collection itself but also the global image.” On the retail level, Ferragamo’s Fifth Avenue New York flagship recently converted a 1,000-square-foot gallery space into a tailored clothing room — what Giornetti referred to as a “men’s wear gallery” — that offers traditional services for men.

Born in Carrara, Italy, but raised in Florence, Giornetti earned a degree in foreign languages and literature at the University of Florence before taking a fashion course at that city’s Polimoda Institute of Fashion Design and Marketing. He started his career as an assistant designer of women’s haute couture for Anton Giulio Grande, a family-run knitwear label in Rome, and eventually took the creative reins. Then, nine years ago, he joined Ferragamo, where he has become known for blurring the boundaries between formal and  casualwear.

“Ferragamo started with shoes, then women’s ready-to-wear. It was an evolution, and that’s what I plan to do: evolve with the customer,” he said. “As a designer, you have to keep in mind social change. You can’t live in a golden cage.”

Hence, Giornetti has given the Ferragamo man a more sober face — casual and elegant but in tune with current economic times. Last season, he made an opulent journey through Rajasthan; for his fall collection, the designer drew inspiration from Scandinavia.

Men’s wear is about construction and materials. With that in mind, I traveled to Stockholm and Copenhagen. I find the city’s architecture intriguing. It’s extremely modern in the sense that they really link their past with their future,” Giornetti said, citing Copenhagen’s Opera House and its jet-black, plateau-like roof. “It’s perfectly integrated into the city. It’s edgy but user-friendly, and I think in men’s fashion we should have the same evolution. I started my collection from there.”

“It’s not a sad season, but a more reflective season,” he said. “There is a moral obligation, which is very important to me, of going back to Ferragamo’s artisanal tradition, where Salvatore Ferragamo began. “The collection focuses on strong solid values about heritage and tradition,” Giornetti continued. “I was very interested in working the artisanal aspects and traditional handmade methods. It’s important for big brands to preserve their artisanal tradition, which sadly is always the first to disappear.”

To that end, Giornetti’s fall collection also features handmade knitwear, contrasting piping and visible details in tailoring to underline “the origins of the tailoring craft.” This fits an economic climate in which consumers are turning away from conspicuous consumption, he said.

“This is not a moment for showing off,” said Giornetti, readjusting a bracelet on his wrist, also one of his designs. (A son of a goldsmith, Giornetti believes accessories — especially shoes — remain growth categories for the company.)

“People are paying more attention to what they buy. They are buying to make an investment, something you can wear for seasons to come. Men are more realistic that way,” he explained  later, on a tour of the Ferragamo store on Via Montenapoleone, in the heart of Milan’s Golden Triangle shopping district.

From accessories and ready-to-wear to formalwear and made-to-measure, Giornetti circled through each department, singling out bestsellers and conducting what he calls “social research” — observing consumer behavior.

“I’m interested in mixing things. I love classic, something elegant. But nonchalant fashion for me is luxury to enjoy, even if designers are proposing iconic pieces for the season.

“You can express your personality, but it’s important to be realistic with your look,” he added. “If you’re not a movie star, you should not dress like one.”