Walter Meck makes note of the church along rural Route 62 during the short drive between Fessler USA's headquarters in this quaint little village and its... 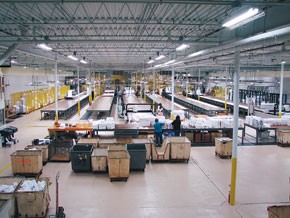 ORWIGSBURG, Pa. — Walter Meck makes note of the church along rural Route 62 during the short drive between Fessler USA’s headquarters in this quaint little village and its newest production facility.

“This church was built in 1750,” said Meck, chairman and chief executive officer of the 108-year-old fashion knitwear manufacturer. “It was burned down four times…but it’s still here.”

With the worn tombstones of his ancestors in the cemetery directly across the street, the parallels between the church and the Meck family seem fitting.

“We’re a little bit like the church,” said Meck. “Somebody tries to put you out of business, but you rebuild and you adapt and life goes on. So, we’ve adapted a number of times and a number of ways to changing market conditions. People think that there’s one formula. There’s not one formula, the formula is change.”

Meck understands that his company is the exception to the rule, a rare survivor in an otherwise-decimated American textile and apparel manufacturing landscape. Fessler and its five facilities are thriving in the foothills of Pennsylvania, a trend being driven by skyrocketing energy prices, the rise of the environmental movement and a constant demand for faster speed to market. The company is being held up as the model of how American manufacturers can compete in a global marketplace, and its latest venture provides another example of the kind of forward, innovative thinking that has kept its sewing machines humming for more than a century.

Meck is finalizing the details of a project that will outfit the roof of the company’s new 150,000-square-foot manufacturing hub with enough solar panels to power the entire facility. It’s a tall task for a building that currently houses an array of energy-intensive knitting machines and will eventually incorporate a substantial portion of the company’s sewing operations.

Making a bid to go solar is almost a necessity given the reality of rising energy prices. In addition to being able to better market the company as environmentally friendly, it will also make Fessler more efficient and competitive. Four power companies, investment bankers and politicians have been pulled in to help bring the project to life.

Meanwhile, the company has sought to lower its carbon footprint in smaller ways. Energy-efficient lightbulbs have been installed in the new building and only as much fabric as needed to fill an order is manufactured.

“The cost of energy in Pennsylvania over the next 10 years is expected to grow 50 percent,” said Meck.

Fortunately for Meck, the new facility holds the potential to be a solar success.

“We’ve got a nice big roof and it faces exactly the right direction,” he said.

Since Orwigsburg is in a valley and fairly removed from a major metropolitan area, there is little air pollution to prevent the sun’s rays from fully hitting the panels.

The environmental bent carries over into the company’s product. Brian Meck, Walter’s son and the company’s general manager, is spearheading the push into the organic apparel arena. Here again, Fessler is trying to lead, not follow, which has put Brian in the role of being an educator to many of his customers.

“I think there are still brands out there that are paralyzed because they don’t understand every aspect of organic,” said Brian.

As the environmental movement in apparel has gathered steam, it has strengthened the need for a domestic operation like Fessler.

“What we’re seeing even more now is that as part of the organic sourcing strategy, purchasing and producing those garments domestically is even more important,” said Brian.

It’s a concept that has already taken hold in the food industry, with declared “localvores” eating only foods raised within 100 miles of where they live. A designer or brand sourcing organic product from Fessler can say not only are they using organics, but that it didn’t require large amounts of fuel to be burned getting that product to the U.S. by boat or plane.

Adaptation has been the key to the company’s survival, according to Walter. His namesake grandfather, the seventh of seven sons, left the family farm to head to New York and started a sewing factory. However, approaching the turn of the century, the cost of labor in the city was growing and an early example of outsourcing resulted.

Meck Knitting Mills set up shop in Orwigsburg and began operating in 1900. The original factory is being used today. The company managed to survive two world wars and the Depression. But following the Korean War, the company was forced to sell to the Fessler family.

After a career spent in accounting and finance, Meck decided he wanted back in the family business, but he readily admits that he had no knowledge of the apparel industry. He bought back the business in 1994, just in time for the North American Free Trade Act to be implemented. Meck believes 95 percent of the U.S. businesses that were operating before NAFTA are no longer in operation.

“When we bought the company, our three largest customers were Sears, Penney’s and Macy’s,” said Meck. “Within two years, we sold nothing to those three companies. That shows you how dramatic an impact that NAFTA had, so we adapted pretty quickly.”

Meck started with the costly task of updating all the company’s knitting machines and incorporating technology to help manage the business and gain further efficiencies. Controlling its own fabric production has allowed the company to control its cost by carrying little inventory. Being able to control variables such as temperature and humidity also ensures consistent quality at the fabric level.

“We only make what we need, but we have the ability to make many different things,” said Meck.

It’s a lean operation, as well. The knitting portion of the building operates 24 hours a day, but requires only six to eight people to work a shift. The facility has more than 40 yarns from which to choose, but carries no more than a week’s worth of yarn inventory.

Meck also wasn’t looking to get the Wal-Marts and Targets of the world in as customers. Carrying inventory, often required by large mass retailers, has been wholly shunned. Instead, the focus shifted to working with smaller brands and stores that were targeting a higher end of the fashion spectrum.

Turning into a vertical operation to offer customers a full range of product development assistance was next.

“We committed ourselves to developing a state-of-the-art, world-class design services department, and that’s worked very, very well,” he said.

Young designers may not have a vision of moving to Orwigsburg following design school, but Meck bills it as a chance for them to get a grounding in the industry. Oftentimes, the designers that do make the move decide to stay.

Fessler is nothing if not a family business. The are currently 10 members of the Meck family working at Fessler, in addition to several in-laws, but Meck stresses that they are committed to lifting the reputation of what it means to be family-run. Many, like Walter, have worked in other fields before joining the company.

“Top people coming out of M.B.A. schools don’t go into the apparel business,” he said. “That’s not where the demand for top young managers is. There is a management deficit in the entire apparel industry and we’ve committed ourselves to changing the image of the apparel industry from old family-run businesses to well-run, well-managed and well-focused companies.”

The company now counts names like Nordstrom, Urban Outfitters and Lucky Brand Jeans among its list of customers, even sourcing to Urban Outfitters’ stores in the U.K. While equipped to handle those bold-faced names, the Mecks are equally adamant about presenting themselves as a resource for smaller brands and retailers. The company has an in-stock program of more than 100 undyed blank styles to help get brands started. Brian estimates that the company receives five inquiries a week and brings on 10 to 12 startups a year.

“We have to feed these new start-up brands and we want them to start with us because one out of 10 is going to grow into being a legitimate brand with some unique access or recognition in the marketplace,” said Brian.

Speed may ultimately be the principle benefit bringing brands and retailers back to the Fesslers of the world. Target time for providing first samples is two weeks, followed by one to two weeks of revisions. Once moved into production, the company’s six lean teams are capable of producing between five and seven dozen garments an hour. Those same sewers inspect, fold and label the goods.

“The speed to market and quick turn initiatives of a lot of brands and retailers has allowed us to be in a position to offer solutions to our customers to meet those initiatives,” said Brian.

Walter believes the company has found a niche that will allow it to weather the current economic storm and continue to follow the market.

“We think we’re in an end of the business that’s not going to grow dramatically, but it’s a strong end of the market,’ he said.