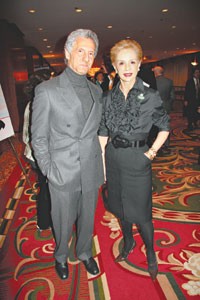 “Every year, it’s a wonderful surprise,” Margaret Hayes, president of The Fashion Group, said about this year’s crop of nominees. “The honorees are so talented and refined, and exceptionally committed to the profession, that we’re inspired to continue this.” (With a coat check, one would hope — to avoid guests scrambling to self-serve racks.)

After lunch was served at the New York Hilton, the women’s ready-to-wear award, presented by Carolina Herrera, went to Lyn Devon, and Duncan Quinn of DQ LLC picked up the honors for men’s rtw. The accessories prize went to Margret Karner of Massivesilver Inc., and Coomi Bhasin of Coomi took the honors for fine jewelry. Fraser Conlon of Amaridian was honored in the retail category, and David Ashen of D-Ash Design was lauded for home and interior design. In the beauty/fragrance category, Shirley Dong of Avon Cosmetics received the corporate award. Steven Vic­tor of Victor Cosmeceuticals was named this year’s entrepreneur.

“I am in great company, just to be around everyone and meeting the other designers,” Devon said. “I don’t get to do it too often. I am usually in my basement, working. It’s also a nice little boost for the team, since we’re working crazy hours right now.”

She added, “This is what I have always dreamed of doing. This gives me the added confidence to continue.”

Before the ceremony, keynote speaker Joseph Abboud expressed concern that the fashion industry has been too obsessed with celebrity designers, at times neglecting young designers and addressing their needs to grow in this business.

Abboud singled out perseverance as a key to success. In his early days as a designer living in London in the late Seventies, Abboud recounted being asked to interview at Chanel to design men’s wear, and planning a day trip to the famed headquarters on Rue Cambon in Paris. The day, it turned out, was so filled with obstacles that Super Mario could have been his middle name.

The engine in Abboud’s taxi blew up on the M6 motorway to Heathrow Airport, splattering the windshield with grease and oil. When he finally got to the airport, wearing a silk linen biscuit-colored suit, Abboud was told at the check-in counter that he needed a visa to fly to France and that it would take at least three days to obtain one. Undeterred, he jumped into another cab and rushed to the French embassy in central London, working his way through the drizzle to get inside — only to find out he needed a photo for the visa.

“I thought, ‘What else will the fashion gods throw my way?'” Abboud recalled. “I did make it to Paris, interviewed, and got the job. When I returned to London that night, I celebrated by having a dinner in my apartment and falling asleep in the wrinkled suit.

“When you think it is impossible, you have to keep going,” he said.