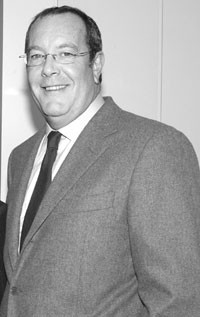 NEW YORK — There are surprises after all.

Ron Frasch has indeed landed at Saks Inc., the parent of Saks Fifth Avenue, as everyone anticipated this week. But it isn’t for the chief merchant’s job everyone expected. Instead, Frasch, the former chairman and chief executive of Bergdorf Goodman, will focus on developing Saks Fifth Avenue’s international operations and private brands, the company said Thursday.

Burt Tansky, president and ceo of Neiman Marcus Group, will be interim head of Bergdorf’s.

Reportedly, Frasch had been negotiating for the bigger job of chief merchant of Saks Fifth Avenue, a position that is currently being handled by Fred Wilson, SFA’s ceo.

However, it is believed that Frasch’s non-compete agreement with the Neiman Marcus Group, parent of Bergdorf’s, which he signed in November 2002, restricts his activities at Saks, at least for the time being. However, specific terms of the agreement would have been renegotiated by Saks, NMG and Frasch to enable him to join Saks.

The 55-year-old Frasch has a good reputation and a high profile in U.S. and European fashion circles, especially since he served in the capacity of general merchandise manager for women’s at Bergdorf’s as well. He also is considered to be a good administrator. Frasch ran Bergdorf’s from April 2000 until two weeks ago, served as president of GFT USA from July 1996 until March 2000, and president and ceo of Escada USA from February 1994 until June 1996. Prior to that, he spent 10 years at Neiman Marcus, rising to senior vice president and general merchandise manager. Before that, he was a divisional merchandise manager with Saks Fifth Avenue.

Given all that experience, it seems his new role at Saks hardly rises to the level of his skill set. On the other hand, it doesn’t preclude the possibility that one day his role at Saks will change and that he will return to the luxury markets, seated comfortably in the front rows at the designer shows in New York, Milan and Paris. That all depends on the agreement between Saks and NMG.

Saks Inc. and NMG officials declined to comment on the agreement and what restrictions Frasch may have, other than saying everybody walked away from the table satisfied. Although Frasch has yet to be given a title at Saks, officials there stressed that his new job was a real one, and not just a holding situation for a bigger job in the future, when any restrictions expire.

Frasch’s non-compete agreement specifies that for an 18-month period following the end of his employment for any reason, he can’t “associate directly or indirectly as an employee, officer, director, agent partner, stockholder, owner, representative or consultant with any competitor of Bergdorf, NMG or any of their affiliates, unless BG has approved the association. He also can’t directly or indirectly solicit anyone to stop working for NMG or induce any supplier or vendor to stop selling NMG.”

Neiman’s executives are employed “at will,” meaning without contracts, though they sign confidentiality and non-compete agreements.

“They’ve negotiated some kind of contract settlement,” a source said. “The issue is how long does he have to stay out of being a major player at Saks Fifth Avenue?”

Non-compete agreements also restrict executives from divulging “confidential information” to competitors, though in the fashion industry there are very few strategies that are kept secret for long since a lot of competitive information is shared with Wall Street, developers and vendors anyway. Even data on the performances of competing stores are often available to executives.

“Everyone knows the [NMG] game plan. It’s not like Ron has that much [information] he is taking with him. What really matters more are the nonsolicit restrictions, meaning Ron can’t take people out of the Neiman Marcus Group” to join Saks. “This is not a real job. It’s something made up to get a deal with Burt,” the source said.

Without commenting on the non-compete restrictions, James Skinner, senior vice president and chief financial officer of NMG, said Thursday, “We worked on the details with Saks in a manner that was satisfactory. Everybody is satisfied. All three parties were satisfied.”

Asked if NMG has hired a search firm to find a new ceo for Bergdorf’s and when they might find one, Skinner replied, “This is day one of his resignation. Those details haven’t been worked out. Obviously, there is a strong team at Bergdorf Goodman. We don’t feel we have to rush to find the right person.”

Saks, meanwhile, considers Frasch’s recruitment a coup and his role will contribute significantly to the development of the group. “This is a major hire for us. We feel very good about his coming into this role,” said Steve Sadove, vice chairman of Saks Inc.

Private brand revenues at Saks Fifth Avenue currently represent just 4 to 5 percent of the retailer’s $3 billion total volume and, according to Sadove, “represents a substantial opportunity for growth. I don’t know what the percentage will be, but it will be Ron’s job to evaluate and understand what the size of that opportunity should be.”

Frasch won’t be directly involved in developing private brands at the Saks Inc. department store division, where the percentage is roughly 14 percent of total volume, though Sadove said, “We are underpenetrated versus some of our larger competitors” and that Frasch will explore possible synergies between the divisions. Peggy Eskenazi, senior vice president of Saks Inc., is in charge of private brands for the department stores.

Sadove also cited “substantial growth opportunity” in opening overseas stores. The strategy was announced last fall and calls for licensed units in the Middle East and Japan and possibly elsewhere later. By not owning the units, Saks can limit its financial risks while extending the Saks Fifth Avenue name to new markets. Yet the strategy also limits its potential financial gains. Saks will not invest any capital in the overseas stores, but will receive licensing fees based on sales performances.

Currently, one licensed unit operates in Riyadh, Saudi Arabia. A second licensed store is scheduled to open in May in Dubai in the United Arab Emirates. So far, Saks plans to open a total of four stores in the United Arab Emirates, Qatar, Kuwait and Bahrain, and between five and 10 stores in major cities in Japan, beginning in 2005. Saks is also considering additional sites in Bahrain and Beirut in 2005 or 2006. South America could also be fertile ground, considering Saks has a large number of Latin customers, but there are no definite sites in mind. At one time, Saks had plans to open in Mexico City, but they were nixed after the peso was devalued in the Nineties. The Saks international organization, headed by senior vice president David Pilnick, acts as a consultant for the merchandising, marketing and the look of the store to ensure that it is in line with how Saks perceives itself.

There were no details on exactly how Frasch will help in the international effort. Frasch will be based in the New York offices of Saks Inc.

In a statement, R. Brad Martin, chairman and ceo of Saks Inc. said, “Ron will report to me and concentrate on our international opportunities and private brand development.”

Bank of America Securities analyst Dana Cohen said in a research note Thursday that Frasch “brings strong product background to the company” and adds sorely needed merchandise strength to Saks, but that his impact probably won’t be felt until fall at the earliest.

There were also no comments about whether Frasch could one day be chief merchant at Saks Fifth Avenue. However, Sadove did say, “We don’t have any search on for a chief merchant, though Fred [Wilson] is always looking for talent.”

The departure of Frasch is a loss for Bergdorf’s and its parent, but there apparently wasn’t intense effort to hang on to him.

“If Burt really wanted Ron to stay and thought he was so valuable, why didn’t he stop him from going to Saks?” asked a luxury retail source. “You don’t lose people at that level who you want to keep. Burt could have met whatever Saks is offering or could have named Ron his successor, but it looks like now Burt is shrugging his shoulders and saying, ‘Fine, I can get this job done,’” that is, without Frasch.