Inside the Fight to ‘Save’ Fashion’s Favorite Flea Market

The Brimfield Antique Flea Market, a beloved hunting ground for fashion designers like Ralph Lauren, has gotten caught up in a row of local politics that's full of comic intrigue.

Million-dollar farm fields, emu eggs, a case of cardiac arrest and allegations of conflict of interest now plague what was once an annual shopping bonanza of all things old and wonderful.

Each year, fashion designers, influencers, star interior designers and high-minded tastemakers flock to the small Massachusetts town of Brimfield, where a world-famous antique and vintage flea market can draw up to 50,000 people a week. But the show, which was founded in the early 1960s and occurs three times over the course of each summer, now appears caught up in local politics — creating a he-said-she-said atmosphere full of animosity and near-comical intrigue. At present, its fate remains unclear.

Brimfield, a town of about 4,000 residents, is too small to have a mayor or elaborate municipal infrastructure. Largely rural, it’s run by a city council called the board of selectmen, comprised of five locally elected individuals who hold public meetings and decide on important matters facing residents and businesses.

During the flea market, Brimfield’s large swaths of farmland become overrun with tents displaying centuries old treasure — an expanse of bric-a-brac, furniture, rare clothing and collectibles with a variety that is unseen elsewhere in the U.S.

“It’s one of the only places you can bring a phonograph needle and get $5,000 for it because there is someone looking for that exact thing. This is where antique dealers bring their rarest items. We get people from Europe, Japan, Thailand, Australia, New Zealand — it’s world-renowned. My main customers for years have been fashion designers,” said Eric Schultz, who oversees his family business, Brimfield Barn.

But all the curios were absent in the fallout of COVID-19, when all three of Brimfield’s 2020 flea markets were canceled. 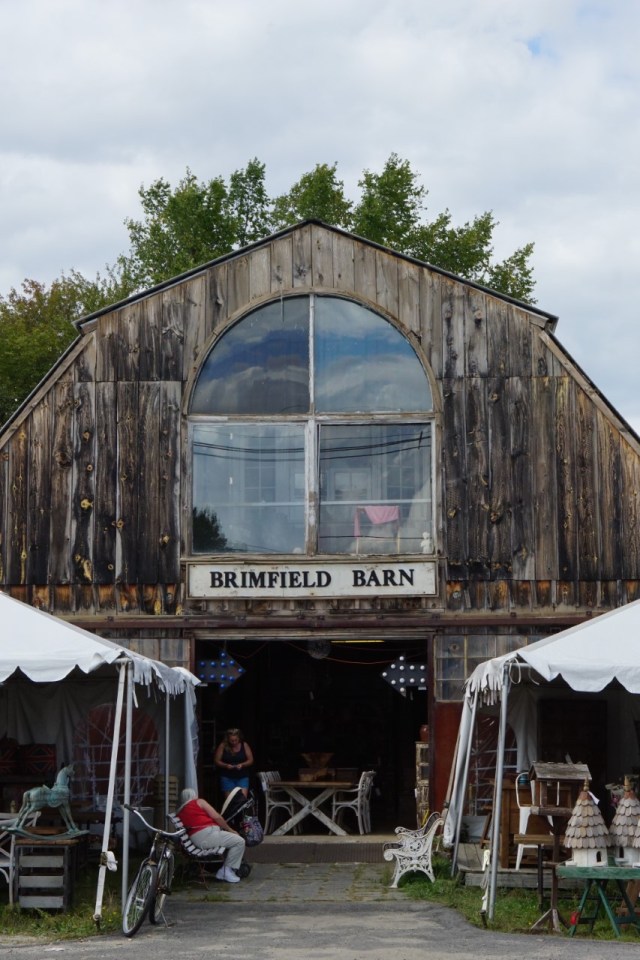 The Brimfield Barn during the annual flea market.  Courtesy of Eric Schultz

Now market operators — many of whom base their income on the event — allege that the town’s board of selectmen is taking this as a turning point to regulate the flea market ahead of its 2021 season. Some claim that new proposed laws in the town are a “thinly veiled way of getting rid of the flea market,” said Juniper Vintage owner Cara Marcoux, who exhibits at Brimfield annually.

Local leaders, however, are adamant that this is untrue and that the allegations are largely attributed to misinformation being spread on social media.

The Brimfield Antique Flea Market — frequented by designers from companies such as Ralph Lauren, Tommy Hilfiger, Bode, New Balance and Maryam Nassir Zadeh and style-inclined celebrities like Diane Keaton — is something like the Woodstock of vintage shopping. It started organically as a kind of “hippie” event, where local land owners would open their fields and let antique dealers set up, many of them camping out or hanging around well after selling hours.

But like most things these days, particularly in the secondhand market, the show has become increasingly business-like over the years. In January 2020, just before the pandemic, Klia Ververidis and her husband purchased one of these fields for $1 million — with the prospect of new business from the antique market swelling the land’s overall valuation.

It was the original sense of community that sucked Ververidis in after being a vendor at the show for 12 years. “It’s my magical happy place. I told my husband, ‘I love this place and these people are ruining it for me.’ We worked so hard to buy the field; it was our big dream to run this show and it’s just a couple rotten apples [interfering],” she said.

With tensions high from a year’s worth of lost profits, Ververidis said this is the wrong time for Brimfield’s local politicians to raise fees and infractions relating to the flea market. Earlier this year, the town’s board of selectmen began to assess bylaws that outline various fines for flea market operators and vendors who do not follow rules. Proposed infractions, such as not displaying a vendor license or subletting space within a tent, carry fines of up to $200 for repeat offenders — some even subject to having their operating licenses revoked. The severity of these punishments is being debated by officials and flea market operators.

When speaking with vintage dealers about the root of their problems, one name continues to circulate: Ryan Olszta. A young police officer by day and town selectmen by night, some say Olszta is spearheading the new bylaws that they claim will cause the show’s demise.

Some flea market operators see Olszta as a local villain, alleging he is intent on damaging the flea market and is morally and ethically compromised on a mission for power. Massachusetts state law does not allow police officers or municipal employees to sit on community boards unless the town has a population under 10,000 — a stipulation that Brimfield falls well under.

Olszta, however, said the allegations against him are wholly untrue and that he’s an “easy target.…I’m being painted as the bad cop, people don’t like the police,” he said. 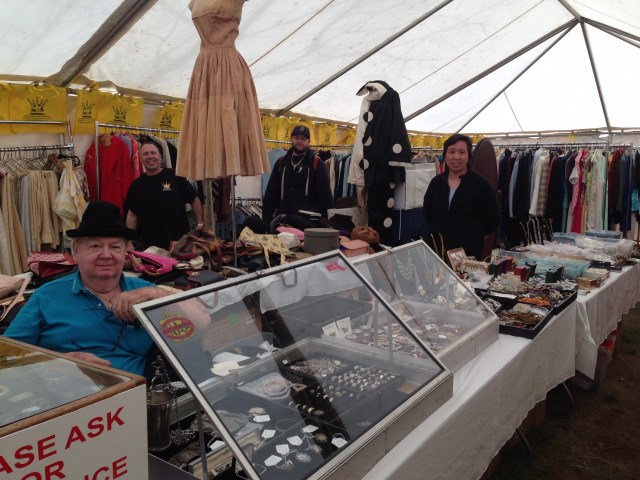 The environment at the Brimfield Antique Flea Market.  Courtesy of Klia Ververidis

“It couldn’t be further from the truth that I hate the show and want to see it shrink. They are pushing this narrative that I’m an evil, power-hungry police officer selectman that wants to destroy the show,” said Olszta, who says that he appreciates his small town is known internationally because of the flea.

Even with two jobs, Olszta still finds time to raise emus. As proof of good faith in his views on the show, he said: “I’ve come to know a lot of vendors and field owners — many are friends of mine. Every now and then the chicks that don’t hatch, I give fetal chicks and eggs that don’t develop to a couple of the oddity dealers.”

Ververidis, though, sees Olszta’s proposed bylaws as a ploy to cramp her income and way of life. “These are pretty meaty fines. I don’t think we should do this right now,” said Ververidis, who is experiencing financial distress after her field investment and a lack of flea markets for almost a year. “I’ve been hearing stories [lately at the show] of police confronting people — yelling and swearing and scaring old ladies. It seems to be increasing. I feel like a lot of people are afraid to speak up; a few show owners have been arrested,” she said of her experience at shows before the pandemic.

But for Olszta, some of the newly proposed bylaws are a matter of public safety. “Some have steeper penalties like not being within 35 feet of a roadway median. That goes back to 2017 when we had vendors that crept nearly up to the side of the road and a man went into cardiac arrest and died because responders couldn’t get through,” he said.

In mid-March, Ververidis and others started a social media campaign to “save” the Brimfield Antique Flea Market — setting off a spat between her and Olszta and further dividing townspeople over the event.

“I don’t think the town likes the show [anymore],” said Schultz, who is considering legal action against the town and Olszta. “It’s small town politics. There is a lot of money going around and I bet if you follow the trail of money you’ll see where it goes,” he added of the town’s police force, which he claims is paid extra during the flea market. (Olszta did not return a request for comment about that allegation.) 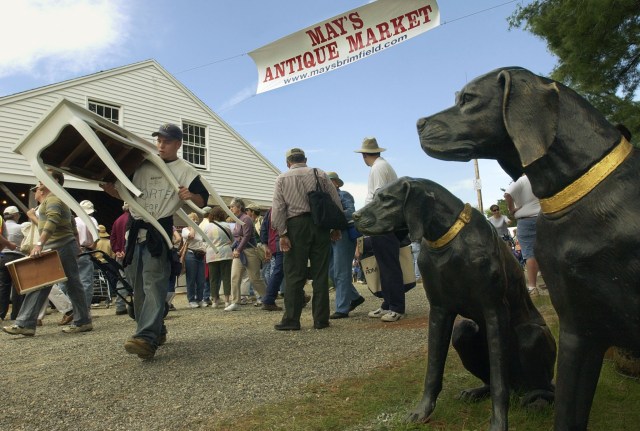 Ververidis said, “They can’t unilaterally say that the show is canceled, but they can constructively hurt it with these overly burdensome bylaws.” She feels that if vendors receive enough fines or feel that the show is overly regulated by local law enforcement, they will stop coming.

Her and other vendors’ emotions are raw, throwing salt on a wound that was already wide open before the pandemic. The advent of online thrift shopping as well as an aging antique-dealing community and steadily escalating prices for vintage had been curbing attendance at Brimfield. Some say traffic at the show is down by close to 30 percent and that prices there had grown so steep that they were more on par with shopping at a curated New York City boutique rather than a tent in the middle of a rural field.

“The show is smaller than it ever was. It’s a hard business to make a career in. We don’t want the flea to go anywhere but we struggle everyday to keep business afloat,” Marcoux said.

The show’s first event of the year is scheduled to kick off on May 11, but its fate remains unclear. The annual outdoor Tanglewood music festival in Lenox, Mass. — about an hour’s drive from Brimfield — has delayed its season until July. According to Schultz, “it’s not a good sign” of what’s in store for Brimfield.