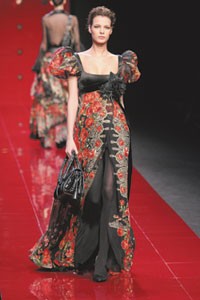 Elie Saab: He may be best known for his couture, but Elie Saab is beginning to make a case for his ready-to-wear, too. For fall, the designer found inspiration in imperial Russia, which was in sync with his taste for opulence and gussied-up glamour. Velvet jackets with ruffled cuffs and collars were paired with straight velvet skirts, while bows, flounces and embroidery accessorized the whole. Though Saab dabbled in day clothes, evening remained his forte. Mousseline gowns came with Empire waists and flowing pleats. Others were decorated with passementerie details or embroidered with pearls, and, of course, no Saab show would be complete without a few of his signature hourglass silhouettes and bustier gowns in draped chiffon.

Kenzo: Antonio Marras, the designer at Kenzo, isn’t afraid of being busy. He’s the kind who can mix stripes, florals, polkadots and wild embroidery — all on the same coat. It makes for an intriguing juxtaposition of patterns and textures, and most of the time Marras pulls it off. That said, however, the designer’s work is an acquired taste — and not for everyone. For fall, China was his reference point. A jacket with a fur hood featured plaid insets, while a flower pattern decorated knits and a cape shone with colorful Chinese-style embroidery. Silhouettes were voluminous, with an emphasis on full, pleated skirts and big coats. But there were also cropped trousers with cute short jackets, and plenty of richly embroidered jackets and dresses. Among his most elegant looks was a black Empire-waist dress with silver embroidery.

Tao Comme des Garçons: After her show, Tao Kurihara was asked about its inspiration, and she responded with a polite, I-don’t-know shrug and a girlish laugh, as if basing a collection on the pairing of “stoles and flowers” were commonplace. But sometimes it’s best to just let the clothes tell their story. The heart of this tale was a series of long stoles crafted from tiers of fabric — cotton, velvet, cashmere — some hand-dyed in lush colors, others in cream. To these, the designer added texture with lacy trimmings and raw edges. When wrapped multiple times around the models’ shoulders, the stoles were transformed into capelets. Kurihara then added flowers, made painstakingly by hand from those same frilly tidbits.

While the designer’s two previous capsule collections were tightly focused, this was her most expansive thus far. She developed her stole concept into dresses that could be flipped around and worn as shrugs, and added T-shirts and drawstring pants into the mix. She also ventured into a series of tartans and very salable black and gray pieces. Kurihara is apparently getting serious about her business. Let’s hope that the Chambre Syndicale agrees and grants the fledgling line a place on the official calendar.

Antonio Berardi: Vampish glamour was the message of Italian designer Antonio Berardi, who showed for the second time in Paris this season. A curtain parted to reveal models perched on gold stools preening themselves in front of a big mirror. Then out strutted a girl in a tight wool skirt — so tight it was almost hobbling — worn with a jacket with puffy sleeves and a lace top. Lingerie details fit for a pinup were inset into skirts, jackets and dresses, while a strong-shouldered metallic trench and hip-hugging trousers illustrated Berardi’s tailoring skills. But intricate decorations were also a focus, including a white-on-white flower pattern that embellished a skirt and pantsuit.