Filling Out the Couture Ranks

Couture week may be shrinking as rapidly as a cashmere sock in a hot wash, but a mushrooming crop of ready-to-wear designers is plugging some of the gaps. 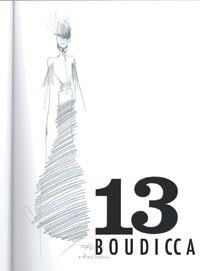 PARIS — Couture week may be shrinking as rapidly as a cashmere sock in a hot wash, but a mushrooming crop of ready-to-wear designers is plugging some of the gaps. Here, WWD looks at two of the Chambre Syndicale’s rtw guests in the run-up to their shows next week.

BOUDICCA
Stifled by rtw’s chockablock schedule, Boudicca’s Brian Kirkby and Zowie Broach see the less frenzied couture week as an opportunity to court retailers and press. The brand is known for its dramatic silhouettes, precision tailoring and experimentation with fabrics.

“Fashion has grown so rapidly over the last five years that … it’s increasingly difficult to find time to exchange your ideas with those you work with,” said Broach, adding that the duo’s penchant for hand-finishing made the hop to couture week an “obvious choice.” Broach discussed the inspirations behind the fall collection in Boudicca’s typically cryptic style. “[It’s a] series of monolithic studies. A minimalism before chaos. Confusion and clarity, chaos and purity….All expand together into the magnificent; the dream suit,” she related. The designers hope new business opportunities will follow their couture debut.

“Initially, it will bring new partnerships that will blossom … but we’re [ultimately] seeking an investor who’ll be able to … propel the business forward while retaining those elements that have established Boudicca as a label over the last 10 years,” said Broach. “How long will Boudicca stay [with couture week]?” she mused. “For as long as we’re invited.”

GUSTAVO LINS
In the run-up to couture, Parisian ateliers typically are abuzz with precious minutiae — putting the last feather on a neckline, say, or embroidering that final finger-numbing bead. But according to Paris-based Brazilian designer Gustavo Lins, who launched his brand three years ago, in the future, couture’s skills will be traced to the drawing board. “Hands like those possessed by couturiers of old are dying out,” said Lins, whose signature pieces include draped dresses honed from ceremonial kimonos, gently sculpted into knots and folds. For him, it’s all about the pattern.

“Most of my pieces are semi-industrial; once the pattern’s worked out — which can take over a week — its execution is pretty straightforward,” he said.

An architect by training, Lins views his capsule pre-collection, which is shown during couture week and can cost up to $8,000 per piece, as the “concentrated juice” of his main line that is shown during rtw.

This season, the collection, which will include a new line of women’s suits, will be presented against a tableau of patterns that Lins has molded into papier-mâché sculptures of his clothing. The event will take place Tuesday at Galerie Joyce in the Palais Royale. “I can’t bear to think of all those hours of drawing going to the garbage,” said Lins, who hopes to introduce a made-to-measure service next year.