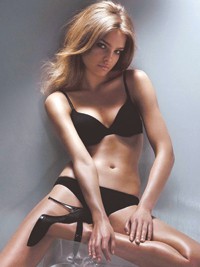 NEW YORK — Phillips-Van Heusen may be exceeding its quarterly financial projections, but it remains hot on the acquisitions hunt to maintain the momentum.

“Acquisitions are a key part of our growth. We are going to end this fiscal year with over $400 million in cash, so we are looking for appropriate growth vehicles,” said PVH chief executive officer Emanuel Chirico following the company’s annual meeting Tuesday here at the CUNY Graduate Center.

And one company that sources say PVH has its eyes on is Warnaco. Executives at PVH could not be reached for comment Tuesday, and a spokeswoman for Warnaco declined comment.

While sources said there are no indications a deal is in the offing, financial sources have been discussing how the two firms would be an ideal combination, given that Warnaco owns the Calvin Klein underwear business and has the license for Calvin Klein jeans in perpetuity, while PVH owns the rest of Calvin Klein. However, the combined businesses would give PVH a stronger foothold in the women’s business, both as a result of its Calvin Klein operation and the swimwear and intimates divisions.

PVH at one point was considered a potential buyer of Tommy Hilfiger, which eventually was sold to private equity firm Apax Partners. It was Apax that helped PVH with the financial wherewithal to acquire the Calvin Klein business three years ago. Apax, which once held 18 million shares of PVH stock, in recent months has sold off most of its stake except for one million shares that it still holds.

While he did not address the Warnaco speculation or address any brands PVH might be eyeing, Chirico said there are two criteria that any potential acquisition would have to meet. “One would be a very strong brand. It’s critical to us that it’s a brand that has great consumer recognition. We don’t really care if the business is damaged or the back office needs work. We will probably eliminate that anyway and [put it onto] our platform.”

The ceo noted the other area the company would look to is product category extensions. Of interest are lines that could be layered onto existing businesses, but with new opportunities such as a complementary retail operation or additional licensing venues.

Chirico noted there are a “number of brands that are potentially or actually for sale, or even brands that you look at for opportunities.” He said the pool of strong brands isn’t the problem, but rather the competition that’s going on currently for the same properties.

“Private equity firms are just taking it to another level and you don’t want to get involved in the auctioning process. But acquisitions, particularly our strong balance sheet and cash position, are critical and something we are very focused on.”

Tuesday’s annual meeting got under way with Bruce Klatsky, the former ceo who left his post a year ago but who remains as chairman, taking the podium. He set the casual tone of the meeting with a quick joke, describing himself as the “bad nickel that you can’t get rid of.” He went on to introduce members of Chirico’s family, seated in the audience. Of Chirico, Klatsky said: “He is exactly the kind of person that can lead the company and make it great.”

Chirico took over as PVH’s ceo in February following the dismissal of Mark Weber.

“It’s important we don’t homogenize our brands but to keep them separate and distinct,” the ceo said.

“Calvin Klein is the most recognized designer brand in the world…[with] 96 percent global brand awareness,” Chirico said. “When we acquired the brand three years ago, it did $2.8 billion. We have been able to grow the brand by 40 percent. We do that by controlling the brand image.” Last year the brand did just under $4 billion in retail sales worldwide.

Chirico explained the company controls all advertising pertaining to Calvin Klein-branded merchandise, with a dedicated in-house design studio and advertising agency having a marketing budget of over $200 million, funded primarily by licensees.

As for the Collection-tier Costa designs, Chirico said, “It’s not our biggest business, but our most important business….It sets the tone for the brand worldwide, and all other brands get their directions from the halo that comes from Collection.”

In the ceo’s discussion about Calvin Klein, he noted that products associated with Calvin Klein white label have retail sales of approximately $3.2 billion, while ck Calvin Klein has a retail volume of approximately $500 million worldwide. Warnaco’s licensed Calvin Klein Jeans division rakes in $900 million at retail, while Warnaco-owned Calvin Klein Underwear makes $600 million annually. Next year, CKI will add better women’s dresses, launch color cosmetics globally and expand into the Indian market, with plans to have many stores there over the next five years.

Fragrance, in a deal with Coty, is the largest brand in the Coty Prestige portfolio, accounting for $1.1 billion in global retail sales, and Chirico said the Euphoria launch last fall, which topped the fragrance sale rankings, was the most successful in Calvin Klein’s fragrance history.

“We’re following up the women’s launch with a men’s launch,” Chirico said, before presenting the ad for Euphoria Men, set to launch this fall.

Chirico added that over the next five to 10 years, PVH plans to grow the overall Calvin Klein business by $2 billion to $3 billion. Sportswear, he added, represents a major opportunity of growth for PVH. He pointed to Izod as a “phenomenal success story,” having bought it 10 years ago when it was in bankruptcy proceedings. At the time Izod did $30 million at wholesale, and PVH has since built it into a $300 million retail brand.

At the meeting, shareholders approved an increase of PVH’s common shares to 240 million shares.