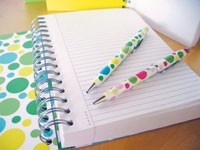 BENEFICIAL BLING: Judith Leiber is adding some of her signature sparkle to the sunshine. Leiber created a sterling silver key chain set with genuine Austrian crystals in jet, light topaz, jonquil and black diamond to benefit Project Sunshine, a nonprofit organization that provides free programs and services to children and their families affected by life-threatening illnesses and serious medical challenges. The item is available for $145 at the Leiber boutique on Madison Avenue in Manhattan.

DOT THE ‘I’S: Handbag designer Rafe Totengco is lending his whimsical aesthetic to pens for A.T. Cross. For spring, Totengco has created a limited-edition line of pens and notebooks in colorful polkadot prints. Pens retail for $60 and notebooks are $12 on Cross’ Web site. This is the first time the 159-year-old Rhode Island-based company has paired up with a fashion designer for a line of products.

Designed by Kristen Thompson and Martha O’Brien, the brand’s founding partners, the store is done in vibrant pink and gold tones. Cases along the walls and on the floor showcase Thompson’s one-of-a-kind handmade jewelry, such as sea-inspired multistrands of freshwater pearls, chokers of coral and aquamarine and turquoise and blue topaz multidrop earrings. Retail prices range from $895 to $5,000. KC Thompson also is carried at Bergdorf Goodman.

BAKELITE AT BERGDORF’S: The Kentshire counter at Bergdorf Goodman in New York has undergone a drastic overhaul. The usual displays of vintage Cartier hoops and Van Cleef & Arpels brooches have been replaced by charm bracelets dripping with cherries and brooches shaped like a frowning bulldog. The change marks Kentshire’s exhibition of vintage Bakelite, a type of coveted costume jewelry that was ubiquitous in America and abroad from the Twenties to the Fifties.

Costume jewelry designers ranging from Coco Chanel to Elsa Schiaparelli worked with Bakelite and set some of the major trends of the 20th century. Even after the midcentury war effort appropriated the supply of Bakelite for less glamorous uses, style icons such as Jackie O collected stackable bangles and kitschy pins.

Sixty years later, the jewelry is making a serious comeback. Kentshire’s collection, which was amassed from private stashes, has drawn a crowd of serious collectors.

“Bakelite and vintage costume jewelry provide immediate gratification to the customer,” said Ellen Israel, co-owner of Kentshire at Bergdorf Goodman. “It just puts a smile on your face.”

ICE FACTORY: When two of the country’s largest diamond jewelry companies team up and forge a new one, all ears in the industry perk up. M. Fabrikant & Sons Ltd. has partnered with Leer Gem Ltd. and formed Fabrikant-Leer International.

The entity is a jewelry company that aims to be one of the largest full-service suppliers in the industry. The firm intends to ensure factory-direct pricing for its consumers by way of both companies’ resources in production, merchandising and design. Fabrikant will continue to expand its private label and branded product lines as before.

GIULIANI GOES FOR GOLD: Former New York Mayor Rudolph Giuliani has been signed on to be the keynote speaker at the new JCK NYC Invitational show set for March 5-7. The show, which will be a venue for high-volume wholesalers, will be at the New York Hilton hotel.

It has been said that there is a need for a concentrated trade show for larger retailers. As the event takes place in Manhattan, Giuliani will speak on leadership, security and general business principles and philosophies in relation to the city, as well as on the burgeoning jewelry industry. Representatives from Zale Corp., Macy’s East and Sears are scheduled to attend.

ARCTIC SHADES: Original Penguin, the apparel brand popular with golfers in the Fifties, is launching its first eyewear collection, to land in stores this spring. The collection is licensed by Baumvision, based in California.

There are eight styles — three plastic and five metal — available in four different colors. Oversized acetate frames have a small gold penguin logo pattern on the temples, and metal aviators fold up compactly to fit in a shirt pocket. Retail prices for the line range from $125 to $140. It will be carried at specialty retailers such as Barneys New York, Disrespectacles and Fred Segal.

JEWELRY APPOINTMENTS: Just in time for the fine jewelry shows later this spring, Couture and VNU Expositions has promoted three executives. Nancy Robey has been named vice president of the VNU Jewelry Group, Mindy Fielman has been promoted to operations director and Lars Parker-Myers is now a couture account executive.

Robey has been with the company for 11 years and will take on an expanded role in the leadership of the JA New York Shows, which include JA New York Winter and Summer and the JA Special Delivery Show.

Fielman will oversee operational aspects of JA New York in addition to Couture and Signature Salons. Fielman and Robey will partner on all industry activities.

Parker-Myers will be the primary contact for all customer service and assistance related to Couture, the Couture Pavilion at JA New York and the Couture Diamond Leadership Conference.

The two were honored by the UJA-Federation of New York’s Diamond, Jewelry and Watch Division at its Annual Leadership Awards dinner and benefit.

Forte, president and chief executive officer of the Zale Corp., was awarded the Leadership of Excellence Award for her contributions to the organization. “It’s such a wonderful organization, and you needn’t be Jewish to participate. They help all kinds of people,” said Forte, referring to the group’s original title as the United Jewish Appeal.

Grinberg, founder and chairman of the Movado Group, received the Award for Humanitarian Excellence. Grinberg is an active member of the organization and a past division chair.

Also at the event were Regine Basha, daughter of Aaron Basha; Stacie Orloff, president of Corum, and Benny Shabtai, president of Raymond Weil.