The collection will be launched during November market and is expected to be... 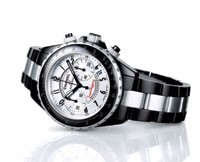 The collection will be launched during November market and is expected to be available in spring 2006 in 200 to 250 doors. The styles, true to Johnson’s whimsical and bright aesthetic, will retail from $25 to $150.

Miriam Haskell also has a license with JLo and recently inked a deal with ornament maker Christopher Radko to produce Christmas-inspired jewelry, which ships to stores in September. Haskell projects the Radko line to generate $2.5 million this year.

VELOCITY GIRL: Superleggera was an Italian automobile touring club from the Fifties that constructed ultralight car bodies for many of the most prestigious brands. Now, it is the namesake of Chanel’s new J12 Superleggera watch.

The timepiece has high-tech Swiss movements, weight-reducing aluminum details, a dual chronometer and a built-in tachometer that allows speed to be calculated in kilometers per hour.

Just as many women as men were ogling the new watch, which arrives in Chanel stores and select boutiques this October and retails for $6,100, at the June 16 party cohosted by Vitals that celebrated its launch. The party brought together 160 guests in a West Village loft in Manhattan that was no mere event space. This loft was transformed into a chic bachelor pad, with accents of black, white and gray, a full bar and, of course, a sleek motorcycle parked casually in the corner.

“As a company, we have never entered something like this before,” said Talucci. “But [Ernst & Young works] on our books and accounting, and encouraged us to go for it. It’s nice to be recognized as a viable business in the business community, even though we’re in the world of fashion.”

The Sak was the only fashion brand invited by Ernst & Young to compete for the award, and the company was chosen from among some 65 competitors. Winners, which were announced in nine other categories, including lifetime achievement and realizing business potential, will be entered in a competition for overall national Ernst & Young Entrepreneur of the Year, to be announced this fall.

This story first appeared in the June 27, 2005 issue of WWD. Subscribe Today.

PEARL GIRLS: The women of the Central Park Conservancy gathered at the Mikimoto boutique in New York on Tuesday in honor of the Tree Trust of the Women’s Committee. Present at the event were Gail Hilson, Cathy Ingram, Audrey Gruss and committee president Karen Lefrak.

Mikimoto, which featured store window displays showcasing pearl jewelry among miniature benches and a bird’s nest, announced its donation of a tree in Central Park in honor of the night’s guests. The company also introduced the Tree of Life brooch, made of gold branches and pearl leaves; 15 percent of its sales will benefit the Tree Trust.