Neil Lane may be used to accessorizing the Hollywood set with his diamond creations, but now he is going to get better acquainted with the lovely ladies of New York. 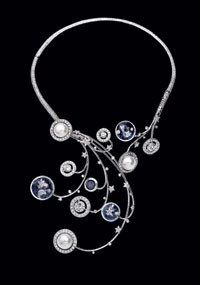 CHANGING LANES: Neil Lane may be used to accessorizing the Hollywood set with his diamond creations, but now he is going to get better acquainted with the lovely ladies of New York.

The Los Angeles jeweler, who was in Manhattan on Wednesday for an event celebrating the debut of his signature collection exclusive to Saks Fifth Avenue, sponsored by Saks and W Magazine, WWD’s sister title, said he’s had fans on both coasts, but never a good retail opportunity outside of his salon on Beverly Boulevard.

“I don’t know New York women enough yet, and this a great chance to do that,” said Lane. “But when it comes to jewelry, I suspect most women are the same. Jewelry is fun, it’s glamorous.”

The party drew an intimate crowd of 250, including comedian Sandra Bernhard and singer Ashanti, at the Saks flagship. The collection, with prices that start at $8,500, eventually will be extended to other key Saks doors.

HEAVENS ABOVE: When it comes to presenting a high jewelry collection inspired by the wonders of the cosmos, not just any showcase will do. This is why Chanel worked with fine artist Xavier Veilhan to create original artwork in which to exhibit its new Eléments Céleste one-of-a-kind jewels for its traveling Collection Privée.

9 West 57th Street tonight, following stops in Paris and Tokyo. After a private kick-off party, it will be opened to the public, free, Oct. 26-Nov. 5.

EYE TO EYE: Badgley Mischka keeps expanding its accessories assortment. The latest addition is eyewear, in collaboration with Sheila Vance of Sama Eyewear, which Mark Badgley and James Mischka viewed for the first time last month at the Sama Beverly Hills boutique.

“We tried to make sure that all the elements that make a woman feminine were represented in the frames,” said Mischka, as he carefully handled a pair with a gray pearl at the temple, then another with bows on either side printed with the rose pattern from the spring ready-to-wear collection.

Other details are as intricate and luxe, down to the flawless diamonds embellishing one style or the carefully chosen feathers laminated in the temples on another, which Vance called “the masterpiece.”

The line is scheduled for a February release, and is split between a group retailing at about $165 and another group that starts at $2,000.

But the biggest surprise is the minimalist men’s capsule collection, with wood or shiny steel temples.

“We’ve always wanted to do men’s,” Badgley said, “and with frames, the customer is a little more flexible when it comes to the brand.”

The watches, which were launched in May 2004 in Paris, feature titanium and carbon fiber cases and faces topped by a strong makalon plastic. Bands are constructed from crocodile, rubber or leather, and some of them feature checkered-flag styling.

The watches have Swiss-made movements, but B.R.M. is finalizing its own mechanism that will be made in France, Gasser noted. There also are plans to introduce precious metals in November, which will raise the prices of the watches to $70,000.They currently retail from $3,650 to $16,250.

B.R.M. has 30 accounts in Europe and is seeking 20 to 25 stores in the U.S., Gasser said. He expects to sell 500 to 1,000 watches the first year Stateside. One of the first orders came from Neiman Marcus Direct, which selected a style for its 2005 Christmas Book catalogue.