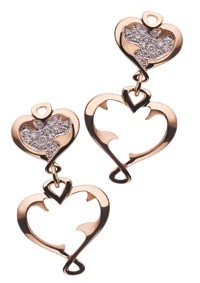 DE BEERS LV’S NEW SECRET: Designer Raphaele Canot wanted her third jewelry collection for De Beers LV to evoke the intrigue of romance, so she abstracted symbols of love, like the word forever, an infinity motif, hearts and roses and thorns, and combined them into rings, necklaces, pendants and bracelets.

“I wanted each piece to reveal its own story,” said Canot, who was in New York on Wednesday to launch the collection she titled Secrets of the Rose, which she said was influenced by the Gothic and Art Nouveau periods.

The 50 pieces in the line, many of which are one-of-a-kind, combine white and rose gold, as well as platinum, and feature white diamonds. One ring works in a .08-carat fancy intense pink diamond set beneath a 10.09-carat white diamond, creating the illusion of the white diamond having a heart. The piece is named Secrets of the Kiss and will retail for $1.2 million.

The collection rolls out exclusively at De Beers LV’s stores in New York and Beverly Hills beginning in September, with prices starting at $750.