JOHNNY DEPP DOES TIME: The normally press-shy Johnny Depp has decided to step out of character and offer his services for the Entertainment Industry Foundation’s public service campaign sponsored by Montblanc. Titled “Time is... 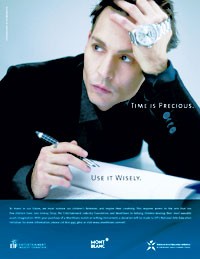 JOHNNY DEPP DOES TIME: The normally press-shy Johnny Depp has decided to step out of character and offer his services for the Entertainment Industry Foundation’s public service campaign sponsored by Montblanc. Titled “Time is Precious: Use It Wisely,” the print images are meant to raise awareness of the need for children’s art education in public schools and fund exemplary programs worldwide. Julianne Moore launched the EIF campaign this month.

For its part, Montblanc is donating a portion of watch and pen sales in its 47 boutiques in the U.S. through March to the EIF’s National Arts Education Initiative. The Richemont-owned accessories brand has a history with charitable initiatives and has worked in the past with UNICEF and the Philharmonia of the Nations, an international youth orchestra that promotes peace through music.

Depp’s images will appear in fashion and lifestyle magazines starting in November.

RUSSIAN GEMS: John Hardy is beginning to get a taste of the burgeoning Russian market. His Cinta by John Hardy collection is available at the fine jewelry store Golconda in Moscow and in December, and his main collection will be one of three brands in Golconda’s new retail venture, 1675. The store, named for the sum of the best standards of precious metals (.925 for gold and .750 for silver), will be in the 11-story Novinsky Passage shopping and business center in Moscow, approximately 10 minutes from the Kremlin. The other designers offered at 1675 will be Di Modolo and Orlando Orlandini.

TANAGRO’S RETAIL DEBUT: Tanagro is moving into town. The fine jewelry firm is set to open its first retail boutique next month on the ground level of 450 Park Avenue at 57th Street in New York. Designed by Antonio DiBenedetto, creative director of Tanagro, and JKR Architects, the store will feature a private salon, displays of anigre wood, frosted glass showcases with polished chrome accents and red leather walls. The entire Tanagro jewelry collection — which ranges from an 18-karat gold and diamond micro pavé ring, $1,500 at retail, to a diamond and sapphire platinum necklace, $250,000 at retail — will be available as well as one-of-a-kind gems.

FALCHI GOES FINE: Although designer Carlos Falchi has devoted most of his adult life to handbags, diamonds and the like have been in his blood. He was born in the Brazilian state of Minas Gerais (which translates to General Mines), where amethyst stones are so plentiful, he said, that his grandmother used to hang them on her trees to bring energy. Now, in a partnership with Brazilian jeweler Vancox, he’s created his first collection of fine jewelry, which will launch in stores this spring. The extensive line includes forward-looking 18-karat gold and alligator rings, which mimic Falchi’s penchant for natural materials, as well as a more feminine platinum ring with a white topaz set in a pavé swirl of diamonds. The brooches do double duty as embellishment on Falchi’s bags, and he’s designed a number of simple satin and skin evening clutches to go with the diamond pins. Retail prices for Carlos Falchi by Vancox are $700 to $2,500, and Falchi said the collection is aimed at jewelry boutiques as well as specialty stores like Bergdorf Goodman and Saks Fifth Avenue.