Patek Philippe, the 167-year-old Swiss watchmaker, is launching a new advertising campaign for its women's lines. 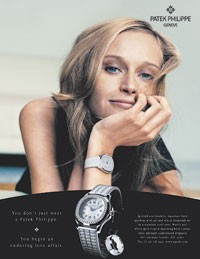 ROMANCING THE WATCH: Patek Philippe, the 167-year-old Swiss watchmaker, is launching a new advertising campaign for its women’s lines.

Created by the London-based Leagas Delaney Group and shot in color by Peter Lindbergh, the campaign features four images of female models wearing a Patek watch, like its best-selling Twenty~4 model or its Aquanat Luce and Annual Calendar that were launched last year. It also features a new tag line: “You don’t just wear a Patek Philippe. You begin an enduring love affair.”

The tag line is closely aligned with the brand’s men’s advertising, which focuses on a father-and-son generational theme and includes the slogan, “You never actually own a Patek Philippe. You merely take care of it for the next generation.”

“We wanted to make a more emotional connection with women,” said Hank Edelman, president of Patek Philippe USA. “We were on two appealing but separate tracks in speaking to men and women. It makes more sense to unite them.”

CELEBRATE GOOD TIMES: “Coming from my little village in the Philippines, this is my American dream,” said Rafe Totengco, founder and designer of the Rafe New York accessories brand, which celebrated its fifth anniversary at its Manhattan showroom Wednesday night.

A half-decade in the business means a lot to Totengco, who isn’t taking the anniversary lightly. The company is promoting its international business by opening wholesale accounts in Venezuela, Germany and Kuwait. There are also plans to open another New York retail location either in the West Village or on the Upper East Side to complement the Bleecker Street flagship.

“People are starting to look at us in a different way,” Totengco said. “It’s like we’re graduating from grade school to high school. Bag companies pop open every five minutes, but we’re ready for the next growing pains.”

THE FINISHING TOUCH: Badgley Mischka women, like the brand’s new poster girls Mary-Kate and Ashley Olsen, will now have something a little extra to keep them warm when wearing those beaded dresses and embroidered gowns.

The 17-year-old design firm headed by Mark Badgley and James Mischka rolled out a cold-weather assortment this week. The collection of about 40 looks includes hats, gloves and scarves that are divided into three groups: evening looks, fine millinery and winter clothes.

Key styles include a silk chiffon evening scarf with die-cut ponyskin paillettes and an embroidered and beaded border, an animal print beaver fur floppy hat with a velvet band and a flower crafted from feathers, a silk and wool day-into-evening scarf with Art Deco-inspired metallic beading at the ends, and long knit gloves with button detailing and lace trim.

Prices for the collection, which will retail at the Badgley Mischka store in Beverly Hills, specialty boutiques and high-end department stores beginning this August, range from $300 to $3,500. The collection is being produced under a license with August Accessories, which also creates a cold-weather collection for JLo, besides working with various private label brands.

KENZIE GETS LEGS: Young contemporary fashion brand Kenzie is stepping out with a hosiery collection in May. The line will feature socks and tights with feminine detailing and yarns like Pima cotton, cashmere, modal and microfiber.

The collection, which will be targeted to department and specialty stores in the U.S. and Canada for fall, will retail from $6.50 to $26. Kenzie is a division of Westcoast Contempo, which was just purchased by Liz Claiborne Inc. The hosiery line is being produced under license with Legale, a New York-based division of DML Marketing Group. The 15-year-old Kenzie in the past year has also launched watches, jewelry, hair accessories, cold-weather goods and handbags.