SIGNATURE VERSACE: Versace’s new Monogram accessories collection may not have flashy graphics or studs, but it will still carry that signature Versace va-va-voom. The Monogram, a new jacquard fabric embellished with the... 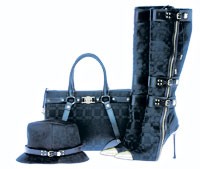 SIGNATURE VERSACE: Versace’s new Monogram accessories collection may not have flashy graphics or studs, but it will still carry that signature Versace va-va-voom. The Monogram, a new jacquard fabric embellished with the house’s iconic Medusa head and Greek fret, was introduced for fall and is in sync with the company’s strategy of streamlining its brands and product offer.

“The Medusa is a very strong, recognizable element, the visual expression of the brand,” said a company spokesman. “With the fall season, the Medusa will only appear on clothes and accessories under the signature line and no longer on other company brands,” he added. The Monogram also highlights the company’s strategy to promote its accessories business. “The Monogram has helped us boost sales of this division by 50 percent,” said the spokesman.

The collection features a range of products, from discreet blackamoor wallets to sky-high red stiletto boots with gold-capped toes. “This is not a basic collection, it’s true to Versace’s tradition and world, so there is always an element of fashion and glamour. This is a full, autonomous and continuous collection of accessories, not a mere complement to clothes,” said the spokesman. For fall, the color palette includes black, blackamoor, red and cream.

The Monogram also includes ready-to-wear items, raincoats and umbrellas. Although the company is still fine-tuning its distribution projects, it is planning to create dedicated corners in stores.

AT THE ZOO: Fine jewelers are getting inspiration from the animal world these days.

Van Cleef & Arpels has introduced its limited-edition lacquered butterfly collection. The 17-piece line was created in collaboration with Mr. Hakose’s workshop based in Wajima, Japan. The butterflies will be available at Van Cleef’s Fifth Avenue boutique through March 9. Retail prices are $11,400.

Over on Madison, Mikimoto is bringing sea horses, frogs and swans to market. Its limited-edition collection includes six animal brooches made with diamonds and sapphires, and each is centered around a baroque cultured pearl. Designs like a pair of Keishi Penguins set in 18-karat yellow gold and platinum with diamonds or a baroque white South Sea pearl crane set in platinum with diamonds and pink sapphires will retail from $17,000 to $48,000. The one-of-a-kind selection will be available at Mikimoto boutiques as well as specialty stores that carry the brand.

POOR LITTLE RICH GIRL: Marc Jacobs’ fall show evoked the feeling of looking into a dollhouse, and the jewelry he commissioned for it looks like it came straight from a young girl’s precious jewelry box — albeit, a rather wealthy young girl. The delicate selection was designed for Jacobs by Dean Harris and Osselet, and will be sold exclusively in Marc Jacobs boutiques. Harris’ work includes necklaces with small opal pendants set in rose gold and glass pendants in the shape of stars, hearts and birds. Osselet created a moonstone cabachon bracelet and necklace, a rose gold link bracelet with diamond and turquoise, and a rose gold and white pearl bangle. The oversized link necklace spun of gold yarn that appeared on the runway will also be available. Retail prices will range from $1,200 for the moonstone bracelet to $8,000 for the rose gold and pearl bangle. It’s an expensive way to salve your inner child, but the diminutive size of the pieces are an ideal antidote to the oversized brooches and bling of seasons past.

HOGAN’S HEROES: Italian luxury firm Hogan has enjoyed the support from many a Hollywood celeb — Sarah Jessica Parker, Debra Messing and Cameron Diaz, to name a few. Now the accessories brand has decided to support the actors, albeit ones a little less famous.

Starting Tuesday, visitors to Style.com will be able to go to a Web site link for the Hogan Studio Project. The site will feature audition videos of students hoping to attend the famed Lee Strasberg Institute. People can then vote for their favorite performance, and at the end of March, Hogan will award the best actor and actress with a scholarship to the school. The students will be dressed in Hogan gear, of course, and the site will also include photos of the brand’s spring collection.

BEVERLY HILLS TIME: It’s Omega’s time in the sun. The Swiss watchmaker will open its first U.S. boutique this summer in Beverly Hills. The 2,800-square-foot store will be on Rodeo Drive along with Coach and Prada, which are also expected to open outlets there in the coming months. A selection of museum pieces from Omega’s 150-year history will be showcased in the shop, as well as the current watch collection and new Bijoux jewelry line. Omega, part of the Swatch group, has been the official timekeeper for the Olympics and was the first watch worn by an astronaut on the moon.

GAULTIER PULLS THE SHADES: Jean Paul Gaultier is getting into the eyewear game. The French designer has licensed a sunwear collection to Italian firm De Rigo.

The line will be presented at the Silmo Exhibition in Paris in October with global distribution to begin in November worldwide, with the exception of the Japanese market. De Rigo also manufactures eyewear under the Givenchy, Escada and Chopard brands. The sunglasses will be available to wholesale accounts, as well as in the 15 Gaultier boutiques around the world.

SAY KORS: Leave it to Michael Kors to make over the tired old photo booth. To promote the designer’s eyewear collections, licensor Marchon Eyewear Inc. has created the Michael Kors Eyewear Photo Booth. It will have a walnut-wood veneer exterior and feature a giant Kors eyewear ad on the side. Inside, there will be a selection of Michael and Michael Kors sunglasses that customers can try on and have their pictures snapped. Kors’ voice will walk users through the process. The booth will travel to red-carpet events, department store openings and trade shows. It will be launched in March at VisionExpo East in New York. Photos are free, but the project, including design, manufacturing and travel expenses, cost more than $1 million. Marchon senior vice president of worldwide communications Robert Schienberg developed the Kors photo booth.

BUYER AWARE: The Accessories Council knows there are few things industry members like more than shopping. On March 8, the organization will hold its second Shopping Soiree event with co-hosts eyewear manufacturer Sàfilo and retailer Solstice. The event will be held at Lord & Taylor on Fifth Avenue in New York and will include a silent auction of luxury accessories, beauty and lifestyle items. Proceeds benefit the council and its endeavors.

PULLING THE CORD: Where there’s a belt business, there’s a toy business, or so must think Barry Kieselstein-Cord. The designer, best known for his belt-buckle designs and fine jewelry, has entered an agreement with licensing agency The Wildflower Group to pursue a line of fashion-forward merchandise for adults and children. On tap are licenses for collectible toys, apparel and home goods. The New-York based Wildflower Group also represents the children’s brand Tractor Tom and novelty brand iloveegg.