STONE AGE: The De Beers Millennium Star — the largest perfect pear-shaped diamond — will go on display in a major diamond and jewelry exhibition that kicks off July 8 at London’s Natural History Museum. This is the... 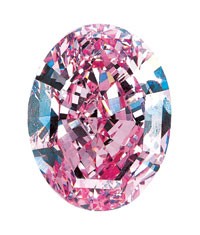 STONE AGE: The De Beers Millennium Star — the largest perfect pear-shaped diamond — will go on display in a major diamond and jewelry exhibition that kicks off July 8 at London’s Natural History Museum. This is the same megawatt diamond thieves tried to steal the last time it went on display in 2000 at London’s Millennium Dome. It will be shown alongside colored gems from around the world.

The stones to be showcased include the Steinmetz Pink, the world’s largest fancy vivid pink flawless diamond; the Ocean Dream, the world’s largest fancy deep blue-green diamond, and the Moussaieff Red, a rare example of a deep red stone. Other diamonds to go on display include the Shah Jahan table-cut diamond, the George III Garter Star and Queen Victoria’s Lesser George, the latter two on loan from the Royal Collection.

Museum director Michael Dixon said the show, sponsored by Steinmetz, a De Beers sight holder, will be a once-in-a-lifetime opportunity to see the gems. A De Beers spokeswoman said the event, which runs until Feb. 26, will be refreshed every few weeks with new diamonds or pieces of jewelry to link in with special dates, including London Fashion Week and the winter holidays.

WELL-HEELED: For a little extra money, women may now wear their sexy shoes and feel a little more comfortable in them, too. Implus Footcare’s new gel insert line, Apara, is available at DSW and Naturalizer and will soon make its way into high-end specialty department stores. The line includes inserts to protect the ball, heel and bottom of the foot. There are also liners that attach discreetly to straps to prevent blistering.

Implus promoted the new product this week with an afternoon of pedicures and manicures in Manhattan’s Rescue Spa. The event attracted some 30 guests, including model Veronica Webb, who immediately worked some inserts into her own pair of Manolos.

PATERNAL LOVE: Just in time for Father’s Day, Cartier has launched its successful Pasha watch with a wider-diameter 42-millimeter case. The case maintains a slim appearance, making it suitable for dresswear. The new model is also the first of its kind to be offered in the hard-to-work metal palladium.

PATENT PENDING: Anthony Nak is making all efforts to discourage knockoffs of its jewelry.

The Texas-based company said the U.S. Patent and Trademark Office has published two patent applications in relation to the company’s designs, which feature stones encased in metal chains or rings.

Anthony Carmargo and Nak Armstrong, owners of the company, took the measures in response to the plethora of copies in the market.

“We don’t want to hurt anyone’s business,” Armstrong said. “We just want to protect ourselves and preserve this concept that is ours.”