As part of its 150th anniversary, and timed to coincide with the opening of the world’s largest LV store on New... 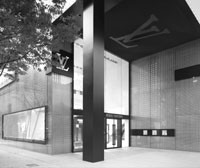 As part of its 150th anniversary, and timed to coincide with the opening of the world’s largest LV store on New York’s Fifth Avenue next month, the luxury goods house is hosting a special exhibit to display 11 LV store models by architects Jun Aoki, Kumiko Inui, Kengo Kuma, Aurelio Clementi, Philippe Barthélémy and Silvia Grino, and Eric Carlson and David McNulty. The exhibit, running Feb. 6-28, will be held at the Milk Studios and comes to New York after Tokyo and Berlin.

Why the exhibit? According to a company statement, “Louis Vuitton wanted to demonstrate its interest in architecture, which, like fashion, envelops, protects and glorifies human beings. Through architecture, Louis Vuitton also dresses up a city.”

ENGLISHWOMAN IN N.Y.: London-based accessories, homeware and fabric designer Cath Kidston has signed a lease for her first store in the U.S.

Located at 201 Mulberry Street in NoLIta, the 2,500-square-foot boutique will offer the designer’s full assortment, which includes handbags, stationery, cushions, T-shirts, bed linen and candles. It is scheduled to open in May and will be the base for Kidston’s North American wholesale operation. This will be Kidston’s fifth store and her first outside London.

PUCCI TO THE RESCUE: For those whose back won’t take another day of towering stilettos, but chunky sneakers aren’t their cup of tea, Pucci is coming to the rescue.

The Florentine fashion house has joined forces with Sabelt —an Italian footwear maker that specializes in high tech sports shoes for Formula One drivers — to create a feminine sneaker and comfortable lace-up boot. The rubber-soled shoes are available in white elk with harlequin-print nylon insets and in baby blue and aqua suede with white canvas. The sneakers retail for $400 and the boots for $550.

EUROPEAN PLANS: Lambertson Truex is looking to Europe to expand.

During a recent presentation in Milan, co-designer Richard Lambertson outlined the luxury leather goods company’s strategy. With the help of the Milan-based Winwood showroom, the company is registering a 20 percent annual growth in Europe, where it now counts 85 points of sale, including recent additions like Profil in Brussels; Candice in Saint-Tropez, France; Jofre in Barcelona, and Stockholm in Stockholm.

Distribution, Lambertson noted, should remain extremely selective. “Italians might not admit it, but they like things American,” said Lambertson. “People appreciate quality and they are responding to my working with the finest tanneries and my use of color.”

Lambertson is closely linked to Italy. In addition to his post as creative director of Gucci in the early Nineties, his accessories are produced there — bags are made in Florence and shoes in Padua, in northeastern Italy.