Some elaborated on their trademark looks quite effectively, while others -- successfully or unsuccessfully -- ranged further afield. 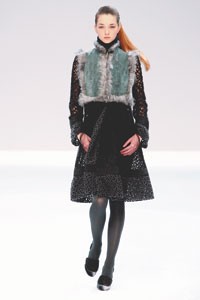 Some elaborated on their trademark looks quite effectively, while others — successfully or unsuccessfully — ranged further afield.

Akris: After a few seasons of seeing Albert Kriemler’s Akris shows, you realize that he possesses the elegant reliability of a Swiss timepiece. It’s certain that you’ll find beautifully wrapped chocolates on your seat, and you’re guaranteed to see luxurious, well-crafted clothes that politely avoid making a ruckus. Still, Kriemler’s steadfastness doesn’t suggest that he’s designing on auto-pilot. In fact, his show notes indicated an important change in attitude, citing bold volumes and textures — at least as bold as Kriemler will go within his tight parameters of wearability.

In a somber, wintry palette of mostly black, white, brown and gray, he worked volume subtly into sleeves that belled lightly at the cuffs of cocoon coats and belted jackets. Slim, straight pants and skirts kept proportions balanced. His play on textures, too, was served up similarly understated in a mix of tactile materials: mohair, tonal wool jacquard, velvet and suede. Kriemler occasionally veered off into tricky territory in his use of the cravat as a recurring dress motif and in drapey jersey gowns that felt a touch outdated. Nonetheless, they didn’t detract too much from a collection brimming with the sort of clothes that make Akris a hit with luxury retailers and, most important, their clients.

Sonia Rykiel: At the end of Sonia Rykiel’s show — for the designer’s traditional bow — a French song listed all the tricks a love-experienced woman could do, and the runway flooded with models in sexy, transparent black lace skirts, tops and dresses. There was no reluctance to flaunt the merchandise, and Rykiel’s still as feisty and flirty as ever. Apparently, that’s the point: She’s not going to change a winning formula. For fall, the designer’s banking on several signatures: knitwear, voluminous furs and cute ruffled dresses. Sweaterdresses came with a bow at the waist or at the collar, while high-banded trousers emphasized the waist and dresses slouched off the shoulder. Black predominated, with tones of pink and bronze and a cute floral print on a pink velvet dress. Showgirl-style feathers abounded, while chiffon confections came flounced and twisted into flower-like flourishes. Not much of a surprise — but toujours Rykiel.

Martin Margiela: Note to recyclers: Martin Margiela is your man. Of course, that’s not news to the secretive Belgian’s fans, who love the way he takes the throwaways (from bottle caps to whatever) and transforms them into his signature conceptual clothes. There’s a message hidden in his approach: something along the lines that, if one looks closely, there’s beauty everywhere, or maybe it’s a line against fashion’s excess. No matter. Margiela turned in an excellent fall collection, which, despite its abstraction, offered clothes that looked good. His premise? Transforming used seat cushions and car seats into dresses, coats, skirts and tops. It could have been an irritating gimmick. But Margiela pulled it off by keeping his creations clean and in flattering silhouettes. His other idea: clothes that looked dusted with dirt or that appeared to be faded by the sun, as if they’d been neglected too long in a store window. Granted, wearing these numbers may get your straitlaced friends snickering, and you could expect a few lint brushes for your birthday. But rounding out the effort were impeccable pleated skirts, a pair of nice pants and handsome blazers, grounding Margiela’s wacky world in a bit of commercial reality.

Haider Ackermann: Gentle femininity ran through Haider Ackermann’s sumptuously somber collection for fall. While the designer joined the ever-growing Goth gang, his version of the theme came with a romantic edge. He eschewed too-obvious black in favor of a palette of dusty blues, olive green, burgundy and prune — a beautiful mix. His sensuous Bedouins channeled chic tranquility: A woven fur and suede jacket had an edgy elegance, while a wool shawl draped beautifully over the shoulder was paired with billowing pleated trousers. A flowing knee-length dress in blue and a sweeping pleated skirt matched with a tank and voluminous sweater in three shades of green added romance. But a handful of more avant-garde confections, including leather-like latex pants worn under wool shorts, may prove difficult for everyday wear.

Jasmine Di Milo: One would expect a girl from a privileged upbringing to appreciate lush refinement. Add to the equation the fact that she’s the daughter of Mohamed Al Fayed, known for his own opulent tastes, and you’d think at least a bit of that influence would rub off. But Jasmine Al Fayed proved she’s not a typical daddy’s girl — even if she picked her father’s hotel, the Ritz, to stage the first show for her Jasmine Di Milo brand. Al Fayed’s tastes lean more to the Gothic — think lace insets and coats with dramatic pointy collars — and sexy, almost to the point of sluttish. At least that was the impression communicated by a little lace lingerie ensemble with garters and the plethora of supershort, flimsy dresses, ultratight trousers and bustier confections. Maybe a poor little rich girl wants to look like a hooker. (Would they even let a girl wearing one of those dresses into the Ritz?) But more important, the clothes were amateurish and generally unflattering. If Al Fayed wants to play on Paris turf, she’s going to have to pull a lot more talent out of her hat.