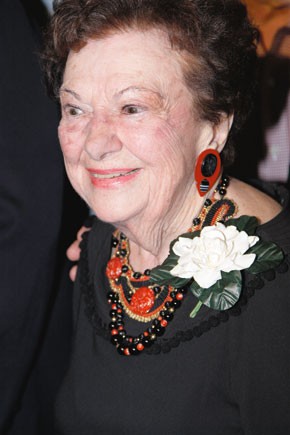 NEW YORK — It was Ruth Finley’s night at the High School of Fashion Industries on Wednesday, and Nicole Miller, Arnold Scaasi, Michael Kors and Carolina Herrera were among those who celebrated her career.

Finley, founder and publisher of the Fashion Calendar, was honored at the school’s annual fashion show and fund-raiser.

“I’ve known Ruth for 52 years — I was four years old when I met her,” Scaasi joked just before taking the school auditorium’s stage with Miller to introduce Finley, who started the biweekly listing of fashion industry events in 1941. Scaasi and Miller presented Finley with her crystal trophy — a lifetime achievement award. “Just what she needs — another chatchki,” Scaasi quipped.

“I am not getting ready to retire, I’m too young to retire,” said Finley, 88, accepting her award dressed in a black Nicole Miller dress. “And as Al Pacino said in ‘Scent of a Woman,’ ‘I’m just getting started.'”

Before the festivities, Stan Herman compared Finley with the finest old watch whose movements are perfectly in sync. “She keeps perfect time and perfect placement with everybody,” he said.

Jeffrey Banks noted that Finley does not play favorites. “She has always treated every designer equally,” he said. “Even when I started in the industry in 1976, I never felt lower or less than any other designer. Ruth treats everyone the same whether they are Calvin Klein or a young designer just out of FIT.”

Herman and Banks, along with Peter Som, Parker Ladd, Fern Mallis, Patricia Underwood, Mary Ann Restivo, Steven Kolb and Audrey Smaltz helped celebrate Finley’s commitment to the fashion industry. “If you think she is a pistol now, she was a machine gun then — rat a tat, tat,” Scaasi told the crowd.

In video tributes, Kors, Herrera and Yeohlee Teng also praised her. “She is a very gentle lady but at the same time a very strong lady,” Herrera said.

“When I was an aspiring young designer and clueless about the fashion industry, someone said, ‘Just call Ruth Finley,’ and she was the answer,” Teng added.

Kors recalled that when he began his career, “I called Ruth and I said, ‘I want a show on Monday at 10 a.m. She laughed and said ‘Who doesn’t?'”

The evening also marked the start of the Ruth Finley Endowment Fund, which will help needy and deserving High School of Fashion Industries students further their education.

Finley came up with the idea for the Fashion Calendar when she was fresh out of college and heard a few family friends who worked in fashion complain about how their hectic schedules had them traipsing all over town. As steadfast as she is about her responsibilities at the Fashion Calendar, Finley’s loyalty extends to charities such as City Meals on Wheels, and she has helped to raise more than $1.2 million for the organization.