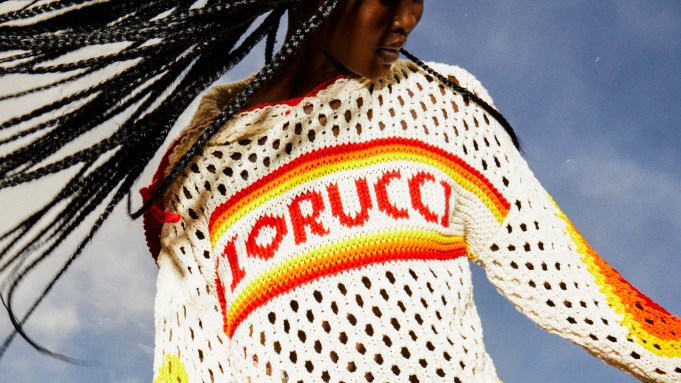 “It’s so nice to bring the angels back to the City of Angels,” said Fiorucci designer Daniel Fletcher, reflecting on what it means to have the brand back in L.A., with a pop-up shop at Fred Segal through the end of April debuting the new “Desert Oasis” spring collection.

The installation is timed to the Coachella Valley Music & Festival, which runs the weekends of April 15 to 17 and 22 to 24 in Indio, Calif. Fletcher shot the spring look book in Joshua Tree, and the brand will be dressing some of the festival attendees.

Fletcher joined the storied Fiorucci brand in December 2019, shortly after competing on the Netflix fashion competition show “Next in Fashion.”

He spent the pandemic months focusing on jersey-driven T-shirts and sweats with the signature cherub motif “because that’s what everyone was buying at the time,” said the designer, who studied at Central Saint Martins in London. “It feels like now we’ve finally been able to expand the collection — there’s dresses and shirts and loads of party things because Fiorucci is a party brand.”

Fletcher’s first experience with the popular ’80s label was seeing Fiorucci artwork in his fashion school library. “It was always on my mood boards, and when they brought it back in 2017, I was really excited to see what they were going to do….They did a really good job bringing back the sweats and Ts, and then they brought me in to inject that fashion element back into it.

“People love it because of the history but we want to plan for the future, too,” he said describing the rich Fiorucci archives, which include everything from matchbooks from the L.A. store, to jeans that Keith Haring painted. “It’s incredible…but I want in another 50 years’ time for people to say, ‘look what they did in 2022.’ This collection has a lot of those ’70s pieces and anything-goes, going-out attitude, but also a love of the earth, which was very important to Elio.”

Fletcher said he was inspired for spring by a hand-painted sign from the archives that reads “Love Earth & Nature.” “The archive is full of artwork dedicated to the planet and Elio’s passion for protecting it,” he said.

The Fiorucci brand was founded by Elio Fiorucci in Milan in 1967 with an emphasis on curve-hugging, Lycra stretch denim (some call Fiorucci the inventor of skinny jeans) and T-shirts with whimsical graphics. His empire quickly went global, when Fiorucci stores — some of the original lifestyle emporiums — opened in New York, London and L.A..

The New York boutique, which opened in 1976, was not only a store but a hangout and pop-culture crossroads, where Andy Warhol stopped in daily for an espresso because he thought the coffee bar was the best in town, said Fletcher.

In the early 1980s, Fiorucci’s art director was Maripol, the architect of Madonna’s image in the “Like A Virgin” days. Oliviero Toscani, who shot many of the era’s groundbreaking Benetton ads, also shot for Fiorucci.

Veteran British clothing retailers Stephen and Janie Schaffer acquired Fiorucci from Edwin Jeans in 2015. Edwin, a division of Itochu, had owned the Italian brand since 1990. New investors have come on board recently from Naga Brands Group.

Fiorucci has been wholesaling to Revolve, Kith and others in the U.S., but the Fred Segal pop-up is the first direct concession it has had. The brand opened a London flagship on Brewer Street in 2017, offering customization services, vintage wares and more.

Fiorucci has big plans for 2023, including a collaboration with White Mountaineering and a return to Milan with a new retail store.