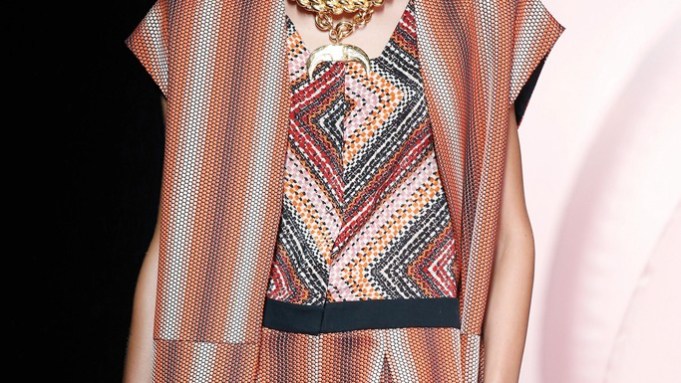 The third edition of Momad Metropolis, which ran in tandem with Mercedes-Benz Fashion Week Madrid and Intergift, drew 23,948 visitors, up 13.5 percent over the February edition. Ten percent were foreigners with major buying groups from Portugal, France, Italy, Mexico, Russia and the Czech Republic, according to figures released by IFEMA, the fair’s organizer.

Held Sept. 12 to 14 in four halls of the Madrid fairgrounds, Momad’s product mix featured midmarket apparel, footwear and accessories representing upward of 1,800 brands with “every fashion-related item made in Spain under one roof,” commented Luis Eduardo Cortés, IFEMA’s executive president. The strongest categories were summer dresses and separates; floor-length and special-occasion clothes; a little swimwear; novelty knits in lightweight yarns, and shoes, handbags and children’s wear. In general, there was lace, loads of it, and prints ranging from soft pastels to splashy bold designs.

Vendors and retailers praised the event’s tighter logistical layout and contemporary product offering. Business, they said, is looking up. Domestic stores are better off, according to Alberto Rodríguez, general manager of Vilagallo, an upscale Madrid-based apparel producer. “Clients are buying more because there is less fear. Our retail sales are up 25 percent over this time last year,” he said, adding online sales are enjoying a growth rate of 120 percent.

For spring, the brand featured a range of dresses for a mature customer aged 30 to 50 in pink, orange, lime green ottoman, Neoprene blends and jacquards with embroidered trims and wholesale prices of $40 to $78. “We’re changing our design concept to make it more contemporary and less risky in order to accommodate worldwide potential and we’ve moved our export department to London, which is our second market after Spain and where we have 150 points of sale,” Rodriguez said. In the pipeline for next year are retail openings in the U.S. and Mexico, he added.

“The fair is interesting and it’s a way of explaining who we are,” said Carolina Gomez de Zamora, codirector of Gant Lifestyle España, a second-time exhibitor. “We wanted to participate again because it is slowly being turned around.

“The frontier of different sectors is washing away,” she added. “You can get customers [at the fair] who cross that frontier and you never know where the next one is coming from.  Momad is still pretty local. The midterm plan is to make it more international but for the moment, it’s practical and workable where customers and vendors can make real contact.”

“We’re quite happy with the fair; there is more life here than at the Paris show,” said a commercial spokesman for Derhy, a contemporary apparel manufacturer based in Paris.  With its range of dresses, separates and knitwear, the label was doing well, she said, with a punched Neoprene line, printed lace dresses with cutouts and a grouping of younger styles in embroidered organza priced from $53 to $71 wholesale.

Veteran e-tailer Laura Schumacher, shopping for her Alicante, Spain-based Espadrillesetc.com Web site, said, “I spent much more money than I had planned or budgeted for and because of what I saw, I changed the strategy of my site. I am very pleased with this show.”

Meanwhile, at the 60th edition of Madrid Fashion Week, which ran Sept. 11 to 16, first-time participant Alvarno, by co-creative directors Arnaud Maillard and Alvaro Castejón, swept L’Oréal’s award for the six-day event’s best collection.  Maillard called the stylish, high-spirited runway presentation that lasted a mere seven minutes “a flash of energy,” with more models on the runway at one time than Madrid Fashion Week is used to seeing.

The duo sent out shapely, feminine silhouettes including dresses, skirts, versions of the classic white shirt, pants and shorts with a stronger shoulder, asymmetric cuts, lace, geometrics and signature embroidery.  Black and fuchsia predominated along with orange, the “now” color, in a suede biker jacket for example, combined with blue.  Zippers, one of the label’s mainstay details, turned up on lightweight coats that convert to jackets.

In addition to Alvarno, Maillard and Castejón helm the design team for Azzaro, the Paris-based couture house.

Spain’s third-largest apparel producer (after Inditex and Mango), Desigual started fashion week with a message one couldn’t miss — psychedelic graphics, T-shirts, tops and shorts with sheer overlays and a big grouping of “happy” summer frocks and sundresses. It was the first time a global brand (and a Barcelona one at that) has taken to the Madrid runway. The collection — women’s only — was not what Desigual showed at New York Fashion Week, confirmed the firm’s chief executive officer Manel Jadraque. New York, he said, “was more sophisticated.”

Roberto Verino referenced pre-Colombian art and Aztec colors in his collection, called “Mexico Connection.” The veteran designer from northern Spain has a big business there, including 13 shops-in-shop in the Liverpool department store chain. A roomy, fringed poncho in raffia with high-waisted shorts opened the show, followed by a pair of slick dresses in earthy khaki and beige, tailored double-breasted jackets with matching shorts, and long floral caftans. For night, he went with an all-black series including micro shorts in sheer fabrics, feathers and frou aplenty.

Roberto Etxeberría took a pretty gutsy stand with “Pura Piel” — a leather-only collection for next year’s warmer climes.  He offered a slew of slim zip-front shifts and separates in brown, black, russet, gray and red; a cowhide vest effect, and him-her Bermuda shorts. The Barcelona-based Etxeberría was fresh from his debut at New York Fashion Week, where he showed men’s only.

Catalan designer Teresa Helbig had in mind “a barefoot Jane Birkin and the social-animal sophistication of Loulou de la Falaise,” she said. Her detailed collection featured girlish dresses and shorts — both are her strong points — in natural raffia, cotton, embroidered tulle and lace and white/gold combinations with delicate pleating, hand-sewn sequins and glitter.  There were blazers, printed nubuck separates in blushy pink, sling-back clogs and floor-length gowns with a vintage feel.  Helbig’s business is based on made-to-measure with customers from the U.S., Mexico, Great Britain and Russia.

Ana Locking’s metaphorical ode to chaos and recuperation was based on Thomas Mann’s novel “The Magic Mountain” and it bristled with her unique brand of jaunty separates and casual sport chic. Heads were bandaged and silhouettes targeted ingenue dresses in embroidered tulle and a style that looked like an open-back hospital frock along with a baseball jacket and sheer blouses and Ts with flounced skirts. There were eclectic fabric mixes like Neoprene and chiffon, and lots of white and black-and-white combinations, red and a sky blue-turquoise-tangerine print.