By Katya Foreman and Susan Stone on April 3, 2009
View Slideshow 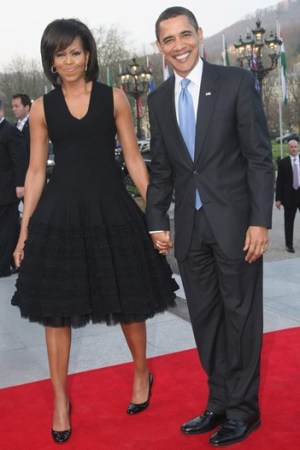 Since moving into the White House, Michelle Obama has been loyal to young American designers but during her trip overseas, she surprised some by adding several new European labels to her wardrobe, including Paris-based designer Azzedine Alaïa, and Italy’s Moschino, Etro and Gunex.

On Friday night, Michelle Obama attended a spouses dinner marking the kickoff of the 60th anniversary NATO summit in Baden-Baden, Germany dressed in a sleeveless, full-skirted black dress with a frothy tulle underlay by Azzedine Alaïa. The move drew comparisons to Jacqueline Kennedy, who on a state visit to France in 1961 opted daringly to wear a gown by French designer Hubert de Givenchy.

Obama’s Alaia theme resurfaced in France the next day during a NATO spouses trip to Strasbourg’s Gothic Notre-Dame Cathedral, for which she wore an Etro print top, Moschino white shirt and Gunex black pants, with a tailored Alaïa jacket. Bruni-Sarkozy, who is said to have gracefully assumed the role of translator for Obama, wore a pretty lilac Dior coat over a black top and pants. During the visit, Obama gave Bruni-Sarkozy an acoustic Gibson guitar as a gift.

Late Saturday, Obama wore a Narciso Rodriguez black dress with an Alaïa cardigan as she stepped off the plane in Prague. On Sunday, she paired a white oversize-bow Moschino shirt with a black Michael Kors pencil skirt and Alaïa cardigan while accompanying President Obama for an outdoor speech.

Bunte, Germany’s glossy celebrity and society magazine, debated on its Web site whether the U.S. First Lady was making a faux pas by attending some of the weekend’s events with bare arms, but concluded: “We think she can pull it off!”

Obama’s wardrobe choices in France garnered nods of approval from the local press, which lauded her independent sense of style.

“A very good choice, more original, which merits the prize for the day’s fashion match,” declared the French magazine Voici, under the headline: “Carla Bruni-Sarkozy, Michelle Obama: The Fashion Match of the Ladies in Black.”

While blogs were abuzz tracking the fashion moves by the First Wives during the summit events, coverage from the French press remained reserved. With a series of violent demonstrations from antiwar and anticapitalist protesters erupting across Strasbourg, the leftist French daily Libération chose an image of a hooded demonstrator dropping his pants for its weekend cover shot.

Le Figaro was the only French newspaper to select a photo of the Obamas and the Sarkozys for the front page of its weekend edition, allocating a brief sidebar inside to coverage of the first ladies’ first meeting earlier in the day, for a tête-à-tête lunch at Strasbourg’s Rohan Palace.

Tracking the ladies’ “two-day wardrobe marathon,” claws were out in the U.K. at the Guardian. “Despite the matching pussybow, compared to Michelle, Carla actually looks a bit washed out and [we can’t believe we’re about to say this] prim and proper. A flash of colour or a fashionable statement accessory could have taken this outfit to another level — but that’s just not Carla’s style,” the paper said.

The Sunday Times declared the “poise, grace and style” of Michelle Obama “probably provoked more interest and discussion than the final summit communique. Its headline screamed “Hugger-in-chief grabs the glory.”

The Observer was in Obama’s corner, too. “This time last year, we were all Carla Bruni-bonkers, but how very 2008 she seems now, all bendable-poseable in her Gallic couture,” the paper said. “Suddenly, it’s touchy-feely smart-casual Michelle [‘come here, big hug!’] Obama who couldn’t be more fashionable.”

Meanwhile, the Web site of Germany’s Der Spiegel declared “Lucky Strasbourg! The whole world is watching this Alsatian city to finally see the summit meeting between First Ladies Michelle Obama and Carla Bruni….The question remains — which of the two is the most elegant?”

The Paris Match Web site carried a photo of a smiling Barack Obama and Bruni-Sarkozy, under the headline: “Welcome Mister Obama.”

Michelin two-star chef Emile Jung, who runs Strasbourg’s celebrated Au Crocodile eatery, is said to have rustled up the lunch for the ladies, which was described as French with an Alsatian twist.