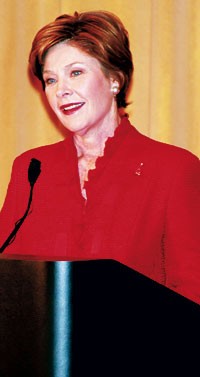 NEW YORK — Not ones to miss a beat, First Lady Laura Bush and Sarah Ferguson, the Duchess of York, pledged their allegiance against heart disease Friday morning.

Addressing a roomful of red-clad supporters, the duo headlined a press conference at the Time-Life Building plugging The Heart Truth, a national awareness campaign about heart disease. A curtain-raiser to Friday’s Heart Truth fashion show in Bryant Park at 2 p.m., the event also kicked off a new partnership to reach women in African-American and Hispanic communities.

The First Lady said she wants all women to know that heart disease is the leading killer among women, since education and prevention can save lives. Many in the crowd — save for the guy in the ruby-sequined tie — wore head-to-toe red in honor of Friday’s National Wear Red Day. The First Lady noted how airwomen in Iraq were wearing Red Dress pins to show their support.

“I’m so glad so many of you wore red. We know nothing attracts attention like a red dress,” she said, clad in a red ruffled suit. “I am so glad to be here in America’s fashion capital as we unveil the Red Dress campaign.”

Bush thanked the many fashion designers who whipped up the dresses worn Friday afternoon by 25 celebrities, including Ferguson, in the Heart Truth fashion show, where the First Lady watched from the front row with Fern Mallis, Carolina Herrera, Oscar de la Renta and Katie Couric, who cheered on the models with waves, nods and the occasional thumbs-up sign. The crowd shared her enthusiasm, greeting Christie Brinkley, Paula Abdul, Sheryl Crow, Carly Patterson and the 74-year-old Carmen Dell’Orefice with thunderous applause. No one seemed fazed that some of the dresses were closer to pink or coral than red. Even Bush opted later to change into a two-year-old burgundy velvet jacket from Carolina Herrera with a satin skirt.

Zac Posen, Vera Wang, Carmen Marc Valvo, Kenneth Cole and Narciso Rodriguez were among the 25 designers who provided dresses for the models.

The event started on a more sober note, with a video about heart disease. In the First Lady’s speech earlier in the day, she warned that 90 percent of women under the age of 50 have at least one risk factor they can control whether it be smoking, overeating or not getting enough exercise. Walking is Bush’s favorite form of exercise and something she loves to do on the trails of Camp David and at her ranch in Crawford, Tex.

Despite that, she is well aware of the daily struggle some women face. “But if my mother-in-law Barbara Bush can swim 88 laps at a time, the rest of us can surely exercise for 30 minutes,” she said.

“I used to resolve to lose weight every New Year’s. Now my resolution is to get and stay healthy. That’s not as easy as it sounds, when you have a pastry chef whose idea of a light dessert is four layers of chocolate instead of six,” Bush said.

Ferguson was equally candid, describing herself as “a closet American” and admitting she was “utterly terrified to walk down the runway.”

She praised Bush for epitomizing the role of First Lady, and said her royal daughters Beatrice and Eugenie look at the Bush twins Barbara and Jenna as role models. “I think that’s rather sweet,” Ferguson said.

Afterward, Ferguson said her preshow jitters were mounting. “I’m suddenly realizing how frightening it’s going to be to go down that runway. The first thing I’m going to say is I’m going not as a model, but as a regular human being,” she said. “When you see yourself as a fat lady, it’s hard to imagine yourself as a slim one. It’s important. I think a lot of people can relate to that.”

She said she went with a Ralph Lauren dress because she wanted to look “very American” Friday. “I think he does symbolize America. I feel good in his clothes and they fit well for a women of my size,” she said. “I admire what he’s achieved, and how he’s built the business to the size he has.”

On a more personal note, the duchess said she wanted to thank Lauren for being such an admirer of her mother, Susan Barrantes, who died four years ago. “He thought she had tremendous style. She lived in Argentina and rode horses. She was a very good-looking woman and stylish. I think he would have liked to photograph her. She had a very easy style.”

The duchess elaborated on her earlier remarks about how her daughters look to the Bush daughters as role models.

“It’s very difficult for any young people to be on the public stage and to have a normal life. They have to put up with the press, intrusions and security. They have very few colleagues who have the same security systems and problems with the press. In Britain, the press is ferocious,” she said. “It’s nice for my daughters to see the Bush girls. They can see, ‘This is now, and this is later on.’”

Ferguson noted the rarity of having two relatively young sisters leading such public lives. “My girls will always have it because they’re princesses. But I certainly think my girls would live freer lives here.”

But as a British citizen, she has no plans to uproot her teenage daughters, she said.

Senator Majority Leader Bill Frist’s wife Karyn said, “I’m embarrassed to say I didn’t realize that heart disease is the number-one killer among women. If I’m not aware, and I’ve been living with a cardiac surgeon for 35 years…”

Dressed in a four-year-old Carmen Marc Valvo red bouclé dress and coat, Frist said, “I hope he doesn’t cringe when I meet him.”

Ferguson, on the other hand, was faintly disappointed with her daytime attire. Unbuttoning her Dolce & Gabbana coat to offer a peek of a low-cut, embellished dress, she said, “It’s a pity I can’t take off my coat to show you my dress. It’s the latest from Dolce & Gabbana. But I’m staying buttoned-up today.”