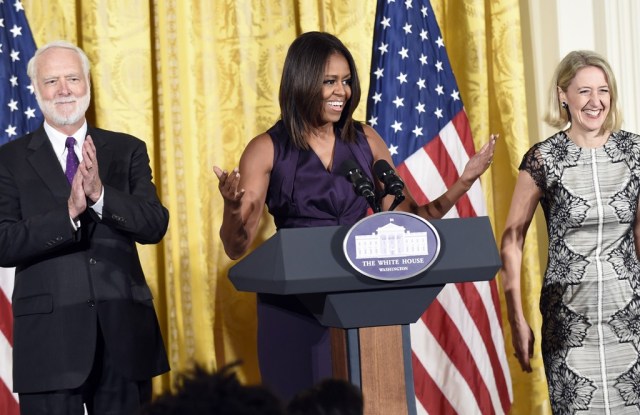 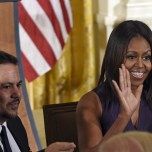 WASHINGTON — First Lady Michelle Obama said Tuesday that women everywhere should feel fortunate that Narciso Rodriguez went into the fashion design field instead of becoming a lawyer, doctor or dentist.

Obama, wearing a deep-purple Rodriguez dress, honored the designer and several other design visionaries at a White House luncheon for the recipients of the Smithsonian’s Cooper Hewitt National Design Awards.

This story first appeared in the October 1, 2014 issue of WWD. Subscribe Today.

“What I discover is that these men and women are some of the most daring and creative minds in the world, from a designer at Google who’s using data and crowdsourcing to create art that will take your breath away, to the former Hollywood set designers who are now creating some of the most unique buildings and interiors that you’ll ever see,” she said. “And then there’s this fashion designer whose parents tried to convince him to be a lawyer, or a doctor, or a dentist, or something like that.

“And I’m sure that I speak for all women when I say that I’m grateful that Narciso chose another path,” Obama said to loud applause.

“It is certainly a career highlight for me,” Rodriguez said of the award in an interview after the luncheon. “To be recognized along with all of these great designers and to meet them and speak about what they do is really something so memorable and so beautiful.”

He confirmed what the First Lady said about his parents, noting that they were initially “less than thrilled” about his career choice. But fashion was something Rodriguez said he was “very serious about early on.

“When I meet with students or people interested in a career of fashion, I always tell them if this is something serious that you want to do, you never take ‘no’ for an answer,” he said.

As for Obama’s sense of style and support of the industry and designers, Rodriguez said, “Certainly at a time when the economy was tough, she showed women you can look fashionable and not necessarily have to wear all designer labels and mix in very affordable things. She always looks flawless and champions mixing different types of clothing, affordable clothing with designer labels. She has really impressed everyone with her personal style. She is impressive because she is consistently consistent.”

In her sixth year as honorary patron of the NDAs, Obama is stepping up her support of fashion this year. Long a champion of American fashion designers, Obama will host the first Fashion Education Workshop on Oct. 8 at the White House, which will bring together high school and university students, fashion designers, magazine editors and “fashion technologists” for a five-hour event that will include workshops, a luncheon featuring the First Lady and a panel discussion.

The Cooper Hewitt is celebrating the 15th anniversary of the NDA program, which promotes the importance of design in all aspects of life and features public education programs, special events, panel discussions and workshops. National Design Week, Oct. 4 to 12, is sponsored by Target Corp.