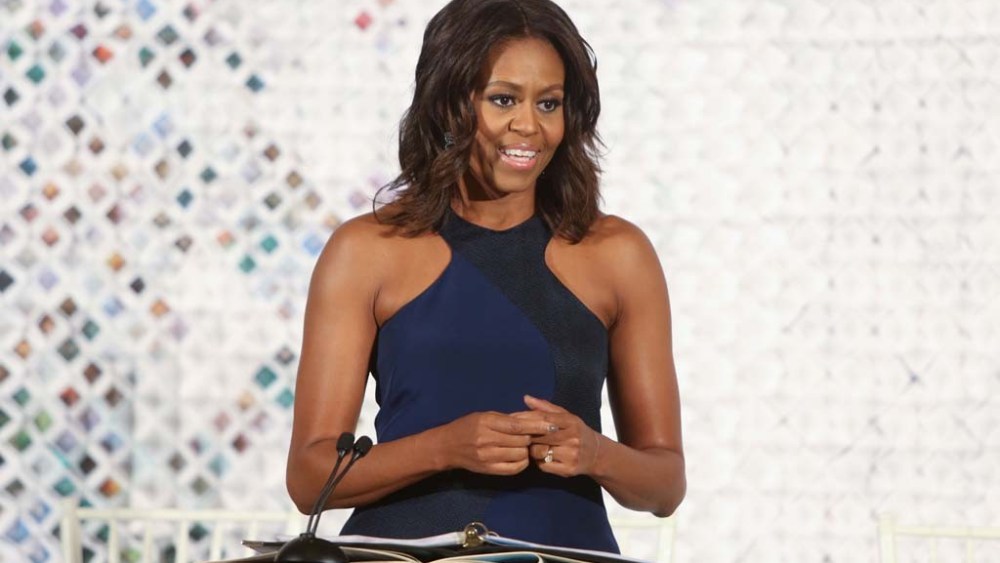 Operation Fashion, if you will, featured workshops, a panel, networking sessions and a working lunch (a rough reality, no doubt, for the newbies). Narciso Rodriguez, Thom Browne, Reed Krakoff, Prabal Gurung, Diane von Furstenberg, Jimmy Choo’s Sandra Choi, Opening Ceremony’s Humberto Leon and Carol Lim, Jenna Lyons, Lela Rose and Zac Posen were among the fashion set who advised the budding designers and “technologists.” The First Lady was introduced by Anna Wintour, artistic director of Condé Nast and editor in chief of Vogue, who’s an Obama-ite anyway, given all the millions she raised for President Obama’s reelection campaign.

Wearing a racerback cobalt dress designed by Fashion Institute of Technology student Natalya Koval, who won a design competition as part of the event, and Jimmy Choo shoes, Obama noted that $350 billion worth of apparel and footwear is sold in the U.S. annually and 1.4 million people work in retail and fashion. Repeatedly stressing that success requires hard work, she cited how Spanx founder Sara Blakely now runs a multibillion dollar company with distribution in 50-plus countries. The Chilean-born designer Maria Cornejo, another attendee, also was singled out for her success.

“Fashion is about so much more than just a pretty pair of pumps or the perfect hemline. For so many people across the country, it is a calling, it is a career, and it’s a way they feed their families,” cheered Obama who, up until Thursday, had generally steered clear of mingling with the fashion world apart from wearing designer clothes and attending election fund-raising events with them. “So that’s why we thought it was important to bring the industry to the White House, and to share it with all of you who are coming up in the next generation,” she added.

Wednesday’s workshops were meant to show students all aspects of the industry. Obama told students about the trials and tribulations many designers face. Blakely, for example, worked at Disney World after graduating from college, “buckling people into their seats for the ride,” the First Lady said. She followed that up with a job selling fax machines to an office supply company, while working for two years developing and researching her own design ideas. Investing her entire savings of $5,000 into her designs, Blakely started to shop them around and was repeatedly turned down until a manager at a factory gave her a chance. Fast-forward to Spanx’s global reach — which clearly stretches to the White House as the First Lady exclaimed, “We all wear them…with pride.”

Wintour talked about some of the barriers to fashion that she had to knock down when she first came to the U.S. as well as her first job in America, at New York magazine. “It used to be that I would come down here to D.C. and felt that I represented an industry that was decidedly unserious. I was the woman from New York in the funny clothes who kept insisting that fashion mattered,” Wintour said.

Obama encouraged the students to talk to the designers, who all participated in some of the five fashion workshops during the day and were seated at 20 tables in the East Room for the First Lady’s remarks.

Rodriguez was the catalyst in connecting Team FLOTUS with Parsons the New School for Design, according to an executive familiar with the negotiating. After the designer suggested Parsons executive dean Joel Towers get in touch with the First Lady’s office, Towers put together a packet of photographs of Obama wearing various designer clothes that were created by Parsons alumni and referenced the school’s history of designing installations for the International Contemporary Furniture Fair and other special events using re-salvaged goods. Once a plan was in motion, Parsons recruited 16 undergraduate and graduate students who specialize in architecture, interior design and lighting, all of whom signed nondisclosure agreements. A visit to the nonprofit Made for the Arts reaped five shopping carts full of discarded books, all of which were careful to be about neutral subjects so as not to be offensive in any way, per order of the First Lady’s advisers.

Later, in need of hundreds of additional books, Parsons faculty, who had read about how publishers sometimes discard books they have printed too many copies of, appealed to Princeton Architectural Press. The company provided 400 books, which meant students were literally reading about architecture as they folded pages from the books for the backdrop, pillars, centerpieces, mantelpieces and other East Room adornments. Rizzoli also donated some books. Before tackling the sizeable quick-turn, students watched a documentary about origami called “Between the Folds.”

The futuristic backdrop made from 4,000 folded book pages and transparent podium were specifically designed to complement Obama’s dress by Koval. Another dress designed for the First Lady by FIT student Chelsea Chen was displayed on stage during the panel discussion. The up-and-comer was at the event, as was her mentor Phillip Lim. The First Lady accidentally attributed the dress she was wearing to Chen initially and then quickly credited Koval.

Before returning to the White House Wednesday night for the Celebration of Design cocktail party, Lyons said she was inspired by how the First Lady told the students they “can do anything and be anything” they want to be. Obama also reminded them not to squander this once-in-a-lifetime opportunity, which resonated with the crowd. “Afterwards a lot of kids came up and wanted to take selfies. But then they realized, ‘Wait, this is my chance to say hi. I don’t think they would have done that if she had told them to,” Lyons said. “She was warm but also very on-point. You can tell she is a good mother.”

The White House’s East Corridor was lined with mannequins showcasing some of the many designer dresses Obama has worn over the years — a few of which were accessorized with origami pieces made by the Parsons team. After loading up a 16-foot truck with their creations Monday, the students BoltBus-ed it to The Beltway on Tuesday morning to install their work. While their every move required an escort, the Parsons team got a backstage view of the White House, so to speak, that included brainstorming with the in-house florist, the occasional water break in the butler’s pantry and an impromptu stop in the First Lady’s second-floor office above the State Room for a snack of apples — “the only food that an aide could find,” according to Alison Mears, dean of the School of Design Strategies. With only two weeks to complete the project, Mears was helped by Jonsara Ruth, director, MFA Interior Design, and stylist Helen Quinn.

After Obama’s remarks Wednesday, von Furstenberg, Gurung, Lyons, Jason Wu, Tracy Reese and Lafayette 148’s Edward Wilkerson shared some career advice on a panel hosted by “Today” show contributor Lilliana Vazquez. Lyons described wearing sweatpants for her first day as a Donna Karan intern, which was blissfully spent cleaning the closet designated for archives, and von Furstenberg recalled how her 28-year-old self was invited to a Gerald Ford-hosted White House dinner shortly after her revolutionary Newsweek cover. While the years that followed weren’t always heaven and roses, von Furstenberg told the students later, “Hard work is always fun if you like what you do. And your most infuriating moments will wind up being the best sources and the best stories when you’re famous.”

Afterwards, Obama reminded the students to network for internships with the fashion crowd — looking people in the eye and speaking clearly. “Just don’t just sit here, eat the lunch, take a nap and go to the next workshop. Think about how you’re going to turn this into the next thing that you do….If you’re not going to do anything with it then give it to somebody else, but don’t waste it, OK?” she said. “This is really special so make the most of it. It won’t be the last door that you have access to, but this door is really different. You have to think when is going to be the next time I’m going to be invited to the White House because I think about that all the time. I tell my kids, ‘Take a look around now. We may never get invited back here again.’”