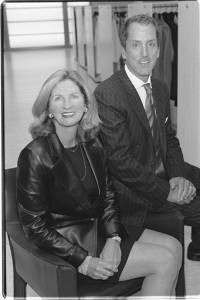 NEW YORK — “This exhibit transfers us back to another time, a time of opulence and a certain decorum,” said Joyce Brown, president of the Fashion Institute of Technology, referring to the Museum at FIT’s latest exhibit, “Femme Fatale: Fashion and Visual Culture in Fin-de-Siècle Paris.”

The exhibit, which runs through Jan. 25, was sponsored by La Mode de France, a French organization that supports and promotes French fashion throughout the world.

Valerie Steele, acting director and chief curator, said the exhibit shows “how the sexualization of fashion occurred within the context of women’s growing social and political power, and how the the Parisienne haute couture contributed to the creation of the ‘new woman.’”

Steele cited key examples of “the demi-monde fashion mongers of Paris,” including seductively sheer tea gowns and a scarlet satin corset of the 1880s, which depicted the acceptance of female sexual display at a time when modest white corsets were typically the undergarment of choice. Steele cocurated the exhibition with associate curator Fred Dennis.

In connection with the exhibit, the museum will present a two-day symposium on fashion and the femme fatale at FIT’s Haft Auditorium on Jan. 24 and 25.