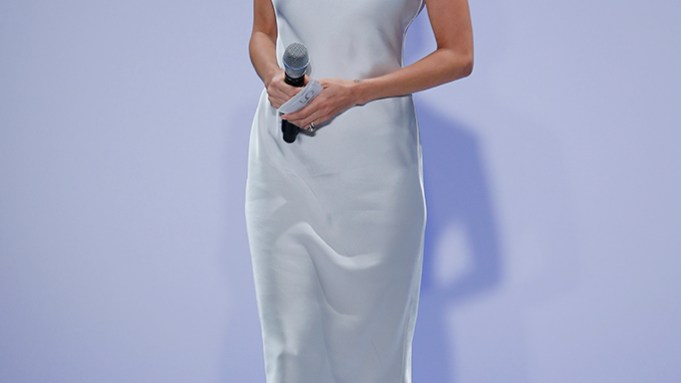 “Public speaking, I get a little nervous,” said Nicole Richie backstage before the Future of Fashion runway show at the Fashion Institute of Technology on Thursday night. “But this is fine,” she reassured herself. The actress, designer and TV personality was playing hostess at the annual event, which showcased 72 looks in sportswear, special occasion, knitwear, intimates and children’s wear from the school’s top graduating fashion design students.

The event, supported by donations from the Calvin Klein Family Foundation, Calvin Klein Inc., MAC, Chico’s FAS and Siempre Mujer magazine, began with remarks by Joyce F. Brown, president of FIT. “I want you to know we are celebrating our 70th anniversary this year,” she told the crowd. “Today we have almost 50 degree programs, and despite our name, they’re not all about fashion….In Fashionista.com’s latest rankings of top fashion schools worldwide, FIT came in at number six. I’m still trying to find out who the other five are,” Brown joked.

The show kicked off with strong outerwear looks from sportswear designers Sofia Menasse, Pona Chon, Julia Jiang, Suzy Kim and more, and the room erupted in smiles and laughter during a parade of children’s wear worn by miniature models. (Right after the kids’ clothes came a series of barely there lingerie looks — quite the transition.) Front-row guests included Calvin Klein’s Francisco Costa, jeweler Lorraine Schwartz, Nicky Hilton and Valerie Steele, director and chief curator of The Museum at FIT.

Richie, who read her opening and closing remarks off of note cards, said she’s skipping this year’s Met Gala to tend to some business in her home base of Los Angeles, including a venture into children’s clothing under her House of Harlow 1960 brand. “I started my first introduction into design when I was a figure skater…around age 10,” she said. “My daughter’s not much younger than that now, so I’m definitely going to empower her to have a say [in what she likes to wear]. Nobody can tell you what kids like more than an actual child.”